I made this in mid-April, and I was thinking we would actually get back to school by May, or maybe for June (we usually go until almost the end of June). I bought a bunch of athletic jersey online and then found out it has only 2 way stretch. I haven't done much with it because 4 way is more comfortable. I did use some of this colour to make Rob some boxers. He seems okay with no vertical stretch. I'm not sure how. I tried making underwear for myself and could barely get it on.

I thought "Plitvice" by Itch to Stitch would be a nice option. I'd been wanting to make another one and just decided it was time. There were some adjustments I wanted to make (bit longer, more drapey). I hadn't done a FBA on the original, and I'm not sure now if I did one on this version LOL.

Okkkkkaaaayyyy.  I didn't remake the Plitvice! Looking at the photos, I'm like....what? That's not the same shirt LOL. Now I have to  go down to the basement and look through my patterns.  It was actually Simplicity 2938. 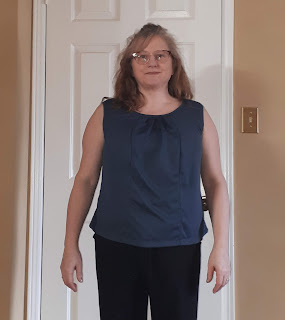 The gathers don't really float all the way down. I hate how it flares out at the bottom, though the sketch does show that happening. I tried on another shirt I had made years ago, yesterday, and it did the same. Don't like that. I thought it was good that it doesn't read as athletic material from a distance. 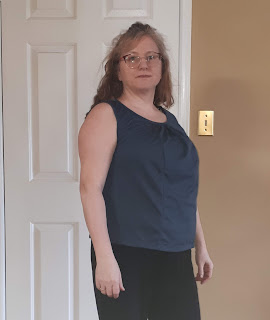 It feels a little tight around the arms. I did bands, and may have stretched them too much.

I haven't worn it since LOL. Maybe now that it's summer I'll wear it again. I like that it's dark, but not black. I don't have much in the way of "serious" but not dressy clothes that are darker. You know, sometimes you don't want to wear your little black dress, but your bright pink outfit doesn't fit either. I'm sure I'll wear it when ever work starts again. My teens said it was acceptable, so that's a good thing.