Hi!  A lot of people visit this page to find out how to make a peanut butter jar costume.  If you're one of them, welcome!  If you make your own, please link back to here, and send me a note at tracykm at yahoo dot com.  I'd love to see what you make.  Also, this year (2013), I am making a strawberry jam costume to go with the peanut butter one!

Halloween has never been the most happiest holidays at our house. I think first went trick or treating when he was 3 1/4. I know when he was 2 1/4 I was a week away from delivering Lucy, and I'm pretty sure we didn't take him out dressed up, but went out a little later to show him the decorations and pumpkins. I don't believe in taking kids out until they can understand it a little, and walk further than one block. With Huey, that took a little longer than other kids :) Between his perfectionism, his low tolerance for frustration, and the Canadian climate, we rarely got through a Hallow e'en without tears. Until this year.

Lucy had a few ideas running through her head. She finally decided on Tinkerbell. I did not want to purchase an over-priced skimpy piece of poorly made costume that Disney thinks is acceptable. We surfed the web and decided to create our own pattern. I carefully measured and drew a fabric layout, and we bought 1m of "Halloween Satin" from FabricLand, for $3.99. We got some light green organza, and found an end cut of ivory organza that was probably a drapery fabric. It's hard to see, but there are 7 green petals, then 7 green organza petals staggered (it was supposed to be just 6 petals, but ahem. The design engineer wandered off before everything was laid out). Under that is the cream organza, cut shorter, just for extra "petal slippage protection". LOL. 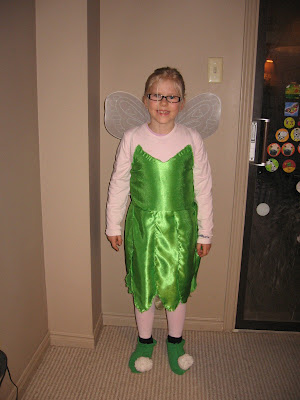 Lucy did not what shoulder straps of any sort. But how to make the dress stay up, and keep her warm? She found some "velcro" adhesive dots in my sewing stuff. We used them at the points, stuck to a pale pink shirt we found at the Salvation Army (for $1...brand new, high tech kid's athletic shirt!). That didn't work too well, so I got some double sided clothing tape. She's got several shirts on the above picture, actually.
I started with hemming the petals, as this fabric frays terribly. It looked awful. We decided to zig zag the petal (and top) edges to create a frayed, petal texture. So much quicker too!
I bought two pairs of white nylons at the dollar store to make the wings, but then found wings at Value Village for $3.99, so the nylons went on her legs. She wore pink leggings, and over that the two pairs of nylons and that's how she got the perfect pale pink legs. I also knit her a shawl on the knitting machine (as a way to try out a new technique!). For her bootees, I got a suede skirt from a thrift shop ($6; was a little more than I wanted to spend, given how short it was), and found a pattern for fleece bootees but used the suede for the bottoms. She wore them over her shoes. I made the pompoms :)

Meg is easily persuaded to dress up in anything. Last year she was Spiderman, just because we had the costume. She had a lot of ideas this year, but then we were looking at costumes and found this figure skater dress on the rack...for $1. How could I say no? We even found purple skate guards to match, she had purple 'bike' shorts underneath, and I made her purple legwarmers. Some purple earmuffs would have been a good idea. Ooops. LOL. 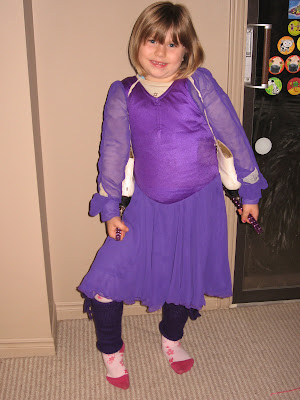 And Hugh. What would he come up with this year? He gets big ideas that are just so difficult to execute or wear. He said he wanted to be a jar of peanut butter. WTF? LOL. How on earth do you make a peanut butter jar costume?!

I started out looking at hoola hoops. WAY too large. Thought about using piping of some sort. Then, while I was looking at yarn at the Sal. Army, Meg found these really large (18") embroidery hoops (2 hoops is a set). For $1. Hugh and I went to FabricLand together to search for peanut butter material. He really wanted something shiny, like the jar, but the fleece was on sale ($6.99 for a meter of solid), and it's warm and easy to work with. One meter was sufficient. For the label, I remembered my old projector...put a picture under it and it enlarges it onto the wall. We just happened to actually have a jar of Kraft pb, although it was creamy, not crunchy. So I just moved it around and used the letters in the French and English words to get most of the letters for crunchy. Then, while colouring, he tells me it should be Chunky. A quick search on the Kraft site showed it is Crunchy! Phew. I traced the bears, Kraft sign, and letters onto white Bristol board, he coloured it out, and Daddy glued them to the green Bristol board. Getting it attached to the fleece was tricky. I used safety pins, but would have preferred about 100 staples. 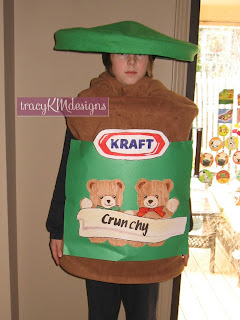 The hat/lid. We had some ideas, but not until we got working did it come together. We used the left over fleece from Lucy's bootees, and some foam core board, fastened to a tennis hat. After Friday's school party, I got a package of peel and stick vinyl from the dollar store and 'laminated' the label, which gave it some great shine and a bit more oomph. We were worried about rain/snow for Halloween, but it cleared up. Everyone loved Hugh's costume. You know you have a cool costume when even the teen aged boys are excited by it!

Overall, the costumes are not really cheaper to make on our own; it's the little things that add up, like wings, stick on crystals for the face, etc. But the satisfaction of being able to say "We made it ourselves" is priceless. This was probably the BEST Halloween we've had! You can't put a price on that either!
Posted by TracyKM at 9:36 AM

How did I miss this? The girls' costumes are awesome, right down to the little details. But your son's costume? The PB jar? AWESOME ON A STICK! I hope it still fits him when he's a bit older and can go to costume contests. He can get some friends to dress up as Jelly and Toast...you did a great job!!