In the Yahoo USM/ISM group, there is a fairly new member who runs a charity that donates much needed baby items to hospitals and families. She does incredible work, running this organization from the goodness of her heart. One of her current focuses is knitting and sewing baby cocoons for her local hospital. Baby cocoons have been popular among baby photographers for awhile, for a cute and cozy look. They've become popular among new moms now because they are cute and cozy and easier to manage than blankets or swaddling. It's like an external womb :) 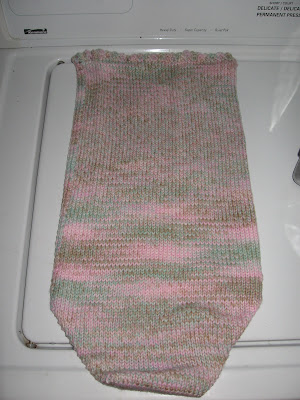 She has started making them on her Bond, and there have been a few attempts to write patterns, and one other member make a YouTube video that got me thinking. The first pattern on Yahoo involved using a garter bar to do decreases at the bottom. The YouTube video involved using short rows, but also having to graft parts together. I thought that was too much work. So I made my own pattern :)
This pattern is now on Ravelry; if you make one, please consider adding it, along with any changes you made!

Cast on 50sts. I used a chain cast on with the latch tool because it matches my cast off, and I didn't know at the time what I might do for edging.


Short row down to having the center 20sts in work, 15 sts on each side are out of work. To do this, pull the needle on the side closest to the carriage, out to hold/D position and knit across. Pull the needle on the edge closest to the carriage now, out to hold/D position and knit across. Now, pull the next needle that's in work on the side next to the carriage, out. You don't need to wrap the needle, it will do it by itself. Knit across. Keep doing this, pulling the next needle into hold and knitting across. Look for videos by Diana Sullivan on YouTube :) And make sure to have a claw weight under where the stitches in work meet the stitches being held.


Once you've got 15 needles pulled out on each edge, you've got to reverse the process, this time, putting the first needle of the group of needles on the side furthest away from the carriage, into C/upper work position and knit across. No wrapping needed.


Now, we're going to work up the backside, seaming as we go. To do this, on the edge away from the carriage, find the first edge loop after the short rowing. 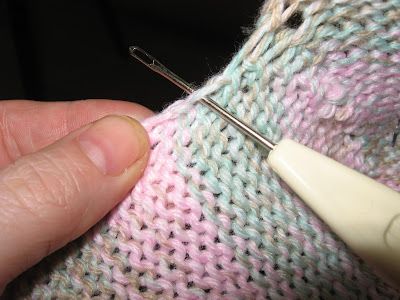 You'll notice on the edge that there is a tight stitch (a knot) and then a loop. Stick the transfer tool through the loop, and put it on the first needle in work on that side. 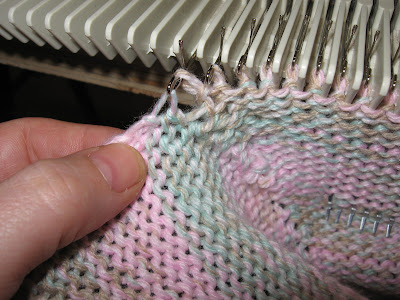 Knit across. Do the same for the other side, and knit across. 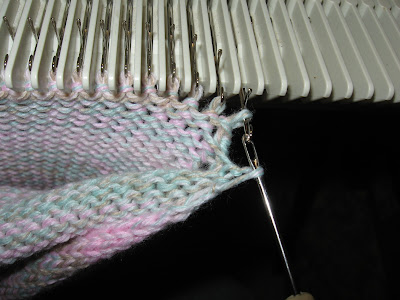 Sometimes, it can be hard to see which is the next loop to use, but if you just pull it out a little, you'll find the empty loop. 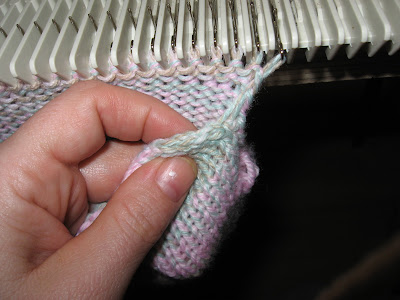 Do this, joining one side to the first stitch on that side, knitting across, for 100 rows. You're back at the top! Cast off. 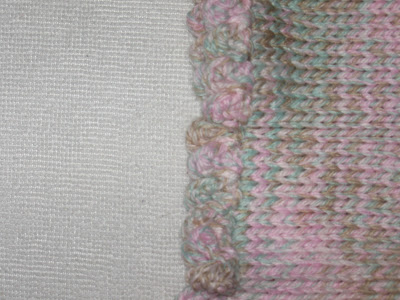 I did a little pie crust trim across the top, using 3 sts, and 6 rows. I used every cast on/cast off stitch, and I probably could have skipped a stitch in between each loop as it's a bit thick and heavy. I also steamed it a bit to help the curl. I also steamed the seams. 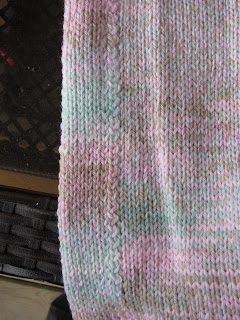 This was a super fast project! The first side, down to the tip, took about 15 minutes (I'm slow at casting on, LOL). The second side also took 15 minutes, doing the seam as you go slows you down a little. The pie crust trim less than 30 minutes I think. It's about 10" across and 18" long. I couldn't find a definitive answer on what size it should be, but about 16-18" long is good.
I hope you make one or two, or 300, to donate somewhere too!
Edited to add: Thanks for the great response to this pattern. It's been suggested that it could be snugger around the neck. I think you still need stretchability, to get a wiggly baby in. Instead of casting on fewer stitches, I'd still cast on 50st, then knit about 3 inches, and convert the previous 2 inches to ribbing, leaving the top 1 inch to either roll over, or to add an edging to. If you have a ribber, doing the whole thing in ribbing would be awesome....it'd be more close fitting but still very stretchy.

I have finally seen another version of this, SO cute!  Check out THIS post!  And for a few other options (and what NOT to do!)...I'd love to see what you've done with the pattern!
Posted by TracyKM at 6:48 PM

This is exactly what I thought of when I saw that video with the casting on the extra sts and then sewing. So glad that you proved it can be done, thanks so much for sharing your experience.

That is really cool! The photos really help me understand what you're talking about, the explanation of how to do the short rows too. Thanks!

Thank you so much!

since I do hand knit I was thinking of open edge cast on and off, pick up the stitches hand knit a couple inches of rib to snug it up a bit at the neck.

Hand ribbing would be nice; I was aiming for something done totally on the machine and I dislike latching up ribbing, LOL. Although you don't need to snug it up too much, since babies don't have necks, so it doesn't need to fit too snugly, but the ribbing would be a nice no-curl edge, esp. for boys.

Thank you so much! I love this tutorial as I am fairly new the the bond and a visual learner. I will post a link to your tut on the ReliefShare.org/wordpress blog - it is wonderful - our volunteers and donors will enjoy it.

Thank you, "dec2057". That is a great organization and I'm glad the pattern can be used by their volunteers.

I have made 2 of these today. You are so clever! Thank you so much for the great tutorial. NOW--How can I make a little matching hat? :-)
Ruth

I noticed the query about the hat. All you have to do is make a cocoon but smaller and shorter. If making a cocoon with 80 stitches wide, make the matching hat with 40 or 50 stitches wide - depending on whether the baby is preemie or newborn. Knit for 4 1/2 or 5 inches and decrease - now you have a set. Please donate to your local hospital, homeless shelter, crisis center or send to Relief Share. It's wonderful to have an outlet for our craft projects. Instead of having a pile of 30 cocoons and hats sitting there, they can be getting used by the sick and needy (or your grandbaby, nephew, niece or new baby in the family). Support your local charities ;-)