A couple years ago, my son came up with the idea of being a jar of peanut butter for his Halloween costume.  At first, we were like, "Uh, no.  Pick something normal".  Then realized we could figure it out, and it would be a great costume for him--he would live on peanut butter if he could!

This year, my daughter thought she'd like to use the costume (they're at a different school now, though most of the kids moved to the new school when they closed their old one, but there's also 300 kids they didn't know LOL).  Great!  Re-use a costume!  I was so excited.

Then, she thought, "Wouldn't it be awesome if my BFF could be a jar of jam?".  Well....I wasn't too keen on going through the whole thing again.  We figured the second time would be easier, but there was the first hurdle of finding hoops.  We told her that if her BFF could find two hula hoops (or other suitable hoops), we'd go ahead.  I didn't have time to search them out.  Wouldn't you know...she had two matching hoops in her garage!  Surprise!  They were quite a bit larger than the peanut butter hoops, but oh well.  We had some debating about the hat.  We hadn't like the original hat too much, and this time, I had a cheap plastic table cloth for the lid material.  It turned out to be such a windy, rainy Halloween, that the had just didn't stay on her.  It needed a chin strap LOL. 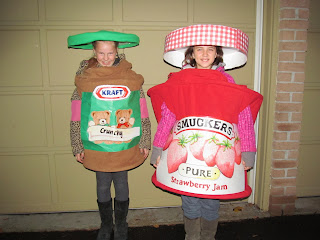 The arm holes were cut a little more to the front because the hoop was so large, she wouldn't have been able to bend her elbows and hold her bag, LOL.  This meant that the label had to go below the holes.  If we had known this before, we would have made the label smaller. 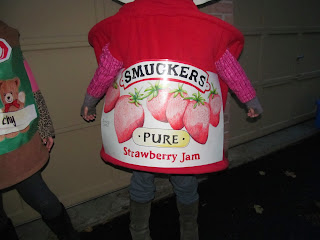 And what did the original peanut butter jar guy go out as this year?  He hadn't been able to come up with an idea, wasn't even sure he wanted to go out.  We couldn't find the spirit gum to affix the wearwolf fur to his face.  But then we just started pulling out stuff, and we put together a rich dude look.  That's fake money he's pointing to in his pocket (click on it to see a bigger image!).  As he was getting ready to go out, the girls thought he looked like Macklemore (a singer).  Then, I heard him say he was a pimp!  OMG.  That hat and coat had been used as a pimp costume before, but I didn't want to say it! 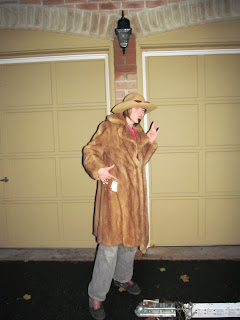 They went to the neighbour's, and then the neighbours came here.  Katie asked if that had been our kids just at their house, and what was our son?  I said "a rock star" and she said she wondered if he was Macklemore, or if he was a pimp, but she hadn't wanted to ask him that, LOL.  So, either way, I guess his costume was effective!
Posted by TracyKM at 11:52 AM