A lovely repeat client messaged me about making "pillow beds" for her two young girls who often come into her room in the night and have nowhere to sleep.  My initial reaction was no way.  Sewing, and all that stuffing...then I remembered about something I had seen on Pinterest.  They had taken a sheet, sewed it up making 5 compartments, and stuffed each one with a pillow!  I suggested she pick out a couple sheets that matched her room, but she wanted these to be for the girls and wanted something soft, like fleece.  And instead of a pillow sham opening, how about a zipper?  And not five pillows, but maybe three?

Fleece is not cheap but does come in a lot of patterns.  I thought a long zipper was going to be expensive, but the store had 60" "duvet zippers" in colours that worked well, for only $3.50 each (I think that was the price, maybe $3.75). 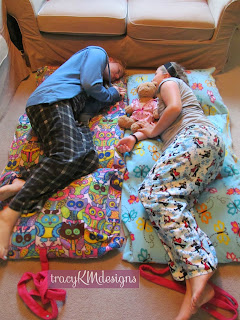 (My girls are much bigger than the girls these were made for, but they still thought they were really comfy!)

My first attempt at sewing on the zipper was not good.  My fabric was 60" long, but when I got to the end of the first side of the zipper...I had a lot of fabric left.  The zipper was quite wavy.  I had somehow stretched the fleece as I sewed.  So, I unpicked it and used pins this time, and got a much better result.  When I did the top stitching for the divides, on the first one, somehow the fabric shifted and the zipper ended up not being exactly on the edge, but in a bit.  I think because I did the dividers first and then the top and bottom seams.  On the second one, I did the top and bottom seams first, and that held it together better.  I even remembered to check the fabric pattern to see if there was a distinct top and bottom! 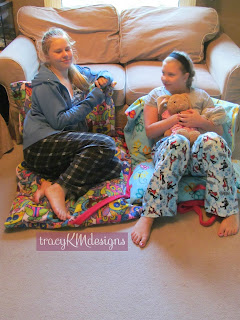 I was proud of myself for remembering to include the strap when I did the bottom seam...and then forgot with the second one.  When I first held up the pillow fabric, I thought I was going to end up with a strip left over, which I could use for the strap.  It just seemed like a huge piece of fabric.  There wasn't any left over in the end so I found some bright pink fleece in my stash.  I think I like it better than a matching strap!  And I love the contrasting snaps (they have little hearts engraved on them). 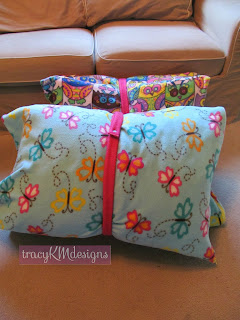 I really over thought the strap at first.  But once I had the pillows in, and folded it up, I realized I could snap the end of the strap to itself if I made it long enough!  So much simpler than trying to figure where to put the snap on the bed. 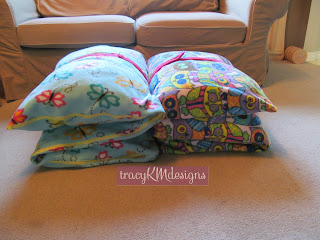 I didn't have very good pillows to fill them with for photos.  We really need new pillows!
Posted by TracyKM at 9:50 AM