When Mary Anne Oger ("MAO") posted the pattern for a red scarf for AIDS Awareness Week, last fall, I didn't really pay attention.  I was busy!  Then she posted about challenging herself, and her readers, to create 10 scarves for this year's campaign.  Mmmm...that seemed interesting!  I have a cone of a fine red yarn that just hasn't found the right projects.  I tried a tank top, back in my earlier days of using the standard gauge machine, but got bored and ripped it back into balls.  I thought it might be the perfect thickness for this new scarf.  Or, I could use it doubled, since I had a cone and several wound balls.  I started with it single strand, and that seemed to work fine.

I worked through the first ball, struggling with the cast on instructions, and changing all the settings so much!  I would forget one of the four things each time I got to the zig zag row--if I remembered to stop for it when the row counter was at multiples of 20-2!

I got to the end of the first ball, and the knitting was not the prettiest, but I felt like I was getting it.  Somehow, half the knitting dropped off!  It was an omen to start over and do it better! 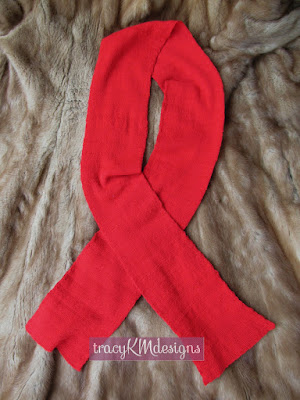 The yarn had been used previously, obviously, and although it had been balled up for quite a while, it still knitted with a bit of a waviness. 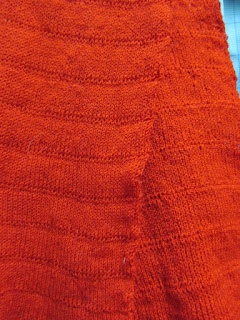 I steamed the ends, just to see how it would look, and there was much improvement.  I decided to wash the scarf in the machine, as I was doing laundry and the basement is a dust bowl right now.  Once it came out, I was a bit surprised to see it wasn't totally smooth (above).  I even hung it before it was fully dry, hoping for gravity to help.  Plus, I thought I did my calculations based on it being 6ft long and now it was only 62" long!  I stretched and steamed and got it to 64"  Then I went back to the pattern and the blog and saw it was supposed to be 6x60".  Phew! 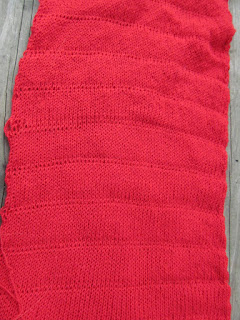 I decided to steam the whole scarf, and it looks so much better.  Almost "commercial"!  This picture shows the bottom half steamed smooth and the top half just with being washed.  My edges seemed uneven but I noticed that it was just where the zig zag rows are.  This is a clever design for scarves...knit as a tube, but with zig zag rows that connect both sides, every 20th row.  So, it can't twist and will always lay flat. 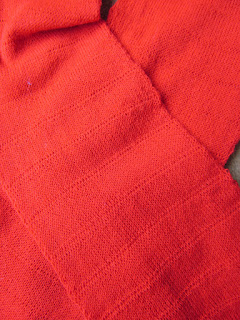 However, it barely made a dent in the red yarn (which isn't a soft and snuggly yarn, but a more dressier yarn)!  Good thing there's 9 more scarves to go!!