I wanted to make another sunhat and this time really pay attention to how I laid the pieces on the fabric to cut out.  I was at Michaels and saw their fat quarters.  I was drawn to reds.  I looked at one but felt it had too much white and the black I intended for the other side would show through.  I looked at another one but it was "too" red.  I settled on a red with small white polka dots.  Cute, but not "baby".  I had some black with beige flower embroidery on it for the other side.

I carefully laid out the pieces of the crown so the "stretch" would be going across.  One piece of the red fat quarter seemed a little stretchier than the other.  The black had less stretch because of the embroidery.  I also cut the interfacing in two pieces, with a small overlap.  I wanted to see if this worked on my own hat before doing it on one for someone else!  I totally think it worked. 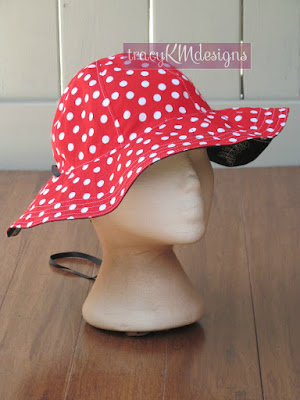 I sewed the red brim on first.  I had pinned the 1/4 marks, and it went fine until the last 1/4 section.  I ended up with more than an inch extra brim.  Instead of panicking and ripping it out immediately, I set it aside and sewed the black brim on.  It went on almost entirely perfect, maybe 1/2" brim left over.  So I ripped off the red brimmed and tried again, had to try a few times and I think in the end I did have to take in the brim seam a little bit--1/4" from each side of the brim seam? (I left the outer edge the same, but tapered the seam towards the crown).  The brim looks a little pulled in a few places.  I didn't have a red thread that matched close enough, so I used white. 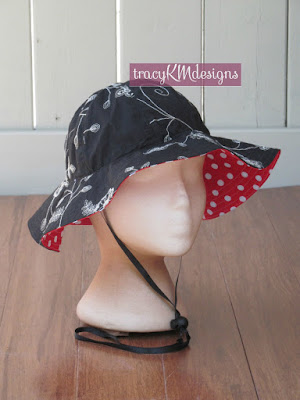 I did the first round of brim top stitching really close to the edge to make it easier to close the gap I left for turning.  I also clipped the seam in that opening to make it lay flatter while I top stitched.  I think I trimmed the entire brim edge seam before I turned it.  When I went to do the second row of top stitching, I couldn't find a marking on my machine at the right distance, so the distance from the edge to the 2nd row is the same as between the 2nd and 3rd, and 3rd and 4th, etc, but the edge top stitching in between the edge and 2nd row.  If that makes sense.  I opted to top stitch on the crown this time instead of the brim.  I thought this might look a bit smoother and prevent any tiny pleating if the brims were slightly off size.  I think it looks fine.  I think this might also be contributing to the smaller size.  Then I remembered to add a ribbon, so I had to unpick a bit and hand stitch it in, etc.  Whatever.  It's done.

During the process, a few people mentioned it looks like Minnie Mouse.  Then, when it was finished...I realized that I also have a red nightgown with white polka dots.  Yup.  My sun hat matches my nightgown.