Just before Christmas, a picture of a woman wearing a messy bun hat appeared on Facebook. Overnight, it was a viral hit and everyone wanted one. I posted right away on my page that I could not make any for Christmas, but if anyone was interested, I'd look at it after Christmas. There was still quite a bit of interest.

One woman who had ordered mermaid blankets before Christmas was interested in getting one, in blues and greys. Now, you'd think that would be a common colour combination. The original photo going around was a subdued jewelled multicoloured yarn with what seemed like a slight fuzz/texture. It was likely Red Heart "Unforgettable" or Mary Maxim "Studio" (not enough fuzz) or Mary Maxim "Prism" or LionBrand "Amazing". Of all of these, "Studio" was the only one with a blue grey mix but the picture was tiny, and the yarn didn't seem to have the gentle fuzz.  I couldn't believe that I couldn't find a blue grey mix in a slightly fuzzy worsted weight yarn.

I put my thinking hat on and immediately thought of the dye pot. I just happen to have an abundance of Patons "Lace" in Porcelain. All it was missing was the grey. And thickness. I have black dye and have used it to get grey before. I figured I could wind off the yarn and dye the white sections grey, and maybe some of the blue because the colour changes are long.

I should have thought a bit more. I figured I wanted three strands, but I really should have wound them together instead of separately. Anyway, I did get it dyed and was pleased, although I would have liked shorter colour runs and more grey. 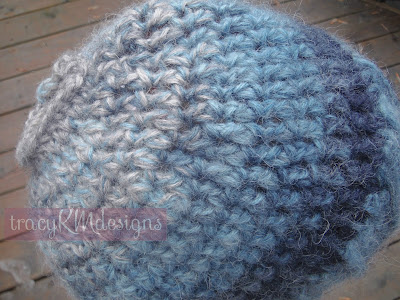 I got going and whoa, was I surprised at how long the sideways "crocheted rib" band took!!  I had some concerns with this hat because the other one I made, I started at the elastic, at the opening. This one, I had to make the band, then pick up stitches and work upwards, then decreases and would I be able to crochet over the elastic going in this direction? My first couple attempts at crocheting over the elastic did not allow it to stretch much.  I realized I had decreased too many stitches because I was trying to get it to lay flat at the elastic. So I increased the number of sts over the elastic and while it now stretched nicely, it sits up a bit. I hope the messy bun covers it.   I did end up with several small balls of the yarn as I had to break it a few times to change colours and get more grey in the band part. 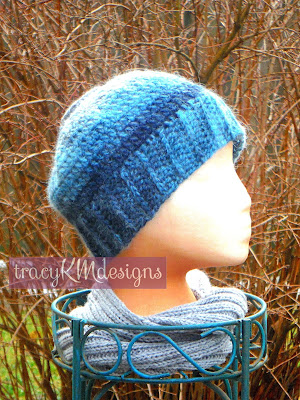 My regular camera is broken so I was experimenting with our waterproof camera. The original picture was a bit hazy and dull, so I used a "filter" in editing. It's interesting. Having grown up learning on a 35mm SLR, I try to do all the editing "in camera".  I'm not a fan of all the filters and "actions" that modern photographers do. You just can't believe any picture is really what the scene actually was, once you learn how photographers are manipulating photographs in digital editing.

She couldn't come get it right away, so I thought it would be nice to use the leftover yarn to make some simple fingerless gloves. Again, I had to cut the yarn to get better colour changes. It became clear though that I would not have enough. So I went down to 2 strands. By now I had a lot of ends that would need to be woven in. It still wasn't enough. So I THREW THE YARN OUT. Yes.

And then two weeks later found another ball (3 strands) of it in the bottom of my bag.