Where Did These Come From?

What a crazy first half of the year. Starting work as a substitute teacher (supply teacher, or occasional teacher are the terms in Ontario) right before Christmas really changed my life! And then I got sick in mid-February and had to take a pause. I spent a lot of time sitting on the couch, knitting. After the first few days, it was mainly an energy thing, as well as the brutal laryngitis. Finally got my energy back in mid-March and then got sick again on April 1 (Easter Weekend). That was a doozy. High fever, chills, couldn't sleep, then the sore throat, and then the cough. I couldn't even knit. It was so bad. Luckily, this time, my energy came back much quicker (but the cough stayed around for a few more weeks).

Somehow, in all that was going on, I managed to finish two pairs of socks. Just plain and simple.  The first pair I started mid-January and finished in early April. I think the yarn is Austermann Step Duett.
I did another "tomato wedge" heel. One seems to have an extra couple rows above the heel, or in the top wedge. They're very soft. The foot feels a smidge long, but it's okay. My notes say I used 75gr, but what am I going to do with the left over 25gr? Save it for mending. Fine, I'll count these as 75gr. 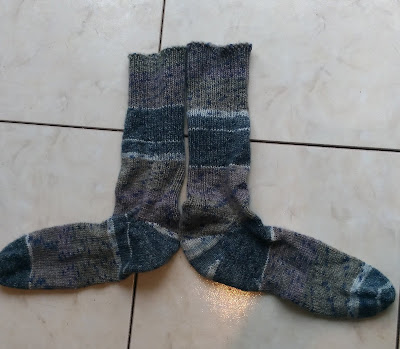 The second pair, I needed a new sock project quickly. I grabbed this yarn from my bin. I bought it from "The Heritage Shop" in Bancroft, a few years ago. There was a receipt in the bag, it was 2 balls Confetti sock yarn, $4.79 each. Total, $11.02. There are two taxes listed, so this person bought it before the HST. There was a printed pattern for kids and adult socks. No details on the pattern as to the creator. I thought there was a store price sticker on the label, but I can't find it at this moment. There was already one sock almost completely knit, but of course, not my size. These ones knit up really quickly. These ones are not as soft, though better after being washed. I went back to the Fleegle heel and they fit really well. 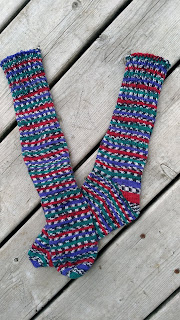 I certainly don't need green, blue and red socks. But I don't have much enthusiasm to knit.  What is there left for me to knit? I've barely worn the Campfire Cardigan. I have several other sweaters and cardigans I made that I don't wear. I even seem to have lost the teal crochet cardigan I made last summer. I have lots of mittens and scarves, and a few hats. Lots of shawls I use more as scarves in the winter. There's no babies in the family. None expected. My "In Stock" bin is overflowing. I sewed some slippers at New Years, so I'm not ready for my usual felted slippers. I just don't have the motivation :( I have started a little baby jacket, it was to be a simple knit, but of course, I had to go and change it up. I see new patterns, but think--none of my yarns are suitable, I don't want to buy more, will I really use the item, etc. I have A LOT of yarn. I had bought a lot when I started making newborn props. But that has fizzled. I can just "knit it up" but I can't seem to sell anything I knit unless it's a custom order, and usually then, I don't have the right yarn. Yeah, it's a vicious cycle! 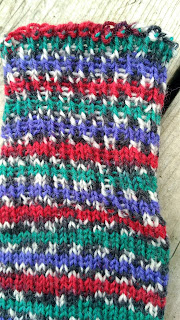 As usual, I got bored as I went up the leg. So I switched to a P1, K7 pattern. Then, after a bit, it became P1, K3,P1,K3. Then when I knew I was getting close to the finish line, I went for the traditional P1, K1 ribbing.  Oh, upon closer examination, that's not what I did. That's what I should have done.  A nice gradual way to give some shape and stretchiness to the top of the sock. Again, not sure of how much I used, but lets go with another 75gr. Okay, fine. I'll go weigh them. Lovely. Only 73gr.