I've Got the Greys

Argh, why do I do this? Sinclair Patterns was "retiring" a couple patterns. I bought the nice and simple slip dress pattern. Even though I already have one, made it, and wasn't really happy. And to make me scratch my head even more, I decided NOT to do a FBA. Why?!

I chose this grey fabric, I thought it was nice and cozy. Slip dresses are not supposed to be cozy. It was a tubular fabric that I had been sold being told it was a cotton lycra, similar to what I used to make my leggings last year. It's so much NOT like that fabric. It's thicker. I had cut some off to use as a waist band on one of the pairs of grey pants I made. And of course, even though I shortened the dress, I didn't have quite enough. So I dug through the stash, thinking a grey print would look rad. The girls vetoed them all, so it ended up with this grey athletic mesh for the back top part.

Then, the bindings. I carefully cut them, tried to iron them, sew them carefully....and they looked like crap. The fabric was just too soft. So I thought some fold-over elastic (FOE) would do the trick. I didn't have any that looked like it was intentional. Head to FOE Your Diaper. They used to be in the south end of my town. The map now shows south Oshawa, the return address was Courtice, and the phone number is eastern Ontario. So who knows where they are. Bought some grey, went away and didn't get it done.

Finally got it done at the end of the summer. And, surprise, it's not love. 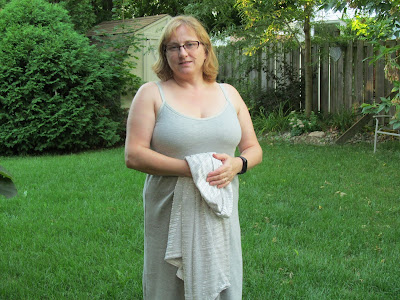 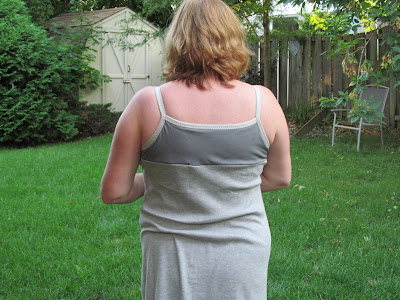 Oh yeah, I did a shelf bra. Took some adjusting to get it to the right length. Okay, it's not horrible. It's probably a great nightgown. Though I get all twisted. Whatever. Sometimes things are just not your dream project.
Posted by TracyKM at 11:34 AM