My daughter came home from skating one day rcently and told me about her coach's paint mishap, much like the Yarn Harlot's. A couple weeks later, Megan says I have to make her coach some slippers since they were ruined with the mishap, and had been new. I had asked Megan at Christmas if she wanted me to make slippers for her. Nope. I ask every year. I have this skating fabric, you see...Well, it was about time. 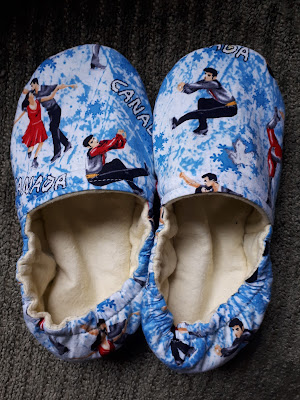 Stitch Upon a Time, Midnight slippers. They used to be free through the Facebook group. I was having trouble finding where my file was so I was going to download a new copy onto my new tablet. I found a post on their blog saying they were now on the Accessories page, and some items were no longer free. Well, they weren't there. I asked in the FB group, and apparently the pattern is being re-worked. No idea if it will be free again.

She loved them and they fit. So, time to make myself some new slippers. 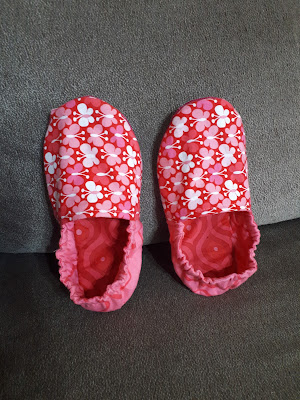 Somehow, I cut two sets of heel pieces from the light pink. And I didn't think about the direction of the print 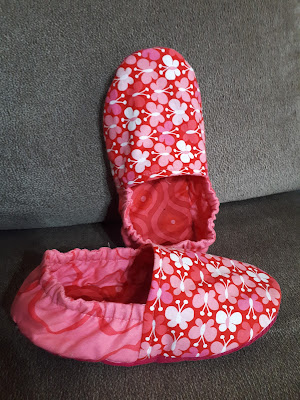 I also sewed the first slipper, second last step of sewing the three parts together.  I was pushing it, it was late, I was going to stop but no... Then I had a few attempts of sewing the inside toe closed. In the end, I saw the little dog ear on the slipper on the left in the top photo. I left it. At first I thought it was the left slipper, but when I saw the photo, I switched it to the right slipper.  It's so nice to have warm feet again.
Posted by TracyKM at 11:58 AM