Back at the end of last year, I got an email from a man, Jason, who found me through my website.  He wanted an old Christmas stocking recreated.  He's located about 45-55 minutes from me though.  I offered to find him a knitter closer to him, but it didn't work out.  And...I'm SO fussy, I'd be petrified that it wouldn't be up to MY standards, which are quite high sometimes.  Like, they wouldn't use the right weight of yarn.
He said he's sometimes in my town to get his motorcycle serviced and he could drop off the stocking.  He was coming to town on the one day I was going on a field trip with the school :(  He did drop it off though, and the fun began!

I searched patterns, and found out it's an old Knit-o-Graf pattern, by Della Fitch, from 1952.  There is a reproduction of the pattern available on etsy/ravelry...but it was slightly different.  I know I can chart this out myself, but it was still neat to find the original details. 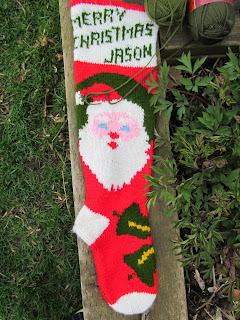 I had anticipated it would have been made with worsted weight yarn, but it measures up at 6st/inch.  Instantly, I think of Paton's "Astra", which is actually listed at 22st/4" (5.5st/inch).  Or, perhaps an old Mary Maxim yarn.  There haven't been a lot of acrylic DK yarns out there over the years.  Pretty much the only other option would be Sirdar Snuggly DK.  For a while, there was Paton's "Look At Me", but I think this was made before that was available.

A trip to Michaels, and I was able to get a very close red, the gold and the blue are also very close, and the pink, I had to go a bit lighter.  The "white" though...I'm sure it was probably originally white, but even after I gave it a wash (I could see some dirt spots), it's not a true white anymore.  Astra (and so many of the yarns) comes in a bright white, and an Aran...which is definitely a cream beige.  Same with Snuggly.  I picked out Loops & Threads "Woollike" in a soft white, and swatched it double stranded.  The colour is right, but the yarn has a bit of a sheen.

I swatched the Astra and got a good match.  I'm pretty certain the original stocking was steamed or ironed, so I tried it on my swatch and it looks very similar.  It has a certain flatness to the stitches.

However....the green.  It seems the current vogue for green yarn is emerald, or pale sage.  This green is a definite yellowy olive.  I went to a real yarn store, and the Snuggly DK options weren't very close. I dug to the very bottoms of my stash and could only find these two.  In the picture above, the darker one looks good. 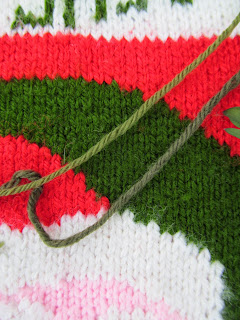 But in these two pictures...the darker one is not quite yellowy enough. 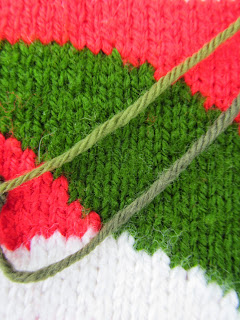 I'm not giving up!  I'm hoping to get into another store for a look at some more options.  He wants four stockings made, and I had explained that I while I can probably get a very similar yarn, the shades will probably have to be different.  He was okay with that...but when I get focused on something...I want to know I've tried all my options.  I happened to look at a Mary Maxim email last week, and found they had Mellowspun DK on sale...but the sale was now over...and there appears to be a close colour...