Where Did May Go?

I can't believe how fast May zoomed by.  I got only six posts done!  I'm not really busy with TracyKM Designs right now, so creating all those Mosaic newsboy caps, and all the caps for this post, was more of a "make work" project.  She wanted only two hats, LOL.  I made a total of ...15? 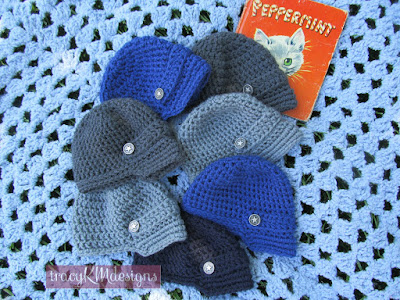 She asked for "two shades of blue, or grey".   I searched my stash, and although I had two shades of blue in Paton's "Decor", they didn't look good together, and didn't look fresh and modern.  I had a grey Decor, but not enough for two hats.  I have some other grey acrylic, but I don't think it's "nice enough" for a new customer's newborn twins.  I trekked off to Michael's, where the only worsted weight yarn that came in two nice shades of blue was LionBrand's "Vanna Choice".  Co-incidentally, it also came in two nice shades of grey.  Just in case she went with one grey, one blue. 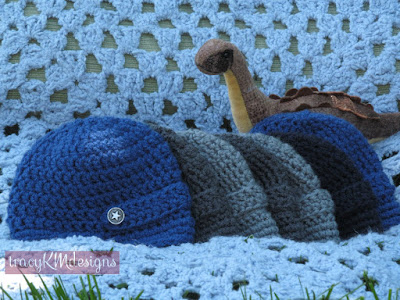 I started with a pattern I've use before from poshpatterns.com.  I did some altering, since the picture she had shown me, the hats were done in double crochet, and the Posh Pattern one in dc goes through the back loop only, I believe.  And I winged the straps.  They were a bit smaller than I wanted, but still looked good. 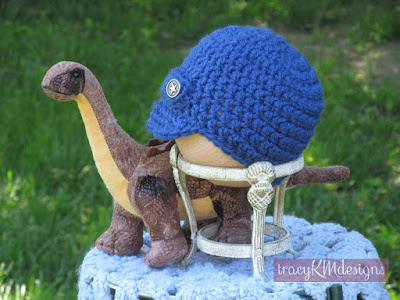 I tried to find buttons that would look good on all colours, and not be shiny bright--a big no-no for photographers.  These had a pewter and black look to them.

When I was photographing them, I remembered why I don't like the newsboy caps with buttons.  From straight on, the buttons look like eyes and the bill looks like a platypus.  Sorry!  Slightly longer button bands would have helped. 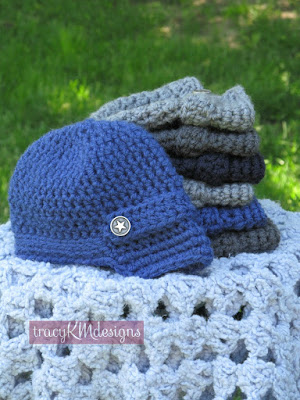 The client bought the two charcoal ones, so all the others are still available.  They are all NB, with the exception of one of the royal blue ones is more like 3Mos.

What do you think of my new styling ideas for the photos?  Pictures of just hats get boring!