Please don't ask me how long it takes to knit a pair of socks.  This pair is a great example of how it's never a simple answer.  I believe I started them early in the summer of 2014, when we were going to a Movie in the Park and wanted something simple to work on (in the dark).  Isn't that how it always starts?  "Something simple".  "Brainless".  Yeah, right.  Actually, these started before that...back in early 2010 I started to learn to use my ribber.   I made some socks, and tried this yarn--because I knew it needed to be knit rather plainly.  I think I made one sock, and it came out too big.  Rob said it fit him, but I knew he'd never wear them.  I always thought I'd get back to them but decided to HK this instead. 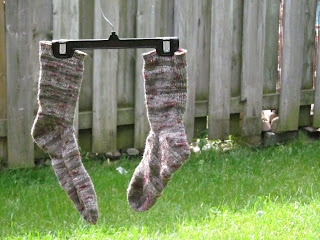 Every part of these socks, except the leg, got a "do over" at least once.  Starting with the toes, two at a time on one circular, I wasn't happy with the increasing.  I don't remember now exactly what was the issue, but I think I got creative and did some increases in the middle of the toes...and it created a pucker I didn't like.  And maybe the stitch gauge wasn't good.  I don't know. 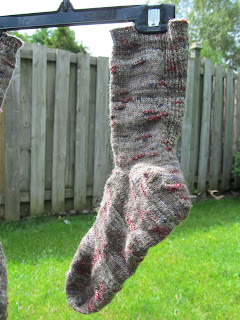 I also quickly got bored with the "simple knitting".  I played around a bit, and decided to purl the stitches that landed on top of red stitches in the row below.  This instantly made them inappropriate for in the dark knitting, of course. 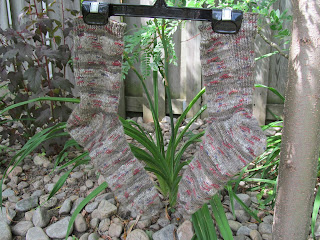 I opted to do the increases over the top of the foot--since that's where my foot increases.  But I wasn't following any mathematical logic, or a pattern...and I ended up not liking what I did, so I ripped back and did it over. 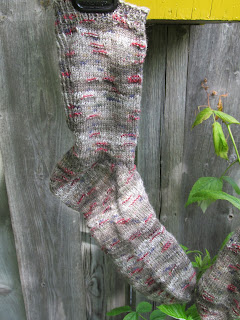 I wanted the Fleegle heel, but I didn't have the pattern with me at the time so I winged it.  I winged it wrongly, at least twice, before I got back to having the pattern.  Then I tried adding some short rows at the top of the heel, at the back since I have deep heels and normally do this.  It created a weird bubble, so I ripped back and did it over. 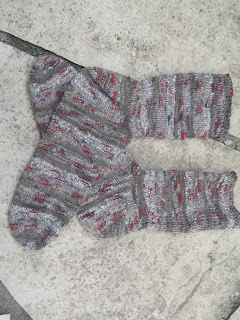 I was concerned they were a little tight around the ankle, so I did some ribbing at the back.  I have shapely calves, so I added some increasing at either side of the ribbing, incorporating it into the ribbing.  This actually seemed to work out, and there was no do over and the legs just flew! 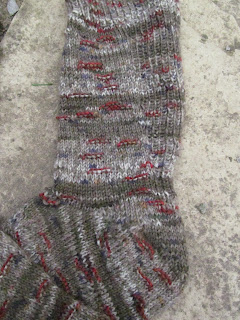 I would have liked to have had no yarn left over, but they were getting tall, so I ended with some simple ribbing around the top.  No fancy cast off, just did it "in pattern".
I haven't worn them yet, but they seemed to be functional.  A little odd looking,, both colour wise and pattern wise...but I don't care!  There is a time and place for odd socks.

I ended with a 2.5mm needle, though I don't know what I started with.  Not sure of the yarn!

Of course, I did buy a bit more yarn for the custom Christmas stockings I'm doing, and I got started on them.  And another pair of simple socks...so far, I've only redone the toes once! :)

oh they're really cute. I love the texture and interest. of course, I'd love to be able to 'knit in the dark' too, but we know better than that, don't we! haha. xoxo

Thanks Becky! Some day you'll be "knitting in the dark" too! Keep practicing!