My youngest, Megan, has a hard time with clothes.  She's 9, just shy of 5' tall.  Built solid, figure skating is sculpting her body but she still has a little belly...she prefers to wear her pants below the belly, but then they don't fit right, and shirts end up being too short to cover up the difference.  She likes simple clothes but not plain LOL.  I came across a pattern on Ohhh LuLu and thought it might solve her current obsession/need for "yoga shorts".  Back in 2011 when I first got my serger, I made her some "undershorts" to wear under dresses, using mainly old t-shirts.  It was a great way to experiment.  I don't think I showed them since there really wasn't much too them.

Megan didn't want the lace on the shorts, which was fine, so I lengthened the leg.  I cut a small for the leg and hip, then morphed out to a large at the waist.  I should have measured her thigh, but since she has muscular legs, I figured they would be alright.  I didn't expect them to be on the loose side. 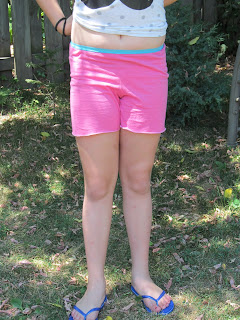 I found the instructions to be good, but I still had trouble visualizing how the gusset gets sewed in.  I like having the gusset though. 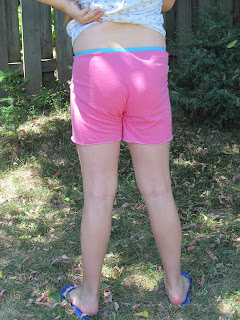 I tried doing a small rolled hem on the legs, but the fabric rolled up still.  After washing, the serger stitching came loose so I had to touch up both legs and did a basic serger stitch, and that seems to lay flatter.
For the waist, I used some glittery elastic from an old pair of her underwear!  I wasn't sure how to do though.  What I didn't realize until after was that you line the top of the elastic up with the top of the shorts, and stitch, and then trim the fabric on the wrong side!
The fabric was a Tommy Hilfiger bedsheet I had picked up long ago at Value Village.  I also made this dress from it.  She loved that dress and I still can't believe I made it LOL.  I still have a lot of this sheet left!  I made a matching headband for the shorts, but used a wider elastic from other underwear.

I'll probably make her some more, maybe even a pair for skating (they wear them over their thick tights).  Might make myself a pair, though my days of wearing a t-shirt and bike shorts are over LOL.  Would be nice for under a nightgown.  Like last summer when we went to family camp and I found out my nightgown was a little shorter than I thought, especially as I walked up the steep hill from the cabin to the washroom!