After fine tuning Bill King's "Gold Star" pattern to suit my liking (click on the label over on the right sidebar to see them), I found out about another one of his designs, called "One Piece Waterfall", in Machine Knitting Monthly, Nov 2012.  I picked up the issue, and a while ago, gave it a test run, using a slubby red cotton.  I don't think I blogged anything about it, although I remember it giving me some headaches and I think I re-started a couple times.  Even looking at the end result, I could see quite a few missed stitches around the eyelets.  Once I had it done, I was not so enthused.  I had planned to extend the arms, so when I got to the cast off/on for the sleeves, I used waste yarn.  But I hadn't cast off/cast on again, so once the sweater was off the machine, the armholes were actually closed up and I couldn't try it on.  Putting it over my shoulders...

It came down to my knees.  It was heavy!  There was red fuzz EVERYWHERE on my machine.  Other projects became more important and I put this jacket on the shelf--where I could still see it, hoping to re-examine it later. 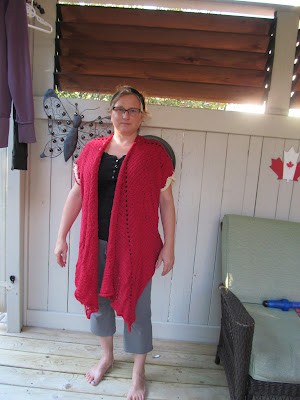 Later finally came this month, when my mom decided she wanted a family photo shoot and red would be one of the colours.  Knowing it could be quite cool, I figured now was as good of time as any!  I cut through the armhole waste yarn to make armholes...

Yikes!  Look how long it is!!  It hadn't been washed, but I doubted it would shrink enough to make it reasonable on me. 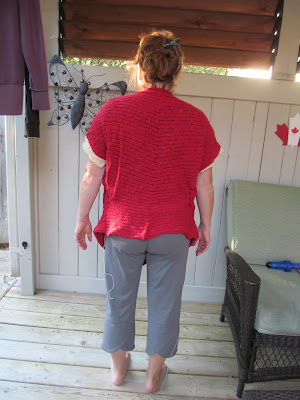 I liked the back though! 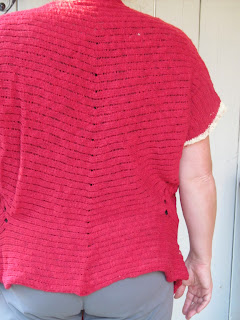 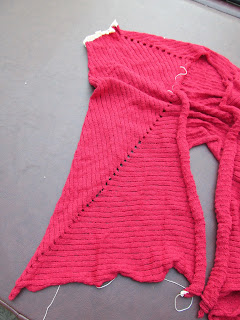 The front "waterfall" pieces were just so long!! 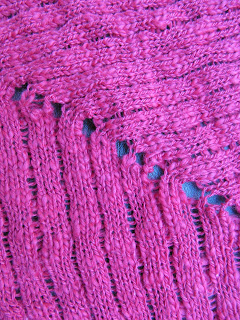 Here you can see the dropped stitches at the holes made when doing the short rows.

Of course, I didn't remember if I had taken any notes.  Like, tension?  Pbssst!  Just cast on and see if you can knit the first row!  Eventually I went from T7 at the cast on to T9.  I checked around on Ravelry, and found that making the waterfall panels with only two rows for each set of short rows, would shorten the front.  That sort of works, as the number of stitches is what gives the actual length, but the number of rows is what gave it the width, which when worn, droops to become part of the length factor.  If I do this again, I think I might stick with the two rows for the top 2/3, but then switch to the 4 row for the bottom third.  But I couldn't yet figure out which end of the piece was the neck and which was the bottom LOL.  I think the neck edge was the left side of the bed.

It started out really smoothly this time.  Until I didn't read the instructions for the back wedge properly.  I got to the mid-point and when reading the next bit realized I had done the last bit wrong!  That was a LOT of short rowing to rip out (I had put only one group of needles into work for each two rows!).  And then the gremlins started to appear.  My yarn was now really tangled, even though I had tried to be gentle.  Had to cut the yarn.  Had a thin spot in the yarn.  Dropped stitches.  I really started to fear I wouldn't get it done! 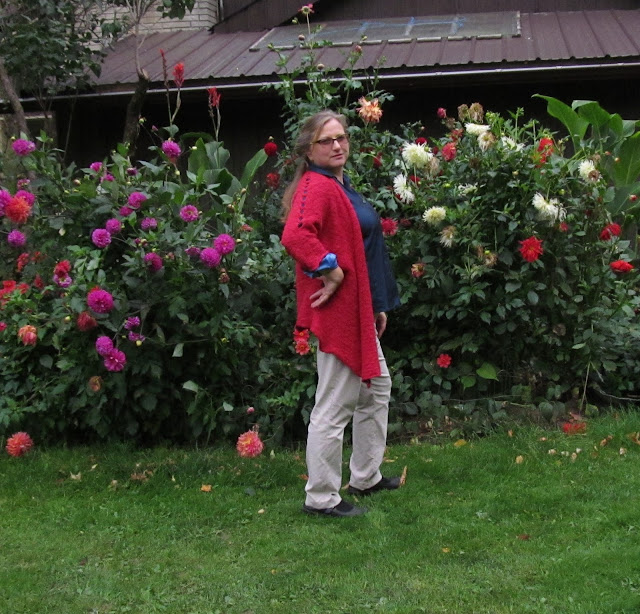 This has been washed, but you can see there is much less volume now at the front!

I got the body off, and went to do the sleeves.  I couldn't get the piece to stretch to put the entire sleeve onto the mainbed, so I did each sleeve in two halves.   Of course, re-hanging the second side of the sleeve meant you're dealing with upside down stitches and they don't line up exactly.  The texture of the yarn hide it though.  I don't know how it would look in a smooth yarn.  And then I realized I could probably have done it in the round (or U shaped) if I had used the ribber bed too (although that wouldn't change the one side of the sleeve being picked up from the half-stitches instead of full stitches...hard to explain, but if you've ever picked up knitting from the bottom/cast on to knit downwards, you'd know). 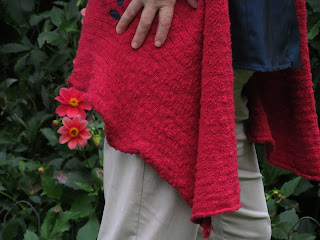 I like how there is a sort of panel that runs across the bottom. 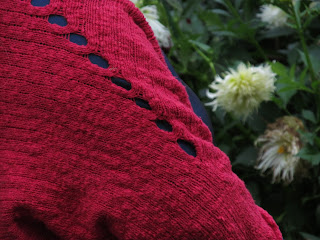 The sleeve eyelets formed by doing six rows (as per the instructions).  The eyelets end where the armhole is supposed to be cast off/on; where I picked up to knit a longer sleeve.  I was worried about that, but it looks fine. 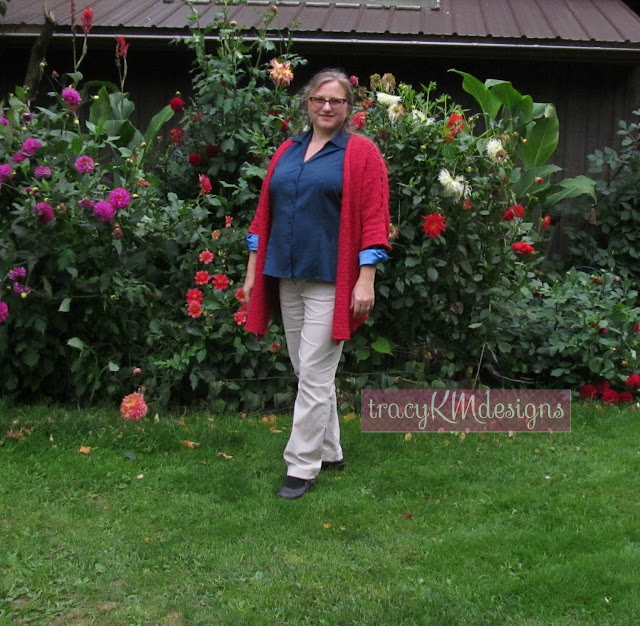 I decreased every tenth row on the bottom seam of the sleeves, but not the top seam, and did 60 rows.
I would have liked it to go more over my chest, so maybe the four rows for each group should be the top section.  I would have to look closer.  This is such a better length! 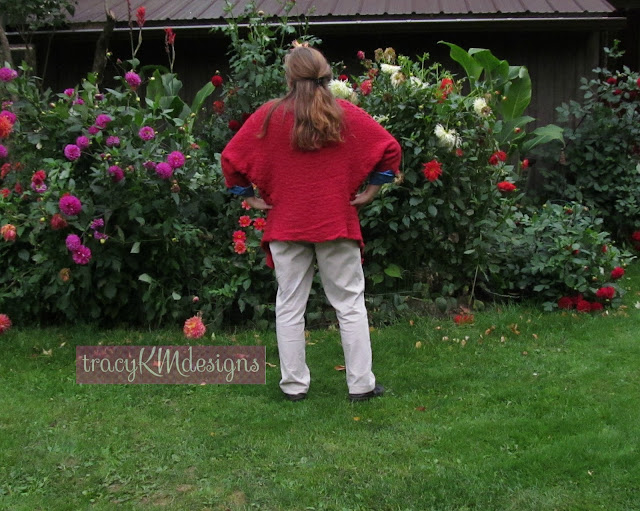 It actually looks a bit longer in the back than the original.  Partially because the original was still really rolled up as it hadn't been washed or blocked.

The unwashed piece left over from the original has a gauge of 29sts and 37 rows, measured in the 3x1 mock rib.  The empty needle spaces are more distinct, and this gauge does mean that my jacket was larger than Bill King intended.  The pattern gauge was 31st x 40 rows, so not a huge difference, but it could be enough to really change it.  The washed, finished garment has a gauge of 26st x 37 rows.  That would indicate that the finished garment should be bigger than the original unwashed garment, but what it seems is that the stitches bloomed and filled into the spaces left by the needles out of work.  This also explains why the back length is a bit longer than before, as that section has it's length determined by the stitch gauge.

Although this was not a "one day knit" as the pattern claims (maybe it could be, if you drink enough coffee and don't have to work and raise a family), I will certainly knit it again.  I like that it has much more shape and interest than the Gold Star jacket, and there is no seaming up of the two halves.  I really need a black cardigan.  Black.  Ugh.  Well, at least there's no transferring stitches and no seaming :)

I really like the finished product. I need to dust off my machines and knit some things for this fall weather.