Not too much to say about this set, except that I LOVE it!

And, like many of my items...the True Tracy Way prevealed.

I started with the hat.  She wanted gray, or white and/or black...pretty much up to me.  I didn't have much in gray, and was looking for a textured look to mimic the pink/rose/beige set I did last year .  I got out ALL my gray, white and black yarns.  I started with a combo of yarns...after a few rounds, it was obviously too thick for my largest hook (totally forgot I had a jumbo hook that doesn't fit in my case). I wanted to include some black and grey reflective yarn, but it wasn't working.  Tried again, better, got further, but not quite right.  Tried a few more times.  Finally got a combo I liked, though one yarn I was using, I wasn't sure I'd have enough so I sort of made a pattern where every third round I used it but the other two rounds I used a similar, smoother grey.  As usual, it took several attempts to get the right size.  I mean, I was even almost finished when I decided it was too big.  Finally, it all came together.

Until I put it on the wig head.

Ugh.  The yarns were awesome.  But despite looking great on my lap, once on the wig head, the shape was all wrong!  It was too flat at the end.  It draped weird.  It didn't slouch, it just ended and hung there from the weight/length.  Blah.

Started again (I mean...I had even sewed the flower on!  Wove in the ends!).  A few false starts again.  Much mohair up my nose.  But I finally nailed it.  What should have been a simple two day project turned into ...I don't know...a month? 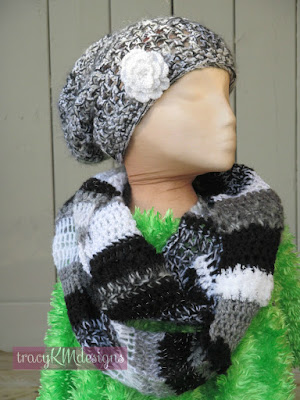 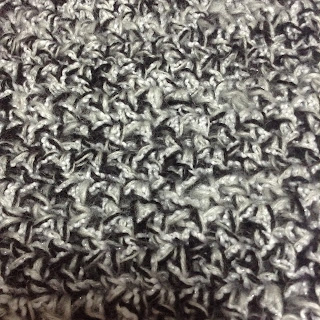 This is the hat.  I know the colouring is a bit off, but it was an iPad picture, inside...You can sort of see there are some rows that are a bit fuzzier.  That's the fuzzy gray yarn I used every third row. 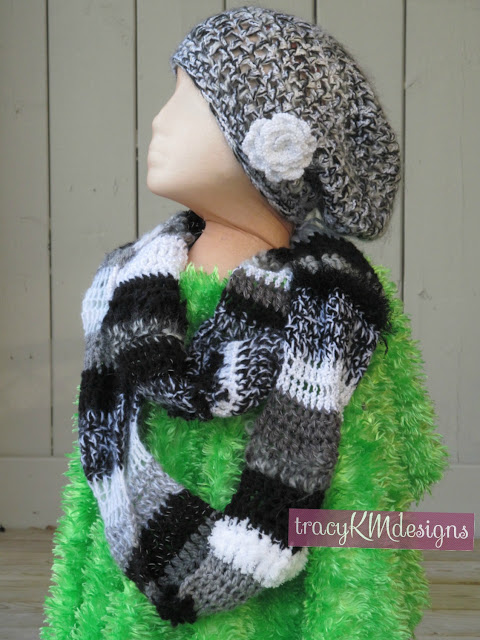 Again, poor colour.  You can see in the picture on the left there are bits of glowing white.  That's the Red Heart "Reflective" yarn.  What a great way to add a bit of safety!  Don't forget to steam liberally for even more drape.

Such a fun scarf, I could have kept going.  Stopped though so it could be wrapped two times around.  Might even be able to get a third time, if you like it snug.