Mermaid blankets have been the hot ticket on the internet this fall.  I had put my hand up a few times when I'd seen inquiries, but without one already completed, most people passed me by.  Finally, I hooked (get it?) someone!

She wanted one like http://www.ravelry.com/patterns/library/mermaid-tail-afghan but in pinks and purples and maybe a little glittery white.  No problem!  I love making girly items!  I was surprised though at how little plain worsted weight yarn I have in pinks and purples, that actually looked good together...and was in large enough quantities!  I started out, made a few tries...too wide...the white with silver thread didn't look right (too harsh!)...not enough of the dark purple I had, etc.

I had hoped to carry the yarns up the sides, but I had chosen an odd number of colours/pattern, and with each colour being just one row, it wasn't working out.  Tangles, too much extra yarn to carry around, etc.  So, I cut the yarn for each row!

I love the photographer's secret technique I used to suspend the tail so I didn't have to photograph it entirely flat! 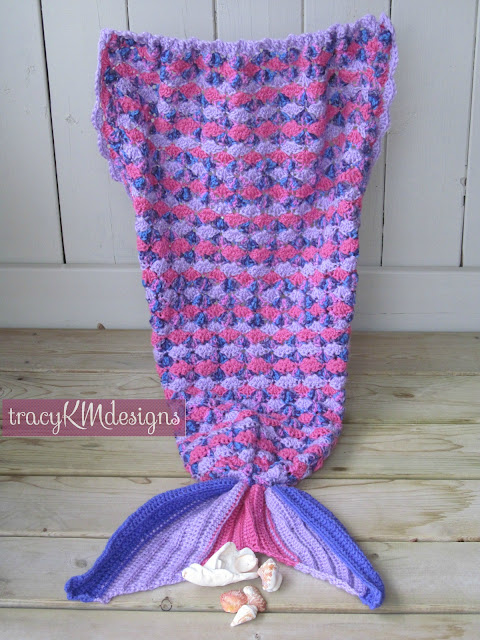 The final colour pattern I settled on was a 7 row repeat.  Long enough to make it look almost random.  There are actually two different pinks used, one matte and one shiny but almost identical in colour.
I got carried away with crocheting, and totally forgot to decrease for the bottom area!  The good thing was that by tapering it down, the yarn went further than before and the length ended up even better.
I was worried about it being too skinny so to tidy up the side edges, I did a few rows of the shell stitch up the sides, before sewing up the back bottom for about 10".  I seem to have forgotten to take a photo of that!  It seems some mermaid tail patterns create a sort of sleeping bag design, and others are flat like a blanket.  This pattern is a blanket style (it was supposed to be 50" wide!), and then stitched together at the bottom back to taper it in and create a cozy pocket for the feet.  Then the tail is sewn to the bottom, closing off the pocket at the same time.
I gave it a good steaming to relax the shell stitches and soften the acrylic yarns. 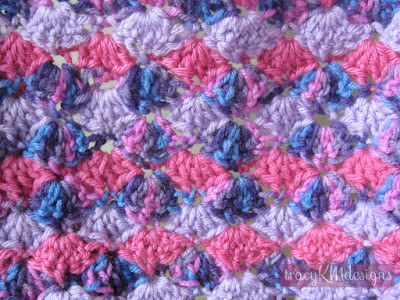 I think the fin took two attempts, the first one being too big and only getting a row or so in.  However, the second half of the fin--the increasing half on the right, took several attempts.  I just couldn't get it increasing enough to match the decrease half and I was 10 stitches short by the time I got back to the dark purple! 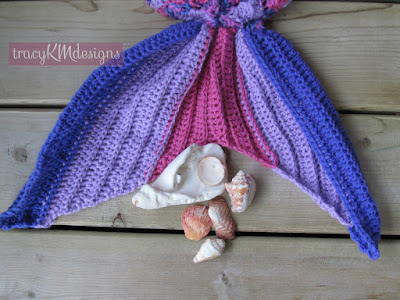 I ran a piece of yarn through the top of the tail to gather it in, and folded the sides over a bit before sewing it on the bottom.
To add a little dimension, I did every right side row around the post of the DC of the stitch below.  Back to front? to create a chain ridge.  I like how when I changed colours it created a neat effect. 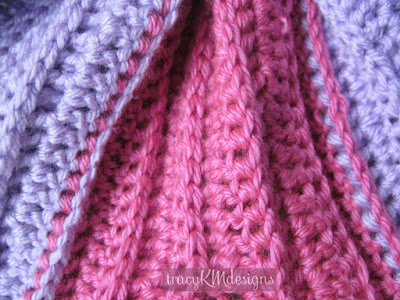 If I ever make this again, I will limit the number of yarns/colour repeat.   I actually had only four yarns in the body, which is good.  The pattern called for three, I think, and odd numbered repeats are usually more eye pleasing.
I am working on some more, but this time as a tube style, using two strands of LionBrand Homespun, one colour only!  So much faster!!