All three of my kids have tried knitting.  My oldest, Hugh, did a bit and said "nah".  Lucy learned, made a simple scarf, then did a couple fun fur scarves (that still need to be sold), her cat, and a hippo.  She started another cat but hasn't gotten very far.  She learned the purl stitch, short rows, increasing, decreasing, and figured out for herself that holding the yarn in the left hand made the most sense.  She's used circular needles, and I think she used them to do magic loop when she made the hippo.

Megan.  She is a dreamer, a creator, an inventor...but also was about 5 points below the cutoff for ADHD.  Her planning skills are weak.  She loves to start, and has a great mental picture...but lacks the stamina and skills to work it through.  She started knitting and I thought a dishcloth would be it.  Then she wanted to make mittens last winter, and I was a little worried.  I knew she couldn't handle the purl stitch yet, so I got her going on the garter stitch, sideways mittens.  She really did great, but well, making two identical mittens can be a challenge for even experienced knitters.  I did end up finishing them for her.

It's winter again.  She wants a new scarf/neckwarmer/cowl.  So she went to the basement and rooted through and came up with this really thick grey yarn and another yarn that I didn't really think she'd like.  Another search and she chose this bright blue.  Not really what I would have picked to go with her coat, but she liked it.  I wish I had looked for the yarn she used for the mitts but I figured this was just going to be a passing interest LOL. 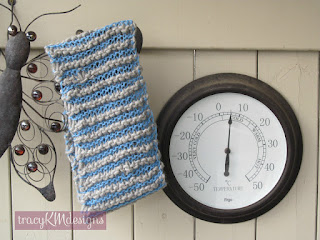 I think we were both surprised when she had it finished really quickly.  Like, less than two weeks! 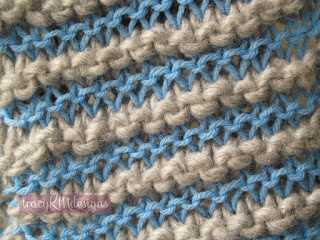 The grey is called "Pow Wow Machine Washable Indian Type Yarn", I think the brand is Kinsie.  It was made in Canada and has 25% wool.  The blue was a cheap acrylic.  It weighed in at 77gr.  Which is no where enough to make a dent at what I bought at Michaels last week!  I think I might be over what I've used up now.  But the year isn't finished!!