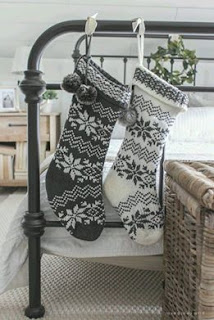 When I first got the inquiry about Fair Isle Christmas stockings, I was thrilled. I knew this was something I could do on my knitting machine and I thought the SK155 would be perfect so I could use a more substantial yarn that would be easier to find. The client liked the idea of a washable wool for a more traditional look, and a plain cuff.  I did some yarn research and thought yarn from www.knitca.com would work. I knew about Cascade 220 Superwash, but assumed it was too expensive for this sort of item. I headed over to Wool on William and discovered that the "white" was very creamy, the yarn seemed kind of thinner than I wanted, and she didn't have enough of any of the colours I was considering. Rowan Superwash Worsted caught my eye as I was about to leave--in colours for the other stockings I  was going to make. I forgot to look for  a blue and a green for these two stockings!

I was able to find the "ivory" (I asked the client if that would be okay, instead of bright white because bright white is exceptionally hard to find in 100% wool) at Knit Kabin, and she did have some blue that was great, but I thought the green might be a bit light. And since I had to go back to Wool on William, I decided to wait on the blue and green (also, the client hadn't sent the money transfer for the deposit yet despite saying she would several times). I went back to WoW and forgot to look at blue and green! So I had to head back to the Knit Kabin and got the two colours there. I had hoped that by doing the two orders in the same yarn, I would prevent having to make trips to several different stores. Four trips! But it's okay because I discovered how great these two stores are!! I ended up with 129 (Apple) for the green and I think 143 (Electric) for the blue. 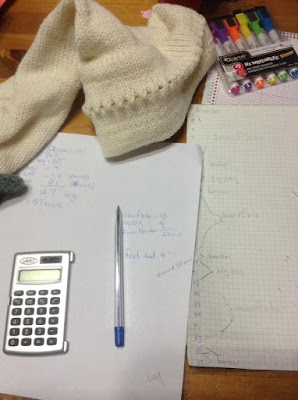 Once I had the ivory I started the design process. I started with Marg Coe's Christmas stocking  . I didn't know if I wanted the fold over cuff because I would be duplicate stitching the names on. The inside would be hidden, but it would be a little more fiddly doing the stitching. And it uses more yarn LOL. Once I got going with planning out the pattern sequence, I looked at the size and realized the original size discussed for the green and burgundy ones was kind of long and I should widen it to balance it out. However, the pattern was written for 60st, and I was using a 12st punchcard. If I added any stitches less than 12, the pattern would not meet at the seam. So I shortened the design a little and loosened the tension to T3. Depsite doing all this paper work and planning, the end result was quite a bit different, as once it was knitted some things just did not work well together. 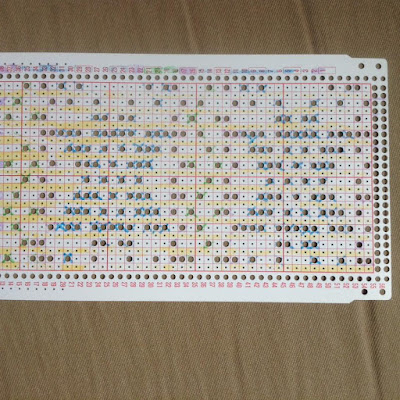 This was my first time punching a punch card. To make it more interesting, I was using a 24 st card for a 12st machine, which means you have to punch every other column. I highlighted the empty columns in yellow and marked my different designs in different colours. When using a punch card, the row that is showing in the device is not the row that is being knitted, so you have to be prepared ahead of time, which is why I used different colours, and then used them along the side to show the different patterns.   You can see how the blue section of numbers does not line up with the blue snowflake.  It didn't take me as long as I thought it would to punch the card, but the kids said it was too noisey. However, I assume a 24 st card would take twice as long! 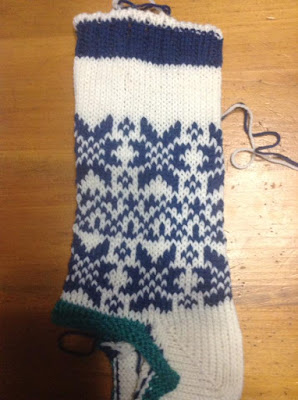 The first go round, I knit it as I had punched the card. I was not happy. I casted on with ivory and then remembered I was going to do the ribbing in blue to set it apart from the name banner. So I switched to blue after the circular cast on. I did not like how it went from the banner to the snowflake with no separation. And I really did not like how bunched up the patterns were, especially the section between the snowflakes! I had left one ivory row between the snowflake and the next section and instantly realized that my blue yarn was then on the wrong side for the next row. More tails to weave in.
I decided after the heel to take it off and check it all out. I planned a few more plain rows and tried again, this time determined it was the finished item.  I'm not 100% happy still though. I used two plain rows between each of the elements, but I feel this (obviously) separates them equally, and I wanted the little pattern above and below the zig zag to appear more "attached" to the zig zags. Since I don't want it any shorter, I need to do three plain rows around the snowflakes. Which means the blue yarn is at the wrong edge. Which means keeping my thoughts clear so I can take the carriage off and reset the pattern, etc. It was hard enough to remember to lock the punch card, and turn the cam to stockinette, (and other the other ones, make sure ivory was in feeder 1). 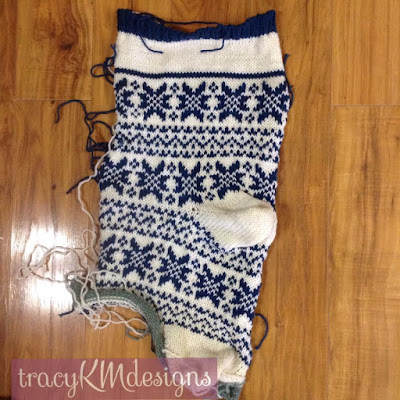 As much as I loved it, I realized a few things. I wasn't loving the blue cuff. There was an error in the punch card (you can see it in the section below the heel), and the foot was supposed to have decreases to taper it down. I decided to set this one aside and start on the other multicoloured ones, as she had been first with her deposit and should get hers first. 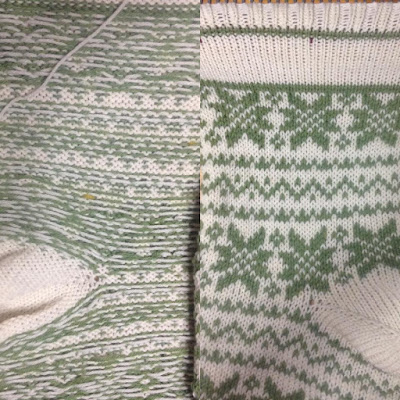 I got more of the design kinks worked out in the other stockings, including changes to the cuff and name banner. I knit the green one first. The left side is what you see when working at the knitting machine. So it's hard to tell if there's mistakes in the pattern. When I took it off the machine, I instantly saw the error--way up at the top!  OMG.  When I had been knitting these, I kept forgetting to transfer all the stitches to the main bed after the ribbing and several times had kept going with ribbing. I was pleased I had remembered this time, but in my excitement, I forgot the two rows in ivory before the first snowflake. 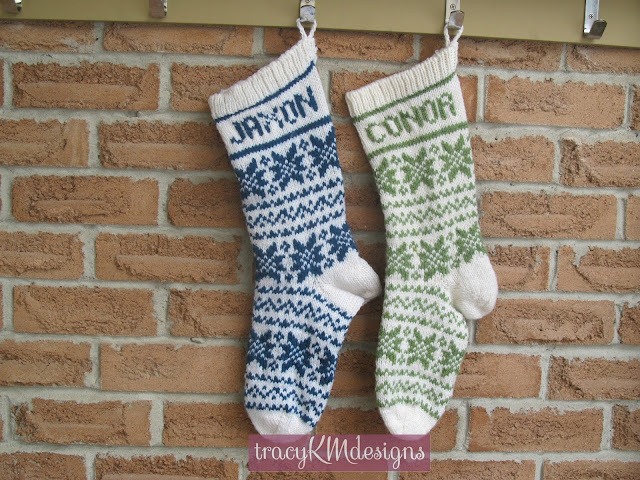 So yes, I re-knit it. Annoying, but that's the way it goes. I had all the usual troubles too, especially with the blue one, because I was re-using the yarn from the original test stocking and I had to cut the blue between sections. Again, I hand knit the toes. I think next time I will do the heels at T2 since they seem a bit saggy with out the structure of Fair Isle.

The yarn says to lay flat to dry, but I didn't. After their bath, although they felt so soft, I could tell that they would need heat to tighten the wool up again. It really grew when wet. There is no way I could have knit it tight enough on the SK155 to account for the growing. Drying in the dryer is a little nerve wracking. I had to check frequently and I was just so paranoid they would shrink too much. Once they were shrunk back to original size, they needed a lot of trimming of the resulting fuzz. I used my nails, and tiny scissors to trim the coloured fuzz so the designs stood out again. After washing, the Fair Isle gauge was 19 1/2st and 21 rows to 4" which is close to the label gauge of 20st/4".  I'm wondering if I can use this yarn on my standard gauge. It felt more like a DK, and I would love to have the versatility of 24 st designs--though I think the stocking should still be around 60st, so that would mean I would have to go up to 72st. Too much work. LOL.

These weighed 120gr each, which is right on track with what the Modern Vintage ones weighed. I have 64gr of green left, which means I used 36gr of contrast and 84gr of ivory. So, really, the Rowan Superwash Worsted is fairly cost effective--more so if making multiples of the same colours. Although I have 64gr of green left and that technically means I used 36gr, in actuality, the stocking probably has a bit less. Could I alter something to get it down to 33gr? LOL. I might as well just start building a stock of this yarn. It'll make nice mittens too. I have quite a bit of the ivory left and I thought it might be nice to dye, but there's more return on time by doing more of these stockings.