Many years ago I knit my husband a pair of "tipless" gloves, in charcoal Decor, all in ribbing. He was doubtful at first, but soon fell in love. Last year he let our son use them for his job (time keeping a men's hockey league--he has to be able to write down player's names for the goals).  All was well until this fall when Hugh lost one. And apparently I don't have have anymore charcoal Decor. Since they couldn't really share one pair of gloves anyway, and we bought Hugh two pairs at a store (gasp! Double gasp cause I went back and bought Rob the same two pairs LOL!)....I opted to make Rob a brand new pair, in 100% wool this time. Dark black. 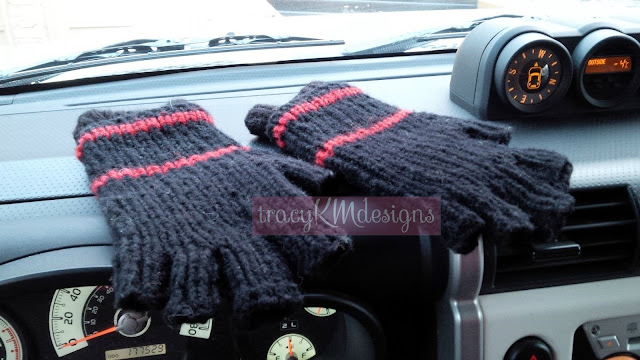 Once they were done, I thought the "cuff" were too short. I got bored and started the thumb gusset too soon. I kept thinking, "I should be doing this on the SK155" but then saying, no, cause then I have to seam them, and it's tedious with the fingers, and actually, it would be difficult to do the fingers. But really, next time, I think I will do up to the base of the pinky on the machine next time. Even after washing, the wool felt a little too "utilitarian".  I picked up stitches from the top row of the higher red band, on the inside, and knit a ribbed cuff in 100% alpaca. It does't extend too far past the bottom of the glove but it's still enough to ensure they're long enough.

I do not have a weight for these (or at least I can't find it). I think he's afraid to bring them into the house in case they don't go back out LOL.  So, I'm estimating. They weren't entirely done by Dec 31, but the intent was there. If they weren't black, I probably would have had them finished LOL!  Wow, I'm trying to find the original ones on my blog, and I found a pair I made for me, Dec 18, 2006. In the post I saw I made a pair for Rob "a couple years ago". Whoa. I had no idea it was that long ago--pre-blog. Those poor gloves of mine.  Got frozen into a snowbank near where I picked the kids up from school, had to wait till spring to get it out, then I found one in a puddle of slush in the Wal-Mart parking lot. Hadn't even realized I had lost it and incredibly I had parked in the same spot. Unfortunately, there was only one.

I ended up with a 30gr surplus?!  Not fair! I'll do a more detailed yearly comparison later. I've got work to do.