I was really on a roll over Christmas, finishing up things and creating new things. The kids were in school until just before Christmas, so we had pretty much TWO weeks after Christmas to relax. Lots of knitting time!

I had worked on the two "Work Socks" hats and thought a scarf would be cool. I decided to use up the grey worsted weight yarn I had tried to use for the messy bun version of the hat. I set up for a 2x2 rib. For white, I grabbed some Impeccable and for the red...I saw this red sequined yarn in my stash! Adorable. I was going to do only two rows of red but changed it to four. However, I wish there were more sequins showing. I used up every bit of the grey I had. I've had it a long time, it was a Sears yarn. Really. Back in the old days, Sears had it's own yarn! 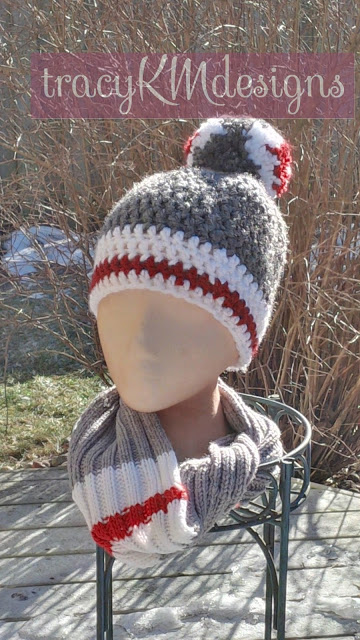 It doesn't match the hat exactly, but that's okay. Not every one want to be matchy-matchy. They're available separately. 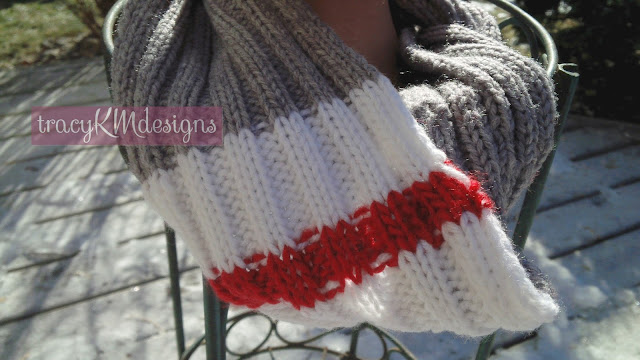 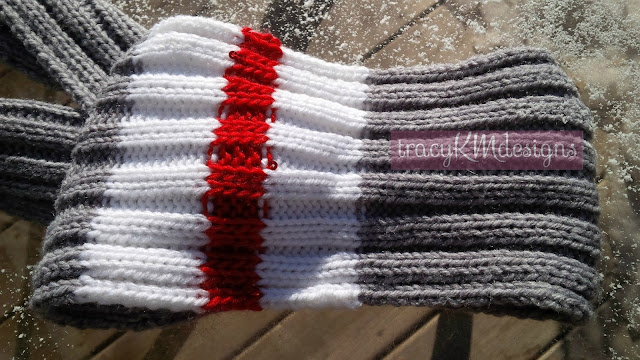 My husband and I had a movie night in for my birthday (we watched The Hangover. It's all I had recorded that he wanted to see. We hadn't seen it and he thought it was awesome. I somewhat agree LOL). I was having a hard time grafting the ends of the scarf. I knew how to do it but I had that problem with the offset. I gave up and just started grafting. Then, 3/4 of the way across, suddenly, one of the knit columns of 2 sts lined up. I didn't know how I did it, but since it could obviously be done, I had to start over. And over. And over. In the end, one side looks pretty good but the other side has a few blips. Steamed it because there was a bit of edge roll, even with the ribbing.