We  were expecting a cold snap (uh, it was February, it's supposed to be cold) and I knew I couldn't knit up mittens in time, so I opted to sew some mittens. I have a huge sweater stash I'm thinking of parting with. I haven't had the best results sewing sweater mittens and I just don't like them as much as knitted mittens, so maybe someone else should have the stash. But sometimes there are things I might want to make that aren't mittens. I really want to try making slippers. I know I can't make back what I bought all the sweaters for, but they're not generating money just sitting there either.

These are for the kindie kids I supervise. The knitted mittens I've made have been on the smaller size and there's quite a few bigger kids. These look big to me, but apparently they're not (maybe a smidge long). The striped ones (a Gap sweater) are more popular than the other ones (a felted woven--I think--scarf.  They are a little stiff). I wanted gender neutral. 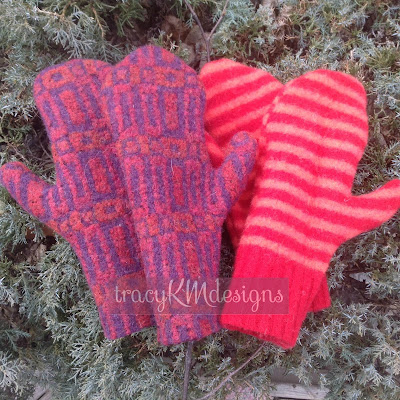 Not much else to say. My husband was able to fix my camera, saving me probably a large amount of cash, so I'm back in the game--though not much to show. It's been rather slow here. In fact, I finished the knitting part of something and I was heading to the rink, and realized I had nothing to take with me! I was going to just grab some more wool and make some more mittens, but I opted for a camo Baby Surprise Jacket. Why not. I have one in my "In Stock" box, so now I'll have two.
Posted by TracyKM at 7:20 AM