I wrote earlier about the process of making the skating skirt for Megan. Not the quick sew it could have been, and this dress is similar....though partially for different reasons.

The whole first part of that post, about buying and printing the patterns holds true for this one too (This is Jalie 2684 Mock Neck Dress), so I won't discuss those issues again.

I also wrote in that last post about the fabric offer I received from https://fabric-online.com/.  Megan decided on a red velvet! So exciting! It came and we petted it! I realized though that there was no vertical stretch. Oh no! Will it still work? How?

I consulted with other costume sewists in a great Facebook group called "Spandex Doesn't Scare Me". It was suggested to use the velvet "sideways", with the stretch going vertical instead of horizontal. Another suggestion was to add a bit of extra length. That's what I went with. I also figured the stretch mesh on the upper chest would give some stretch, and I decided to make the panties with some cotton-lycra. After going through my stash, I actually decided on a slinky knit. I figured it would help ensure the skirt doesn't stick to it. I also wanted to make a shelf bra. 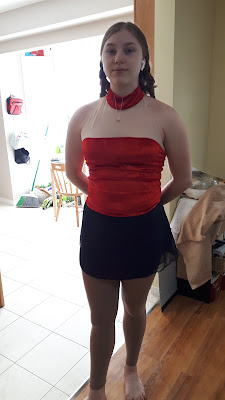 It all went together pretty well. At the sides of the beige mesh, I used clear elastic. By now, everything was shut down and I couldn't just browse the fabric store for options but I really thought the clear elastic would be a good option. I think it worked okay. However, once it all got put together, I had her try it on before stitching the back of the collar down. The beige mesh (which was wonderfully donated by the woman who owns the sewing studio that does the classes I've attended! I had put out a plea in her local sewing group on FB because the stores were closed, and I really didn't want to order 1/2 meter of mesh online!) section was not laying right. It seemed to be too long. So I had to re-work it. I'm not 100% sure it's "perfect" but Megan is happy. 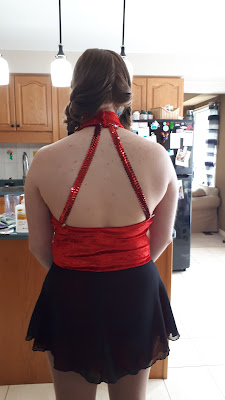 The chiffon! I tried to be extra careful when I cut it. When I went to sew it together, I could see the pieces didn't match! One edge of both the front and back of one of the colours was too long. I carefully trimmed them, deciding one layer would be slightly longer than the other. You know, for that little extra bit of uniqueness! I sewed it on and let the dress hang for awhile before hemming. It didn't grow anymore, so I must be getting better.

Megan decided she did want back straps after all. I kind of forgot that. I went to gather the materials to make the straps and this sequined stretchy trim fell off the bookshelf! No way. Fate.

I'll get into more details later, I just wanted to get this up because it is basically done. We are waiting for some crystals to arrive because she really wants to "stone" it. I like it as is. Her music is from Sweet Charity, and in this scene, the dancers are in all black. The lead dancer in wearing a square straped halter and  I wanted to add straps to mimic that, but she said no. The dresses in the scene are not blingy at all, but she figures no one will know where the music is from anyway.

We got the news late last week that figure skating can start up again, May 19 (but not hockey or lacrosse!). However, the town facility where she practices is closed till May 31, so we still have to wait. We don't know if the facility will open on June 1; the town has cancelled everything through June, and July 1 (Canada Day) festivities.