In November, 2014, my daughter wanted a new scarf, so we made a fair isle one on the Singer 327.  I steamed it, and blocked it, but the curl never subsided.  I was quite surprised, but I guess, since it was a sock yarn, that would actually have been a good thing.

So, it never got worn past the first day.  I always thought I'd get around to making a backing, somehow, for it.  With all the work in my basement though, the Singer 327 has not been used much, until this fall.  Finally, I decided the day had come. I picked up a ball of Loops & Thread "Woolike" since I was pretty sure there wasn't enough of the Kroy white.  I wasn't sure, while I was in the store, if the white was right.  As it turns out, I should have gotten something a bit softer.  Oh well.

I was hoping to do a "sew as you go" and attach the sides of the scarf to the sides of the backing as I went along.  However, I wanted the new backing to have a knit side out to counteract the curling of the scarf (it curls to the purl side, so if I put two pieces together, one wrong side to one right side, it would still curl).  I couldn't wrap my head around this, as when you're knitting, the purl side is what faces you.  I decided I would just sew it together after. 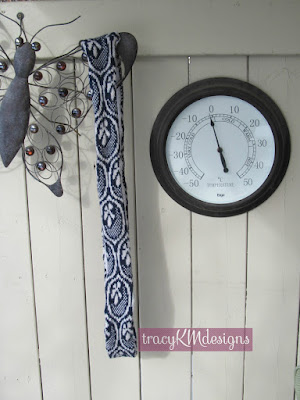 We started one "swatch" and I decided it was too wide, and Megan lost interest, so I carried on without her.  I used Card 3.  I was hoping the tuck pattern would have less curl.  The knit side has a bit of texture.  I made it an inch longer than I thought I'd need---once I started sewing though it wasn't long enough! 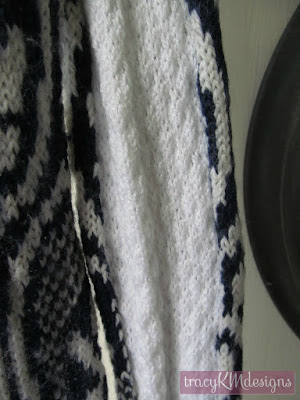 I didn't want to mattress stitch it so I used my machine and a zig zag.  Not the greatest job.  A walking foot would have helped.  And, the knit side still rolled in.  I could have made the backing one repeat wider, or I could block it harder and top stitch, but I was done.  The back is quite bright compared to the pattern, but I don't care.  It's done, I wore it in public, and no one laughed :)