I was struggling with Christmas gift ideas this year.  My budget was really tiny.  So tiny, well, it might as well have been non-existent.  So that means things knitted from the stash.  But what?  People can be picky.  Or, I should clarify.  I needed to make things for teenagers.  Teens can be picky.  Yup. 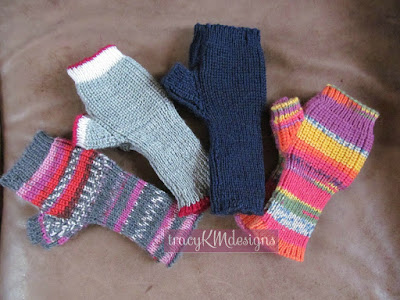 After making the trial pairs of the fisherman's rib fingerless gloves, I figured they be good little gifts.  If I found some extra money in the budget, I could tuck a bill or gift card into the gloves.

I don't recall which of the two left pairs came first.  The left one is from some old yarn...I'm a little surprised just how old!  For laughs, check out this post about the socks I made, and here's the post from when I bought the yarn. 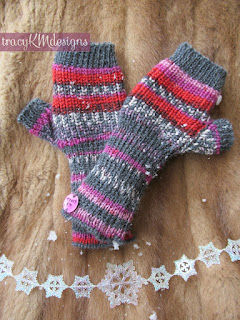 While this is certainly NOT the oldest yarn in my stash, I think it marinated long enough.  It is disappointing though to see how those socks looked after a few wearings.  On one hand, natural felting will make them warmer, and I love seeing knitted gifts used, but on the other hand, felting will reduce the natural ability of the rib to stretch, which is a key element of this design. 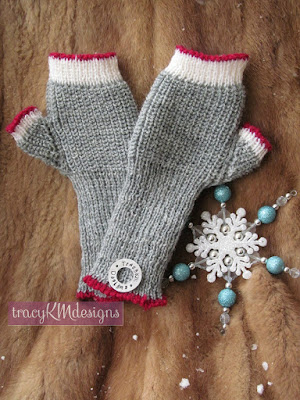 The first difference I did was to set it up with the edge stitches on the RB.  I made the gloves slightly bigger to do this, rather than slightly smaller.  This did allow for easier seaming, although, as you can see in the blue pair at the thumb gusset, the resulting column of knit stitches created by taking in 1/2 of each edge stitch, does not match the fishermen's rib. 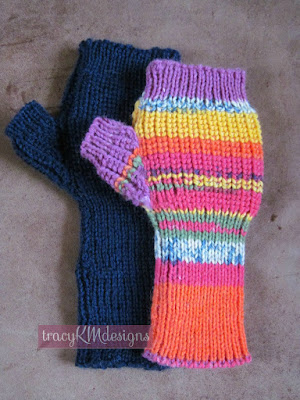 Issue?  I don't know.  Next time maybe I'll do an even number of stitches and seam it up with a purl column.  Megan did most of the knitting of the blue pair, I just set the machine up, casted on, changed the settings when she called me, and sewed them up.  Child labour is so handy! 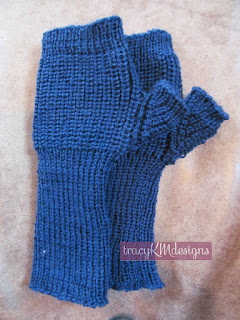 I also elongated the thumb gusset a bit by fiddling with the last couple decreases, so I ended with putting three sts on one needle, instead of 5.  I also started with two extra stitches (by having the edge stitches on the RB) so that automatically made it a bit longer.  As well, I used my two stitch transfer tool for the decreases, rather than moving the edge stitch.  That helped A LOT.  A LOT.  And looks nice too.  I did experiment with the grey pair of trying to increase on the sides of the hand to make the thumb gusset that way, but it made a mess.  I might try again, but keep the thumb in stockinette.  But you'd end up with a seam up the middle of the outside of the thumb.  My next trial will be to do the thumb first, then "seam as you go" although I'll probably get the thumb inside out.  I've never done it with the RB in use.


All these totals are in that year end recap.  I did T6 for all three, 40 rows for the cuff, 48 for the hand.  They feel very cushy, stretchier than the orange/purple, but not too 'thin'. This is surprising, because the blue yarn, and the grey/white (it's really a soft, creamy white) are Kroy 3 ply, which is thinner than the orange/purple Kroy Socks.  So, this pattern is quite forgiving of the tension, but I think that if you're using a Singer, just start with T6.  The orange/purple ones could even been T6*.