Off To a Good Start

Last year I said I was going to keep track of how much I donated/received by donation in a separate category.  But I forgot about about that, as I really didn't receive any this past year.  I'll have to go back and see if I gave any away.

This past weekend, Rob was working in my studio space and having to move things around (everything got moved from the other room into my space, and then I had to move things--but couldn't put anything back in the other room because he needed the floor for cutting drywall).  He picked up a garbage bag with some yarn and said "get rid of it!".  I had been trying/planning to, but it just hadn't happened.  That night, there was a post on Freecycle by a lady looking for yarn.  Well, that was my sign!  Often people are just starting and looking for balls of "normal" yarn (Red Heart, Vanna's Choice, etc).  I described the yarn and she said that was great.  So off it went! 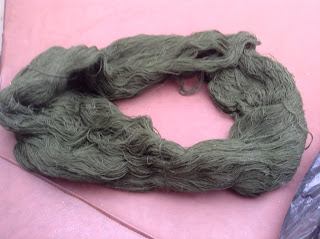 424gr of this green yarn.  I thought it might be wool, but a burn test after I bought it was inconclusive, I think.  It's sort of sticky, 1ply, and a very large skein.  I lost interest about 10 minutes after I brought it home (Value Village?). 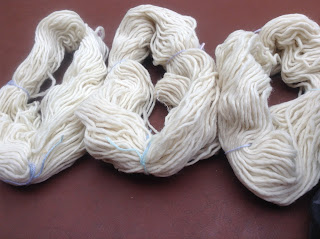 I picked up this 275gr of bulky 1ply because I thought it might be wool and would be good for dyeing and felting.  Again, I think the burn test was inconclusive.