About 20 years ago, I made my boyfriend a fancy long stocking cap.  I'm not sure exactly when I made it, but it appears in a photo from Feb 1997.  I think I gave it to him for Christmas 1996.

I was still pretty new at knitting.  I had learned as a child, but never successfully made anything until fall/winter 93/94.  More about this hat can be seen in an earlier Timeless Tuesday post. On one hand, I'm quite proud of this hat.  On the other hand...oy!  It was a long time ago! 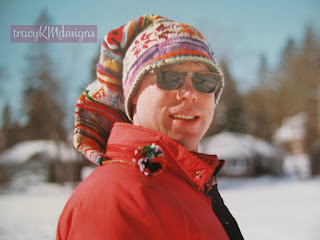 A couple of winters ago, I washed a bunch of our winter stuff.  I had washed it before, but I think this time we were in this house with a different washing machine....and it ate, shrank, and destroyed a lot of items!  The hat and mitts in my profile picture?  Felted.  A favourite hat of Hugh's from when he was little?  Pompoms gone!  And this hat?  The machine destroyed the pompom! 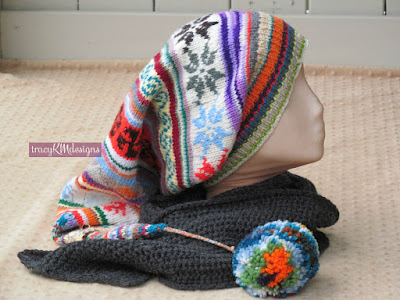 I always planned to redo the pompom.  The hat got moved around and moved around and just wasn't on my radar, especially once I started knitting for hire.  Finally, this Christmas, I decided to make a new pompom.  This time, I even got to add some reflective yarn!  Wish I had used more! 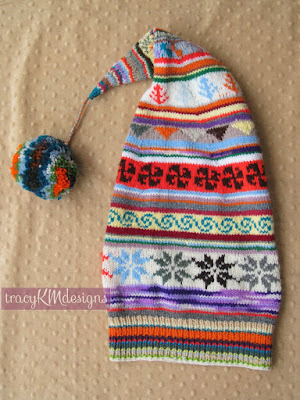 I included the pompom weight in my yarn totals just before the year ended, so I can't claim it today.  I think it was 60gr.  It's BIG!  Rob says it's a little heavy now LOL.  He's loving having it back, but the kids are not thrilled to be seen with him when he wears it!
Posted by TracyKM at 10:40 AM