Easter isn't a huge thing in our house, and this year was even more low key than usual.  The Easter Bunny was on a very tight budget.  I did see this pattern though and thought they'd be cute to make for my kids.  It hides an Easter cream egg inside. 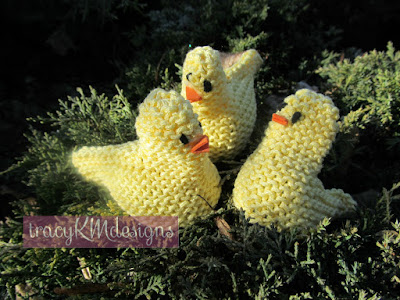 The first one I made as written.  The second one I decided to do the head in the round, purling one row, knitting one row.  The third one, I did it all in the round.  This one came out smaller, and the increase sort of spiralled up from the bottom of the tail upwards and towards the back.  I had kept it at the end of the row but totally forgot that perhaps I should move the end of the row back to it's original spot, or halfway, I don't recall now.  The head was not as nicely shaped either, because obviously my purl rows must be shorter than my knit rows.  Just knit this pattern as written :) 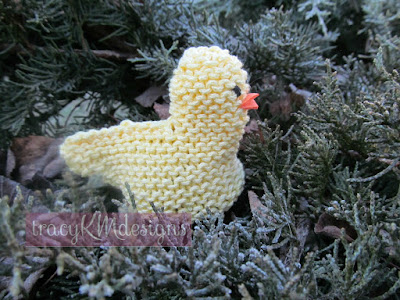 The eyes are all a little funky and uneven.  It was late.  The kids were staying up too late and by the time they went to bed I was ready too.  The beaks are made from some fun foam that we just happened to have in the craft bins.

I used ....Sirdar Cotton DK? My ball doesn't look like that but it's also old.  It was a DK cotton, mercerized.  A 50gr ball, some had already been used for something, and I had a sizeable amount left.  I think these weighed a total of 30gr.  If I find where I wrote it down, I'll update.