Mistakes are Not Always Design Features

Often in knitting, you'll hear "Oh, it's not a mistake, it's a design element".  Once is a mistake, twice is a feature, thrice is purposeful.  Well, I made a mistake on this shawl, and didn't notice it till 27 rows later.  It is clearly a mistake, even if most people I showed it to could not find it right away. 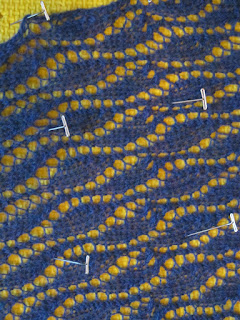 It was hard getting a good picture.  Running vertically, just to the left of the right pins, there are extra eyelets in the tips of the motifs. 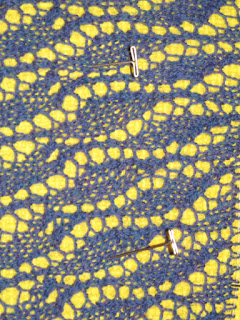 Close up, they do sort of blend in with all the other million eyelets, but they break up the tips of the motifs. 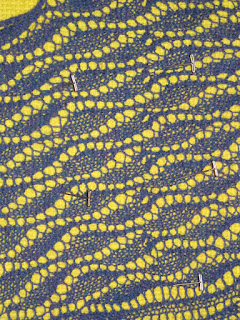 This picture shows it pretty well.

Of course, this is not a simple repeating pattern with clearly defined stitch repeats (chevrons or feather and fan type patterns).  Dropping down the offending stitch and reknitting it 27 rows....in this pattern, I wouldn't even do it if it was just ONE extra eyelet, and I think I did it 8 times.  What I don't understand, is how it didn't affect the next right side row!

The only way to fix this was to rip out the rows.  I thought maybe I could take a thin needle through a row just above it and then tink the last few rows, but the pattern undulates too much.  I kept it pinned down, and ripped the rows back, counting each row as I went.  I ripped 27 rows.  Then, I had to figure where this put me on the charts, since there are two charts, and one is 40 rows, and one (the section with the errors) is only 20 rows.  There is 4 rows in the 40 row chart that serve well as "landmarks" because two of them have a M1 at one end of the section, and two rows have it at the other end of the section.  In a sea of YOs, K2tog, SSK, SSP2O and K3tog, a M1 stands out.

I got it back on track, and I'm keeping care track of which row I'm on this time (you repeat the shorter chart something like 5 times, and the longer chart, it doesn't say how many times!).  It seems I've barely used any of the yarn (KnitPicks "Shadow", I think), but now I'm in the "even width" section so I'll just keep going on these charts for quite a while.  I wish I had made it one chart repeat wider, and actually, after ripping out the 27 rows, I would have had to rip out only about 20 more rows to get back to those charts...oh well!
Posted by TracyKM at 6:45 AM