Still a Long Way to Go!

While I was working on some sewing on a Friday evening, my daughter Megan (the one who wanted to learn to sew and make that tote bag from a couple posts ago), had a great idea.  "She" could make something to give her synchro coach at the party....tomorrow.  "But Megan," I said, "You really have three coaches".  No problem!  We decided on a small zippered bag, using some skating fabric I have in the stash.  I sent Megan off to bed and I worked out a pattern template.

I first looked at a top zippered pouch, which is most common.  I looked at ikatbag's tutorial but she doesn't give full instructions for attaching the zipper because "by now you can probably do that in your sleep."  Well, I've done it, but they've been few and far between.  And I struggled.  So I looked some more at her zipper tutorials, thinking that starting closer to the first one might be good for both Megan and I.  I skipped the first two and went with a flat bag with zipper on top.  I had done this once before with a different tutorial (I made a little bag for Lucy's EpiPen, but I can't seem to find a post!).  I struggled a bit that time, but I was sure with ikatbag's tutorial I should be fine.

She doesn't give templates for these tutorials.  I thought that would be okay because so often I'm making something a different size from a tutorial and I don't understand how the dimensions given sometimes relate to what I'm doing.  I drafted out a shape that I thought was nice, a square with rounded corners, but not too rounded so they wouldn't be too hard to sew.  Megan picked an inside fabric, and I had three matching zippers that while not perfect, would do, though I thought maybe we'd go and pick out better ones in the morning. 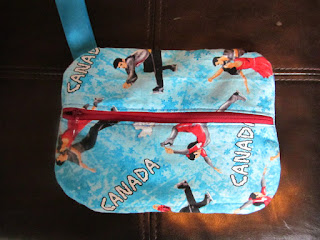 Morning came, and Megan wasn't getting up, so I went ahead with cutting.  And then the next few steps since I had never sewn tabs over the ends of the zippers.  Here's where some measurements would have helped.  My zippers were long enough without tabs over the ends, but I wanted to do that this time since I hadn't ever before.  I had no idea how long to make the tabs, she just says "at least as wide as the zipper".  And, how to ensure that both ends ended up the same size once sewn in.  I didn't want to make the tabs too long, but in the end they were too short.  I had to use a really tiny seam allowance, and trimmed the zipper back, but they still ended up sticking into the seam allowance of the sides of the back, making the bags pouff up and not lay flat.  The other thing I didn't take into account was how much of the front pieces get taking up with the zipper.  When I divided the top piece for the zipper, I added seam allowances to both pieces.  It didn't need a full 1/2 inch but I don't know exactly what it did need.  My zippers seemed a little narrow. 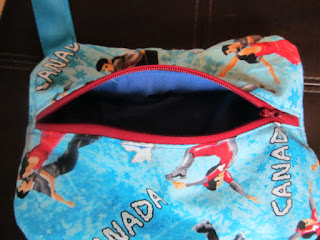 In the end, really the only part Megan did was sewing the straight parts of the outer bags.  The curves were too tricky for her, and we were running out of time.  I added blue satin ribbons for loops.  I was pleased at myself for remembering to add them and in the right direction. 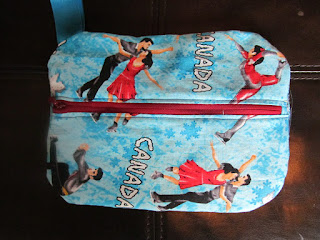 One other small detail.  I wasn't really paying attention to the fabric direction when I was cutting, I just wanted to make sure there was a full "Canada" on one of the top pieces. After, I noticed that this bag, well...I know I wasn't trying to align the fabric, but it's one of those situations where it's close, but not close enough and not far enough to look unintentional. Know what I mean?  The first picture, that bag wasn't bad, and I don't remember the second bag, but this one is a little embarrassing!

The coaches really seemed to like them and thought maybe for next year's teams it'd be fun to have their make up use the same fabric as the costumes.  Usually those fabrics are not the greatest to sew with when it comes to things like zippers, but I figure I could do the inners in a woven. I'd think they'd just get the seamstress that does the costumes to do them, but that's okay, one way or another.

I wish there was a way to measure how much fabric is leaving my stash! I've still got two other sewing projects to show off!
Posted by TracyKM at 10:20 AM