Our wonderful school has a "Spring Fling" every June.  The highlight, for me, is always the raffle table.  For $5, you get 20 tickets.  There are usually baskets put together by classes, and LOTS of miscellaneous items--the types of things you re-gift to a raffle.  But awesome stuff that other people would love.  I've even put things in, like the year I did the red and white basket with my water bottle holders and a few other items. These past two years, I haven't won anything (but I make up for it at other contests!), but in the past I've gotten a lot of great stuff that I've been able to gift to others!  This year though, every class did a theme basket and there were only a few other items.  I'm not sure why, though last year (or maybe the year before?), they had a LOT of items, and then right at the start of the fling, it started to pour rain so it all had to be moved inside quickly.  And, well, last year, there was a group of moms from the parent committee who had been involved for a long, long time and their kids all graduated.  Anyway.

My older daughter's class got "Baking".  What could I contribute?  What could I create?  What could TracyKM Designs create?  I thought about an apron.  A bit boring, but necessary.  Then, I remembered I had a couple "Snowbird" patches I had bought from the previous conductor of our community band, who is involved with Air Cadets, and one squadron is called the Snowbirds--named after the Canadian Air Force Snowbirds, an acrobatic team.  Our school is named after one Snowbird member from our town who was killed in a crash.  I knew him in high school, and am so proud my kids go to "his" school.  I found a large piece of plain white twill (what the heck did I plan to do with 2m of white twill?!).  I even found some adequately sized red bias tape.  I have a scary looking old apron that is just a piece of twill with bias tape for the straps and tie.  I copied the shape onto the twill, cut, hemmed the sides and bottom and put the bias tape on.

Wow.  Pretty darn quick!  I had to stop myself from making one for myself! 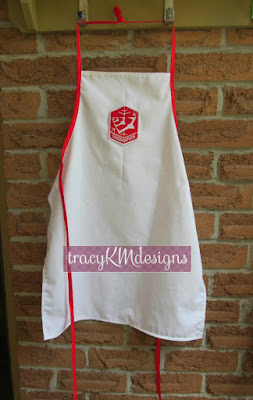 I sewed the patch on, and it was ready to go!

I was disappointed at the fling, when I saw the basket, it was folded in such a way you couldn't see the patch.  Oh well.  The winner ended up standing next to me, so I let her know.

I can totally see making more of these aprons.  I have one more patch, I think, but now I know an embroider who happens to live across the field from the school and her oldest is starting JK in the fall, so I'm sure she'll be motivated to get the image digitized!!
Posted by TracyKM at 1:11 PM