We were heading out for a day, and there was a 45 minute drive, so I needed something easy to work on.  Keeping with the vintage feel of the Baby Surprise Jacket, I thought I'd whip up another "5 Hour Sweater".  Looking at the pattern though, it didn't really work with my  yarn, so I went with "Quick Baby Sweater" by Lorriane Major.  This is an oldie but goodie that I've done before.  The date on my print out is February 19, 2002.  Just days before I would have found out I was pregnant with Lucy!  On the back of the pattern is a doodle, by Rob, of how he pictured the awkward corner in our basement that he was renovating at that time.  I've made this sweater before and remember having a few issues with keeping track of right side/wrong side, and that happened again.  I also used smaller needles, I think 6mm with worsted weight yarn (on the smaller side of today's worsted).  I think the 6.5mm makes it just a little too loosey-goosey.  I've used this yarn for lots of other baby items, and I think I still have some left!! 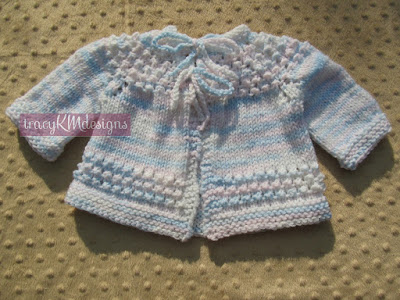 I really don't have much to say, except the pink doesn't show up too well in the picture.  I made the seamless version.  There's no instructions for button holes, so I crocheted two ties (4 chains) and made bows.  This will go in the "In Stock" box as apparently my extended family is popping out boys only.

According to the first post written about this yarn, I had 70gr left.  Yet this one took 89gr, and there's the cat Lucy made, which took 20gr.  This truly is one of those never ending balls of yarn!!