Yes, I'm still knitting!  While letting the wrist heal, I was doing a lot more sewing, but I still snuck in short blocks of knitting--can't really take the sewing machine in the truck!  I had the urge to get back to basics and do some baby items (and then found out there are babies coming in the family!  Since then though, they found out they're having boys).  First up, a Baby Surprise Jacket! 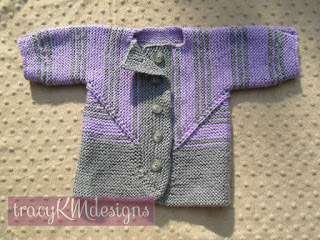 Not much to say.  I started with no plan, except to use up the purple.  Which I did--had barely a few yards left over.  I stuck with the pattern, but did my decreases and increases so they'd be more decorative. 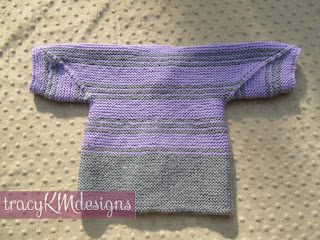 I ran out of the purple earlier than I thought I would.  If I had realized, then I would have done more grey sooner, or did a waste yarn cast on--which makes for nicer sewing up too.  I think the purple was "Vanna's Choice" or "Impeccable".  The grey I think was left over from the Rude Robot hat and the purple from the mermaid blankets.  All together, it weighs in at 184gr, and I used either 5mm or 5.5mm needles.  I have a bit of purple fabric from that first hobo bag  and I might make a little pair of baby shoes.  Trouble is, figuring what size to make.  I think this is about a size six months-12months, but most baby shoe patterns only come in newborn.

I even created a little slideshow to explain how to fold this sweater.  I know, there are other videos and tutorials out there, but I can't resist.