It's been a busy year for Christmas stockings!  And I'm not done.  I was asked to make these two, which are Mary Maxim designs. However, the client specified, explicitly, that they were to be knit looser than the tension given in the pattern (which she had) so they would be bigger and very stretchy--to fit lots of goodies in!

I started the top of the first one....in the round. I even knit the first row or two of the picture in the round, then casted on one stitch on either side of what would become the seam, and started working flat. Then I decreased those two stitches once I finished the picture and went back to in the round knitting. This did change my gauge a bit, and I had to be conscious of knitting loosely in the area between the picture and the heel. 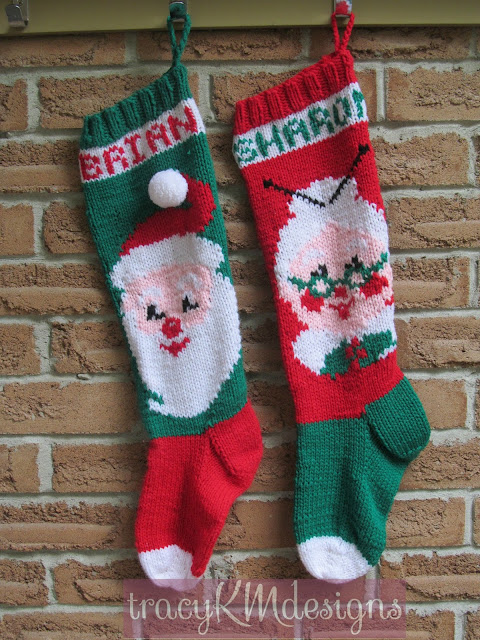 On BOTH stockings, I knit the heel and turned the short rows...and then realized I was supposed to change colours!

I wasn't sure about Ms Claus. The black eyes, sitting above the glasses.  But once done, washed and blocked, and hung to be admired at a distance, I saw that it works.  The stockings actually got two baths because they took too long to dry the first time.  This extra time through the wash/dryer got them really soft (Loops & Thread "Impeccable") and really fluffed up the pompom.  The pompom was made using the second largest rings of the plastic ring pompom maker.  No middle ring (one got lost long ago). It was perfect. The key with the plastic ring is to totally fill it.

The great thing was I needed to buy just a ball of white to make these.  Even the bright green was in my stash! So, the 209gr made--a bit--of difference to my totals LOL. I also weighed all the ends from various projects I've been working on, and that all came to 20gr.  Every little bit, right?