Let There Be Light!

Okay, this hat isn't self-lighting, but it looks that way when the light hits it!

It was totally NOT the hat I intended to make.  I started on Boxing Day with some cool multi-coloured yarn (in the Earth Mix), and I had first wanted to add reflective orange stripes--but the orange in the yarn is not as bright.  I don't have a brown reflective yarn, and the black was a little harsh, so I thought the dark grey reflective would work.  The cuff started off with the plain brown part, and I did two rows, then two rows grey, two rows brown, two rows grey, two rows brown...two rows grey...two rows brown...and I got really bored of the brown!  How long was it going to go for?!  So I ripped back to the top of the ribbing and found the next colour in the yarn.  Here, I discovered that it's not a gradual change...they cut one yarn and overlap the next pattern, and sew the ends together!  Huh?!  I got a little creative with doing 2 rows of the coloured (I mean: 2 Boston, 2 Reflective, 2 Boston, 2 Reflective) and then changing to a different section of the Boston Mix.
But the kids hated it.  They don't often hate something I make.  They might not like it, but don't care.  But while Grandpa is not a slave to fashion, they still thought it was ugly.

So, New Year's Eve I changed gears.  They wanted me to do bright orange with black reflective.  I thought that looked a little too Halloweenish.  He has a black and yellow John Deere jacket, so I went with that, though I didn't want to do the same 2 row stripes because it might look like a bee costume.

I cast on using the alternate cable cast on from Monste Stanley's book.  As I was doing the ribbing I was worried about the size, and that once stretched, it seemed rather open...not sure how to describe it.  So, I used larger needles and picked up all the knit stitches from the cast on row, then increased in each stitch on the first row, and made a stockinette band for the inside.  Then, at the top of the ribbing, I knit both bands together to join (if I had had some fleece material, I would have sewn a strip inside for more warmth, but by this time, we were on the road to my parents). 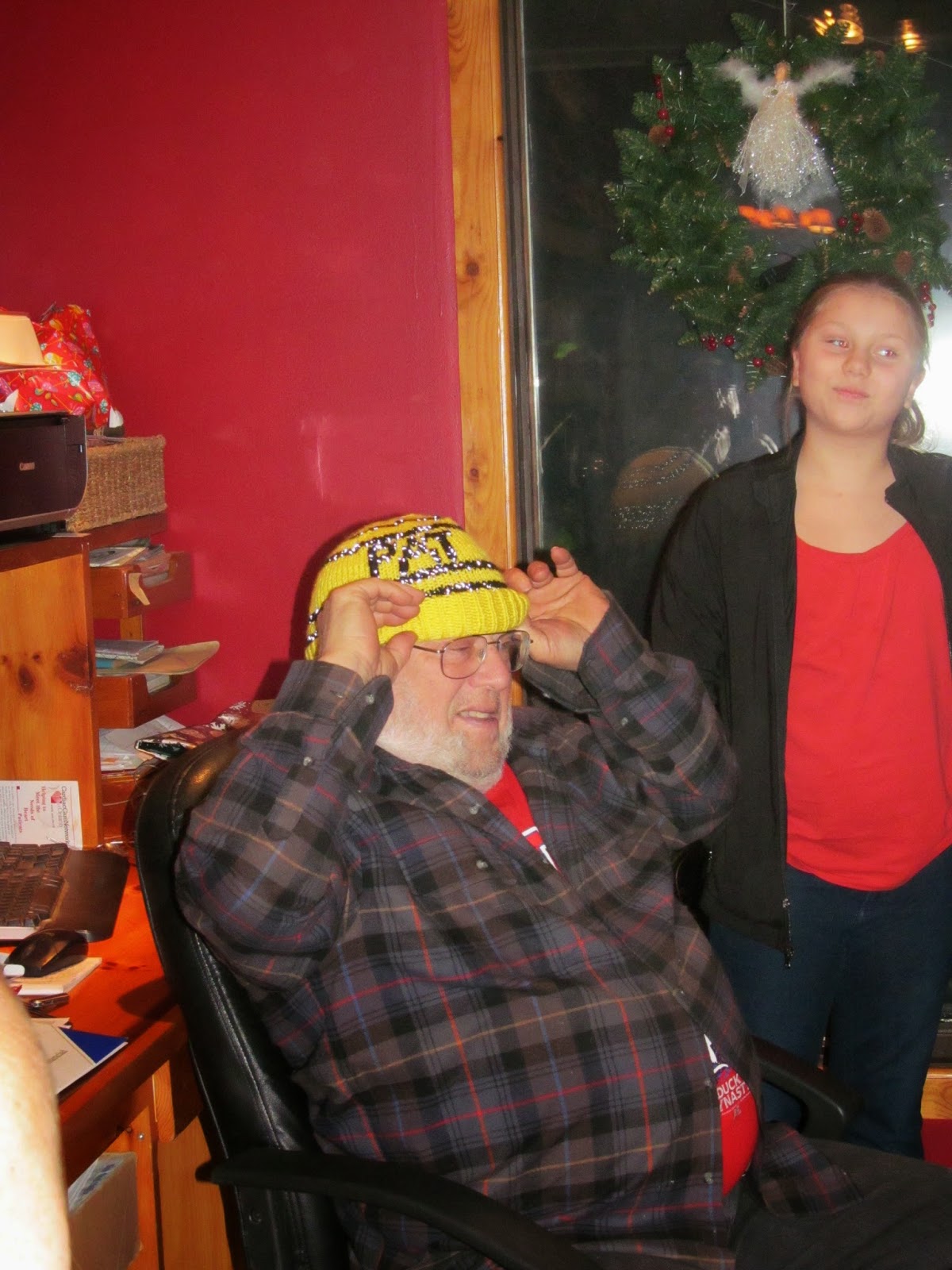 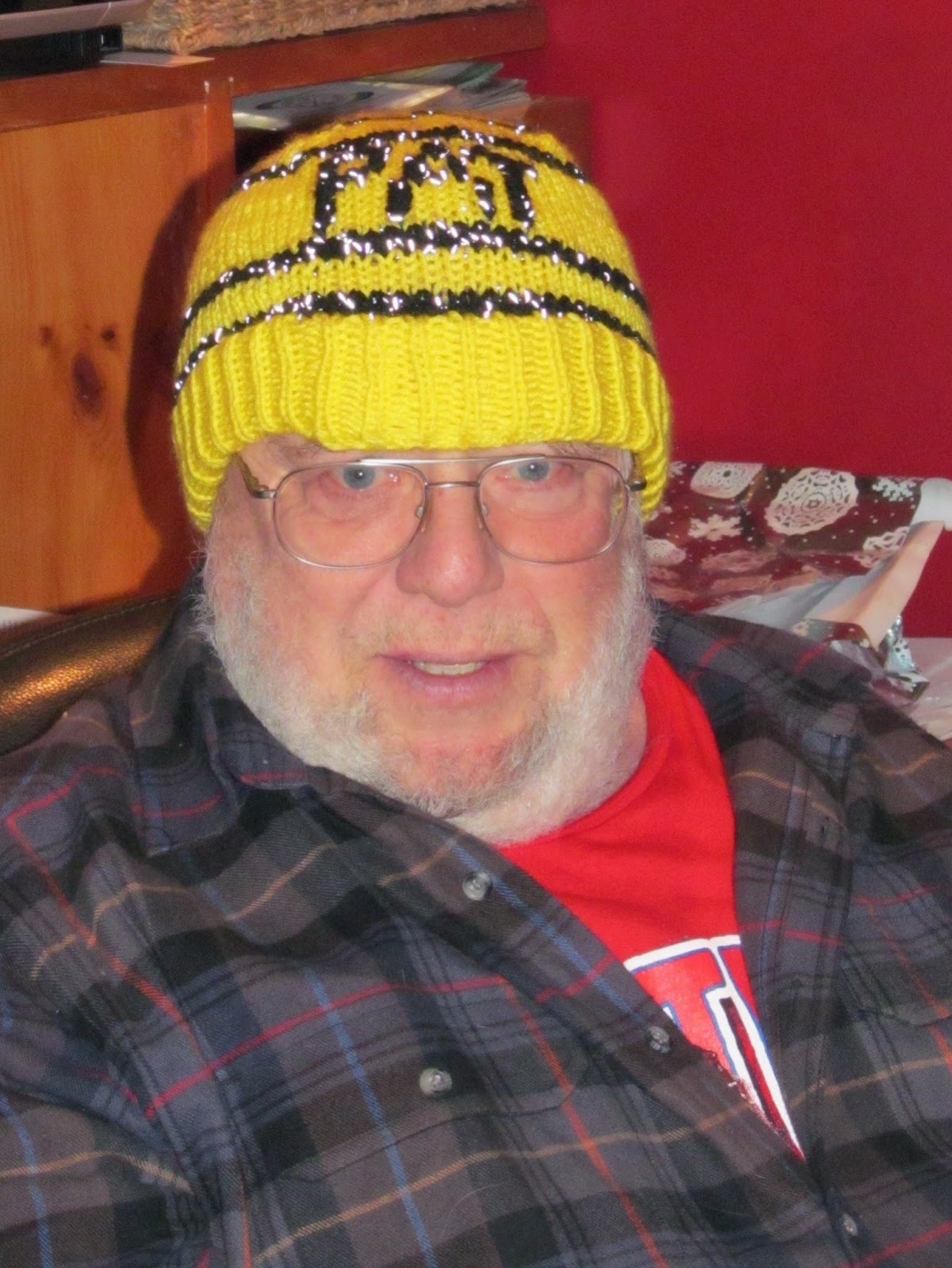 I finished it off and duplicate stitched his name during the Christmas/birthday party (I had been working on Toothless too).  Stuffed it in a bag and handed it over.  I had thought the cast on might not be stretchy enough so I was trying to loosen it off by drawing the long tail I had left, through the stitches.  It was tedious and if I set it down, it was hard to tell what direction to go it...it seemed two steps forward, one step back.  Might have been because of the alternate cable cast on.  I did maybe two inches worth.  But then the join was a bit wonky, and in my haste, I didn't pay attention when I started duplicate stitching his name, and somehow, ended up there :(

Do you think it needs a pom pom?