My pile of dishcloths is getting pretty ratty looking, so I decided to crochet up a couple (and yeah, I was procrastinating because I had 10" of ribbing, over 5 stitches, times two, to do). 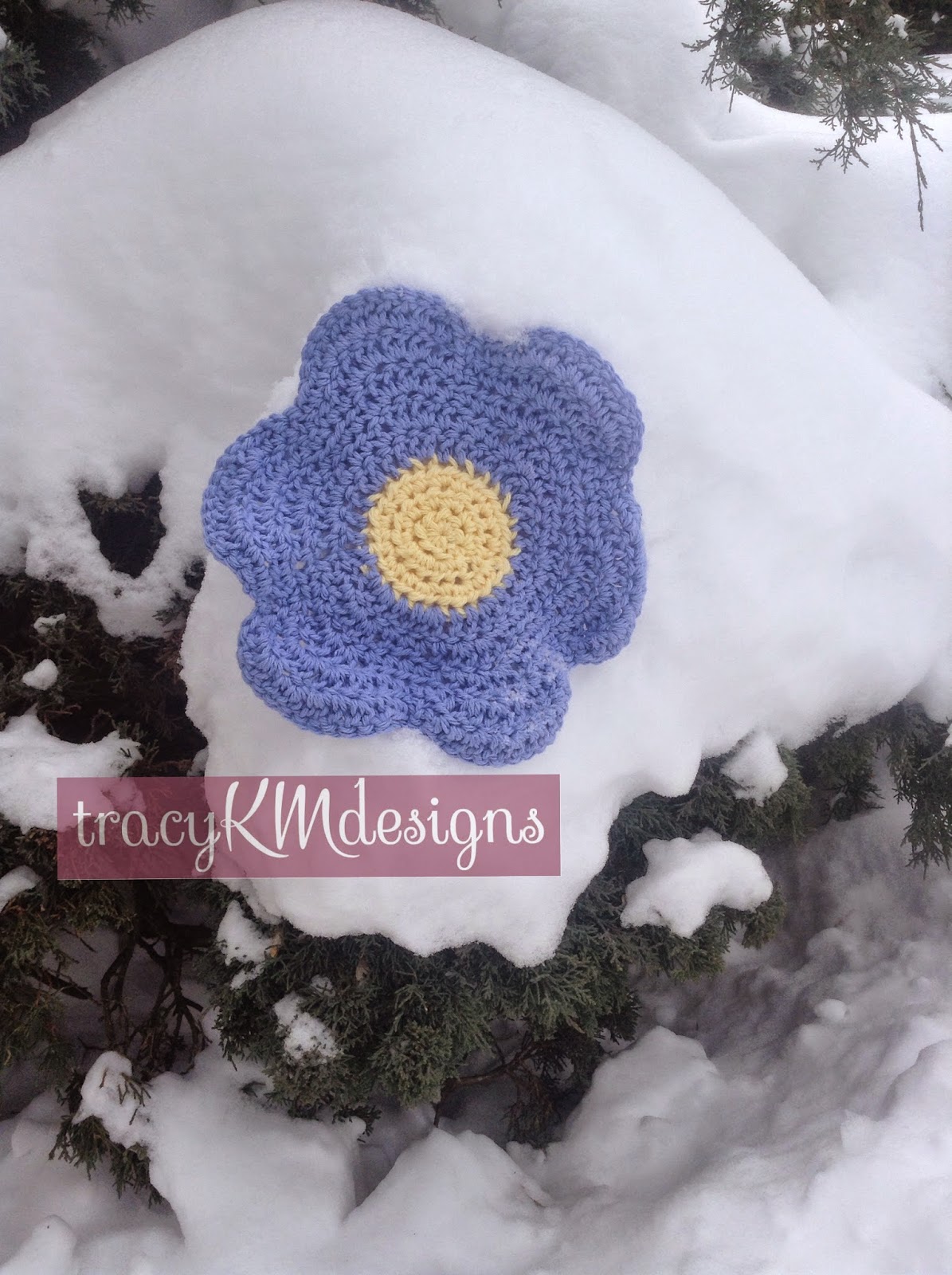 The first one is very reminiscent of Forget-Me-Knots, usually the first flower in my garden.  Except that usually my husband decides to weed the garden in late summer and pulls out all the first year plants because they don't have flowers, so they "must" be weeds.  It's a little big for my tastes, worked on a 5mm hook, it's 8 1/4" across the wide parts.  Weighs a mighty 23gr. 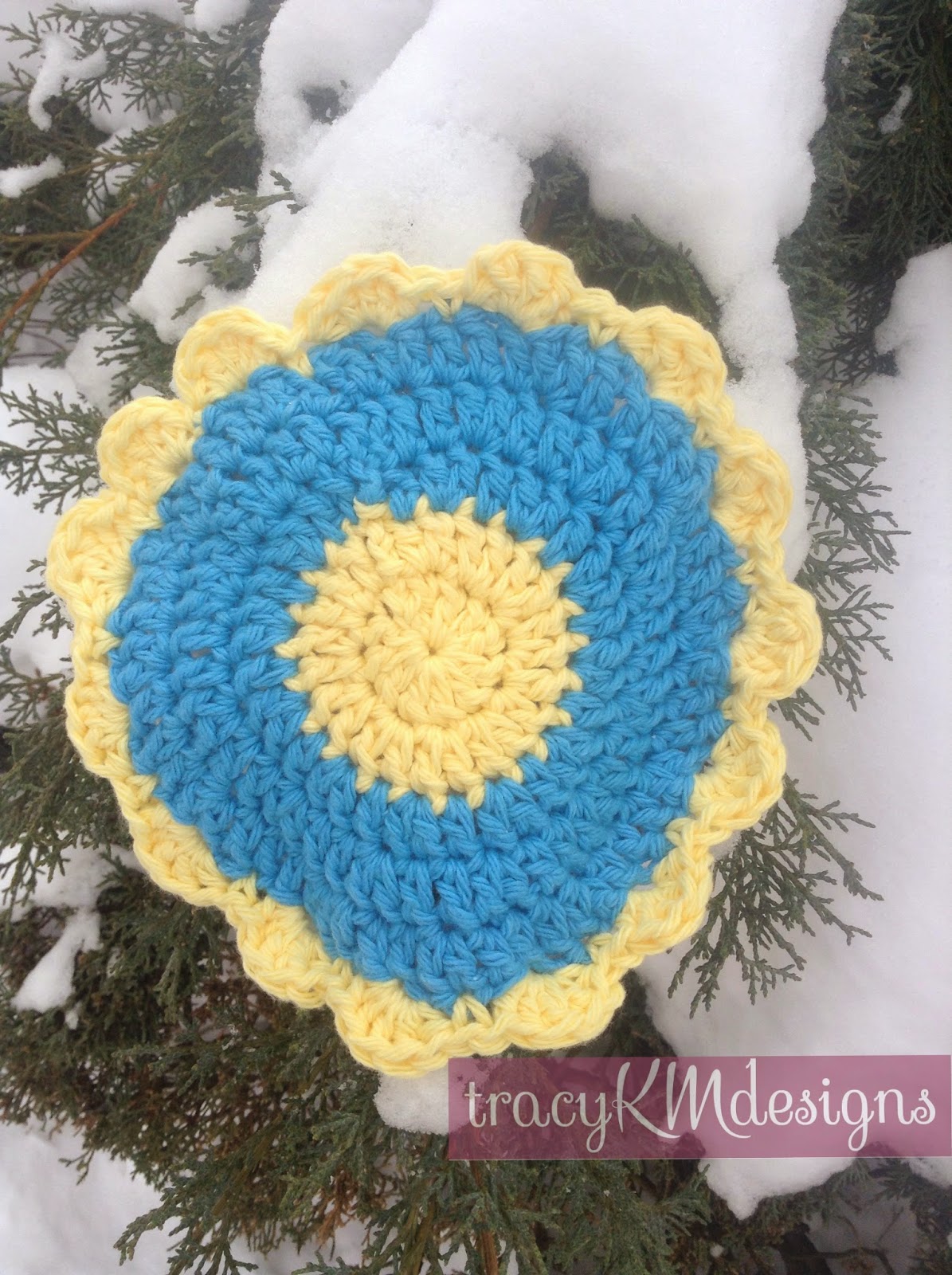 Then I started this one, decided I didn't want to be a slave to the flower pattern and just did a circle.  I didn't have enough of the bright blue to do another round, so I went with yellow and a simple scallop.  It's 6 1/2" across ( a smidge small?) and took a whopping 18gr.  Never going to get through my stash like this! 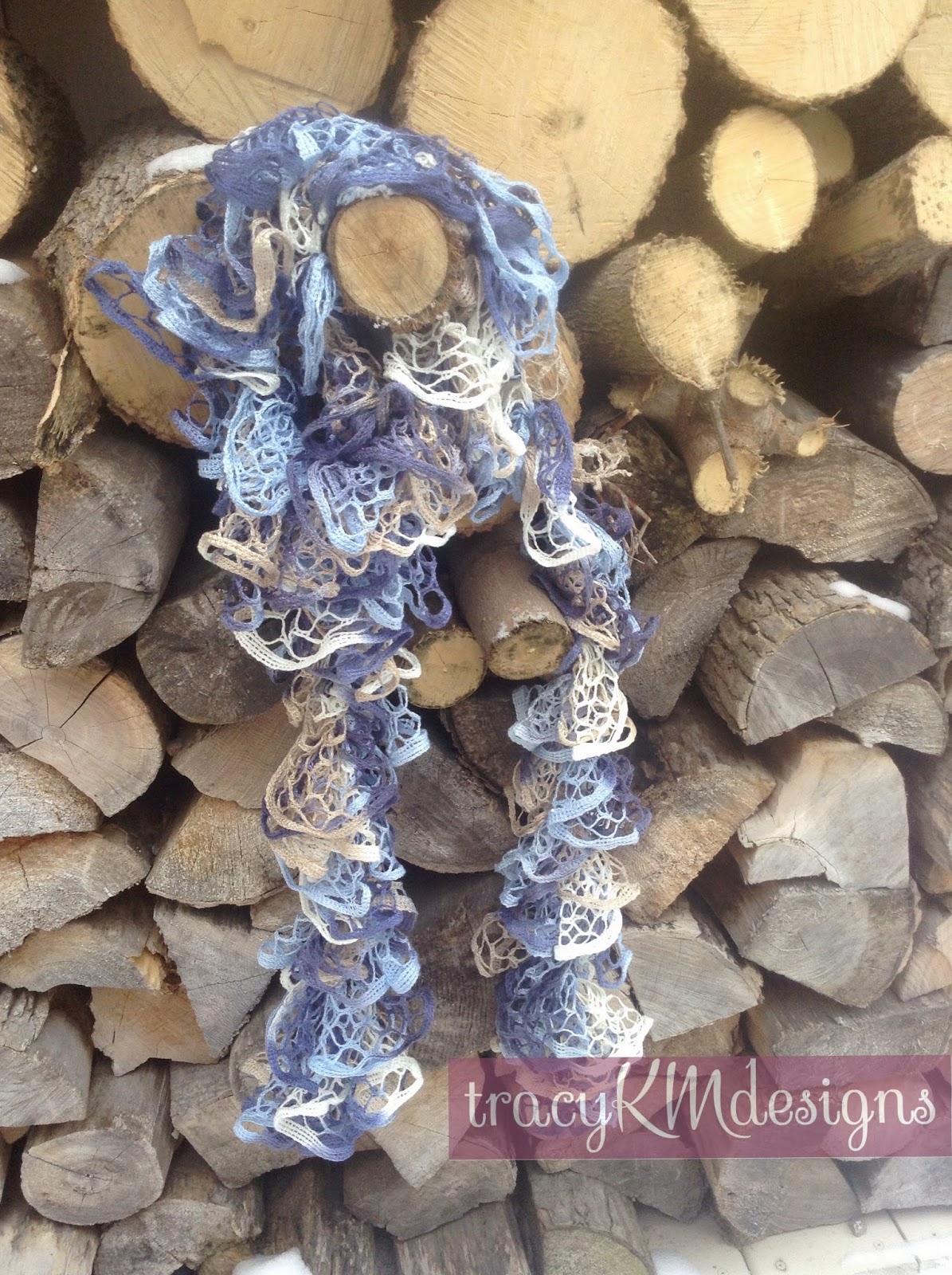 Just after I started that second dishcloth, I got an "urgent" request for  a ruffly scarf.  Someone had posted on Facebook, in a group, that they were looking for a ruffly scarf, who makes them...and a ton of people answered.  I don't actually know if the woman who contacted me was the one that asked the question, LOL.  I only had 4 made up, the ones I had done on the knitting machine.  The request was for royal blue, and I had this one, and a darker blue/teal/brown mix.  She picked this one, rather than waiting for me to go to the store.  It reminds me of the beach, and is so very similar to the colours of this shawl (that languishes on my work table still).
I started out following knitting instructions (this is Starbella, and there aren't any instructions on the label.  Well, it fools you into thinking there's instructions, but it only tells you how to cast on).  It was turning out unruffly, just layers of the "yarn", rather flat.  Sort of like an ascot.  The video didn't look like that, so maybe I gave up too soon.  I looked at crochet videos, and found four different ways to do it.  I took the easiest one and gave it a try.  One thing that bothers me with long scarves is that wrapping them around your neck gets bulky.  So, I usually try to create a thinner section.  This also allows the yarn to go further.  I did this with the machine knit ruffle scarves, but couldn't really figure a way to do it with this one.  Picking up every loop instead of every other loop seems to make it less frilly, but it was hard to tell.  This sucker weighs in at 101gr.
Oh, what to do with the ends?  Well, I did notice that the ribbon does unravel!  There is a little connector thread between each line of the trellis.  I pulled them out a bit, and each line got tied to the next.  For the thicker edge, I took out the middle connector thread, and tied the two groups of two together.  Then a little Fray Check.
Yarn In:  500grYarn Out: 23gr + 18gr + 101gr + 1282gr =1424gr Balance: 924gr more USED than boughtCosts:  $21.19/43days = $0.49/day