While I was in university, The Simpsons became very popular.  I couldn't understand why a big crowd of 19 year olds would gather in the main rec room at the university residence to watch a cartoon show.  Then my little brother started watching and I caught some episodes.  Some funny stuff for the adults too!  I was never a regular watcher, but can admit that I did enjoy the episodes I watched!  Then came "Futurama" by the same crew, and well, I never did get into that show.  There came a point where I just didn't watch much night time TV--just shows that I had recorded during the day because the kids had taken over our one TV, so I watched the recorded daytime shows in the evening.

Anyway.  A little while before Christmas, I posted an online ad on kijiji (similar to Craig's List), offering my custom knitting services.  Most of the requests weren't interested anymore once they got a quote.  However, Mathew (not his real name) was persistant, even offering more than my original quote when I said  I couldn't fit it in before Christmas.  I recommended a couple other WAHM crafters, but he replied back that he could wait until January.  What did he want?  He sent me a link to an etsy shop selling a "Rude Robot" pattern.  Basically, it was Bender, from Futurama.  Apparently, there is a woman he is quite fond of, that loved Futurama.

I've written before about the challenges with custom orders.  He sent a link to the pattern--great, that saves me a lot of time.  Would have save me more time if the pattern had included a gauge.  More on that tomorrow.  He had some specific requirements though.  It had to be very soft, and look like the picture, and be thick and warm....and then he added he wanted a quote embroidered on the back.  Whoa.  I've never done that before.  I couldn't do it by hand, I don't have a machine, I'd have to outsource.  How much would that cost?  Who?  How long?  My first thought was to embroider it on ribbon, and sew the ribbon on.  He wasn't thrilled with that idea.  I thought perhaps I could knit a ribbon in finer yarn, nice and tight, to be embroidered on.  It wouldn't show too much.  I just didn't know how embroidering on crocheted fabric would work---there's holes!

The pattern called for Red Heart.  Well, that's certainly not soft, and really, not all that thick or warm.  I shopped around a bit, thinking I might use LionBrand "Woolspun" like I had used on the wolf hoods, but it was thicker than the gauge of Red Heart, and I didn't want to fuss too much since I had an actual pattern.  I picked up three balls of Red Heart "Soft", which was definitely soft, and works to the same gauge as the basic Red Heart.  Mathew wanted to see samples/swatch, so I worked up some yarns for comparisons.  This was really interesting! 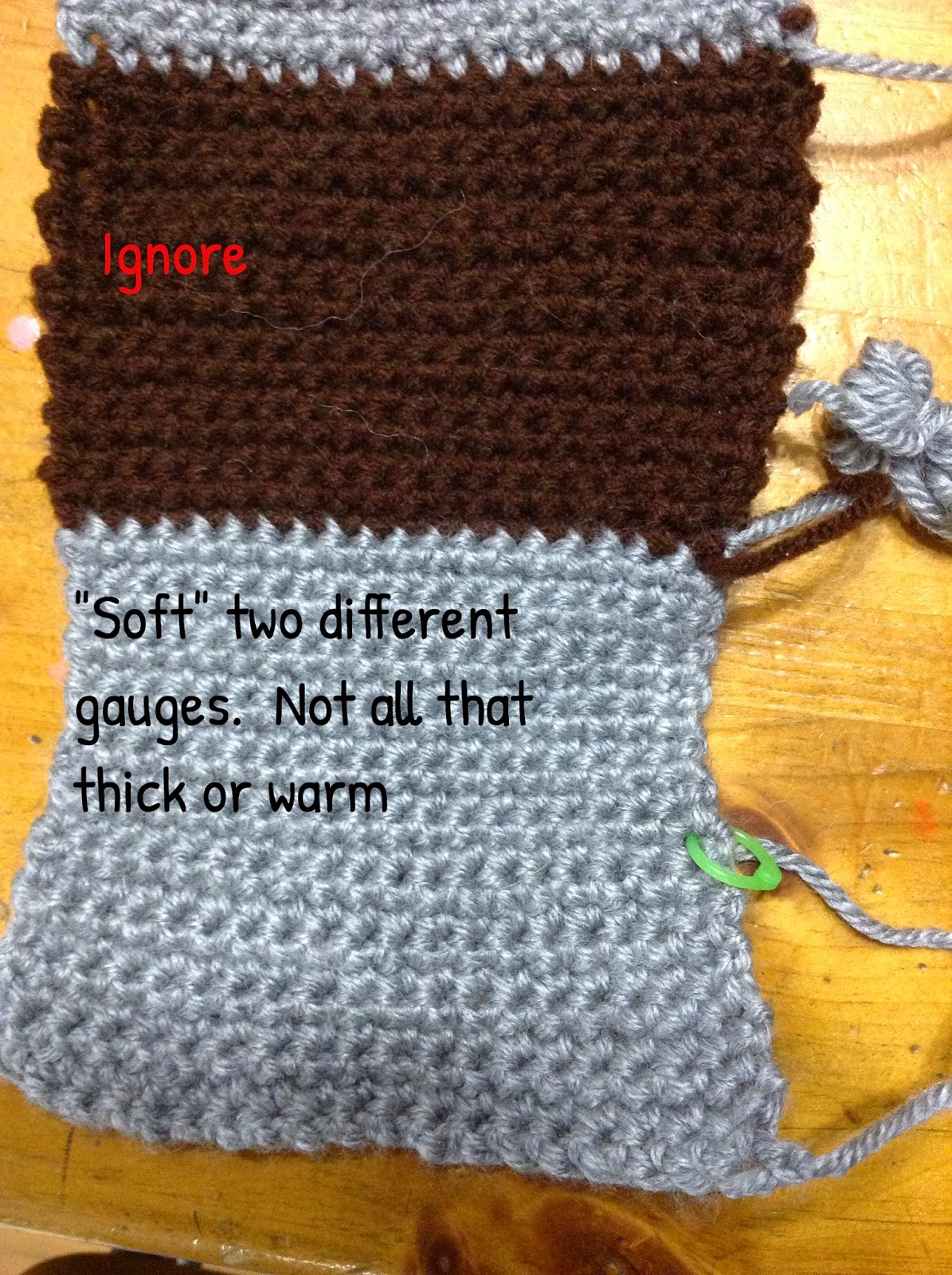 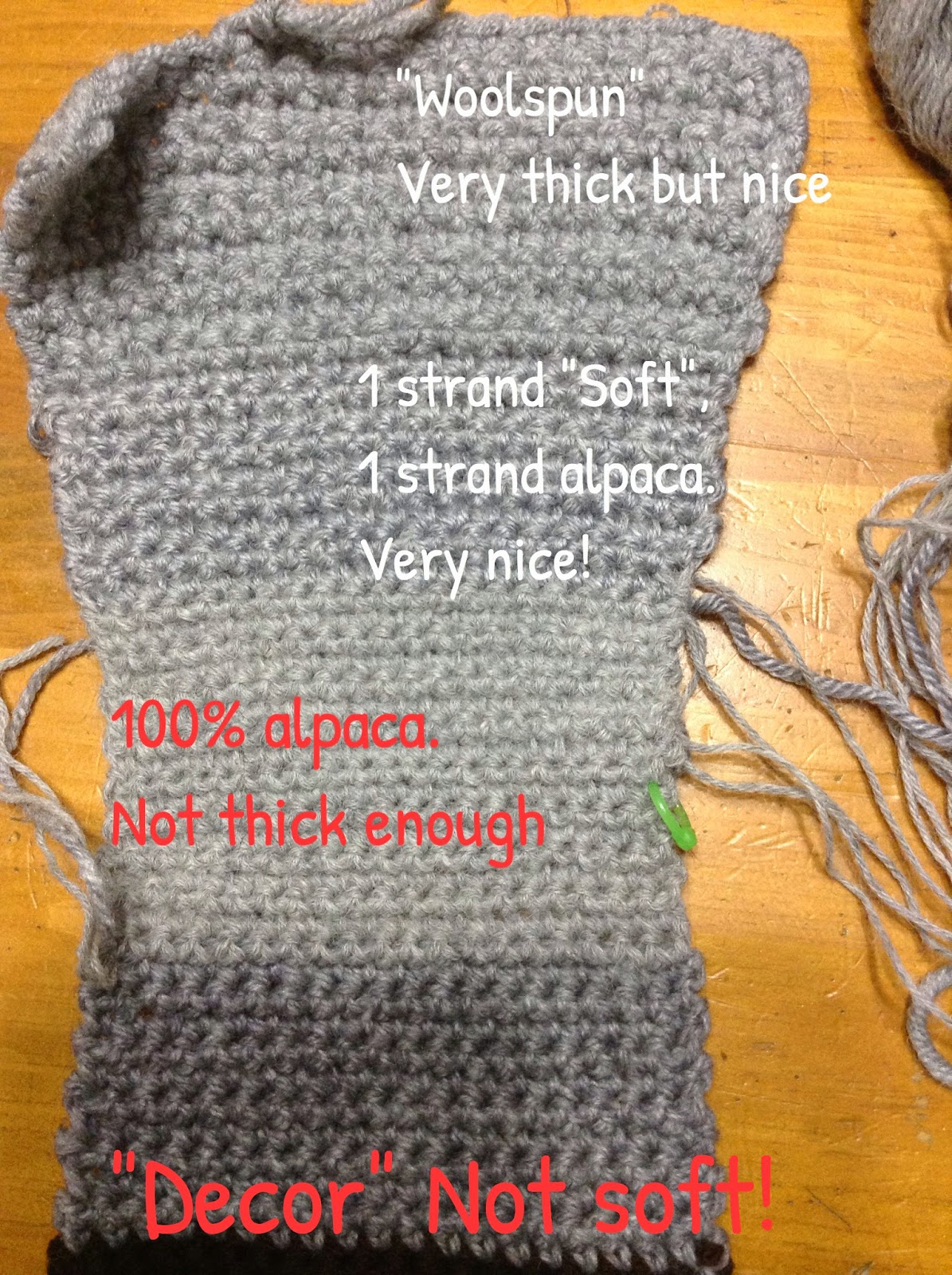 From the bottom, is Paton's "Decor".  It is not soft.  "Canadiana" is softer, but I didn't think it was really any better than Red Heart "Soft" except that it's by Patons, not Red Heart LOL.  Above the Decor is 100% alpaca ("Baby Alpaca" by Indiecita), two strands, and then three strands.  It's soft (as soft as crochet can get, it's a very textured fabric), but a bit too wimpy.  And, I didn't really want to use up all my grey alpaca, LOL.  Then I tried one strand of the alpaca and one strand of the "Soft".  I really liked that combo--best of both worlds.  Then I tried "Woolspun" since I had a bit left in the grey.  Definitely thick.

Mathew came over, and examined the swatches.  He asked about having it lined with fleece.  I explained that it could be done, but I wasn't comfortable with that, and it would probably add to the time needed since I'd have to create my own sewing pattern.  He wasn't sold on the "Soft" + alpaca because he liked the shine of the "Soft".  So we came to a compromise that I would make an inner hat in the alpaca.  Interesting idea.  This also meant that I can make the outer shell, get it off to an embroider, and work on the inner and the "extras", and the inner hat would cover up the backside of the embroidery! 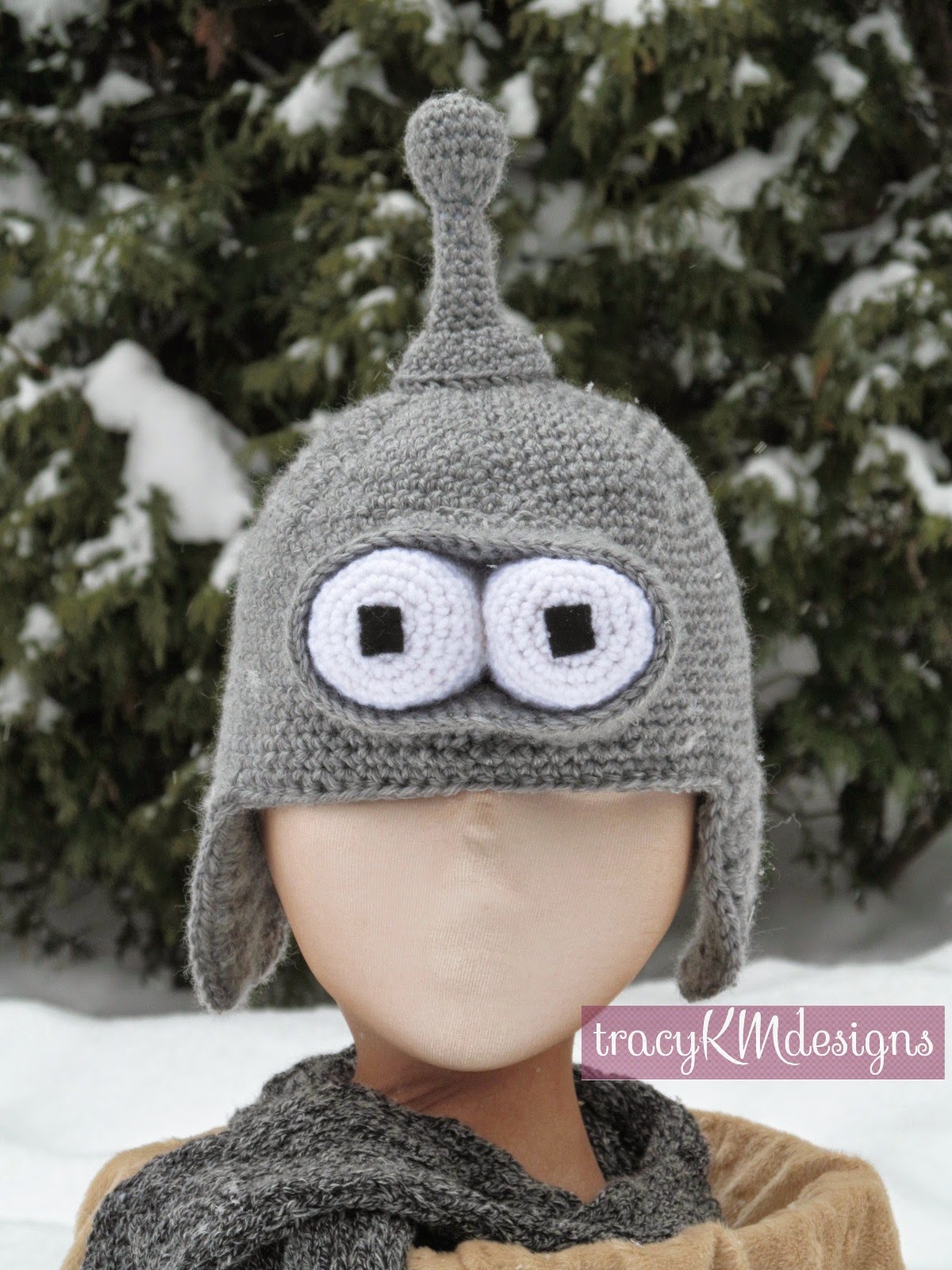 I had a hard time getting going.  It seemed that no matter what hook I used, it was going to be smaller than the pattern.  I had to consciously loosen up.  I mean, my swatch showed two different gauges, done with two different sized hooks!
I found someone about 30 minutes away who was starting up an embroidery business, and could do it (and she even picked it up).  By the time she picked it up I was almost done the inside too.  She used an interfacing on the inside, and pointed out that it greatly reduced the stretch of the hat.  I hadn't thought of that!  She said I could snip in between the words, to get back a bit of the stretch.  I trimmed as much as I could around the words, and that did help.  But it's something to keep in mind.  There was still the rest of the hat that stretched, but on a small hat, that could be an issue. 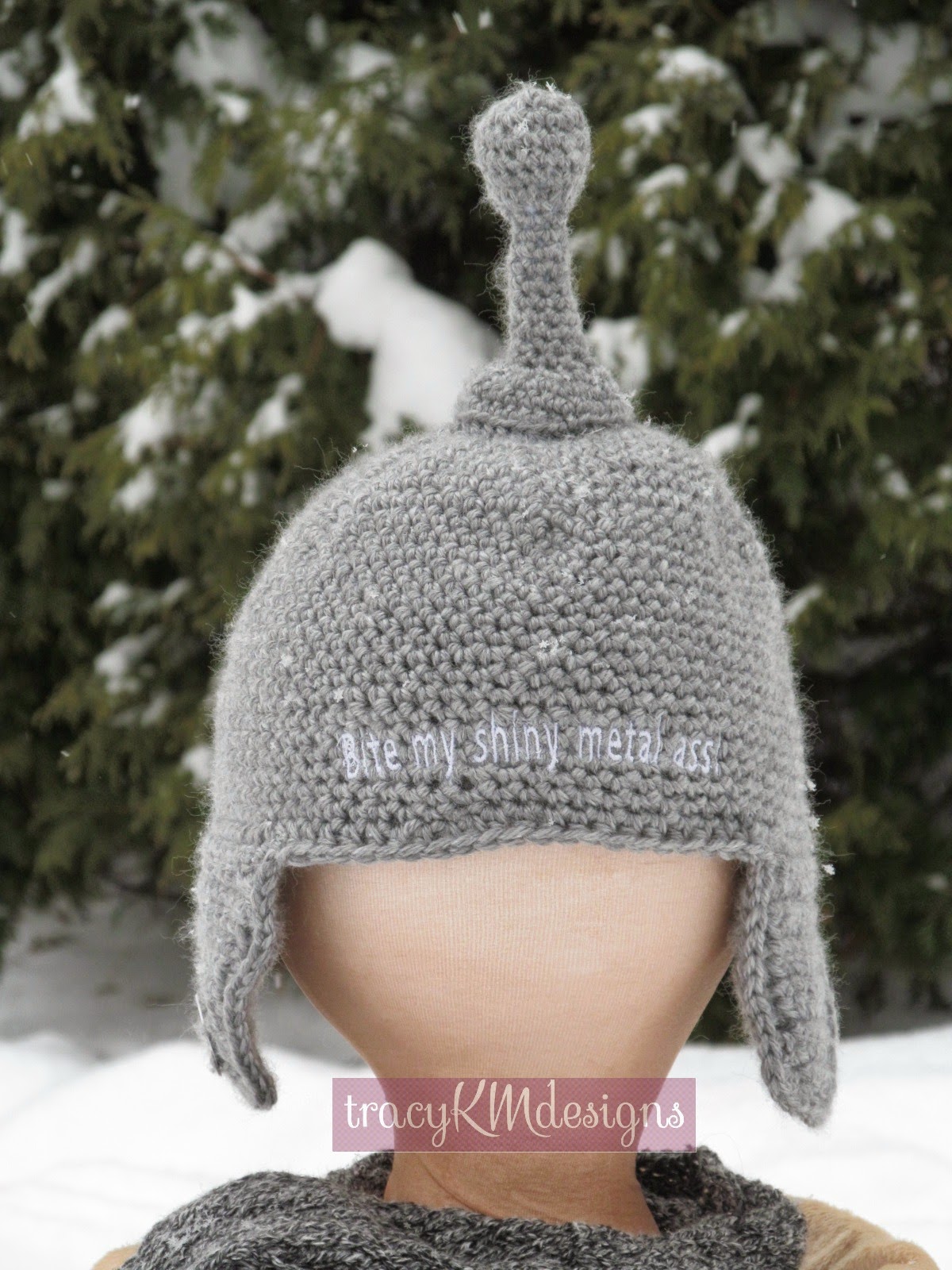 At first glance, it doesn't stand out too much, but when you back up and see the whole thing, it does show nicely.  But not too boldly. 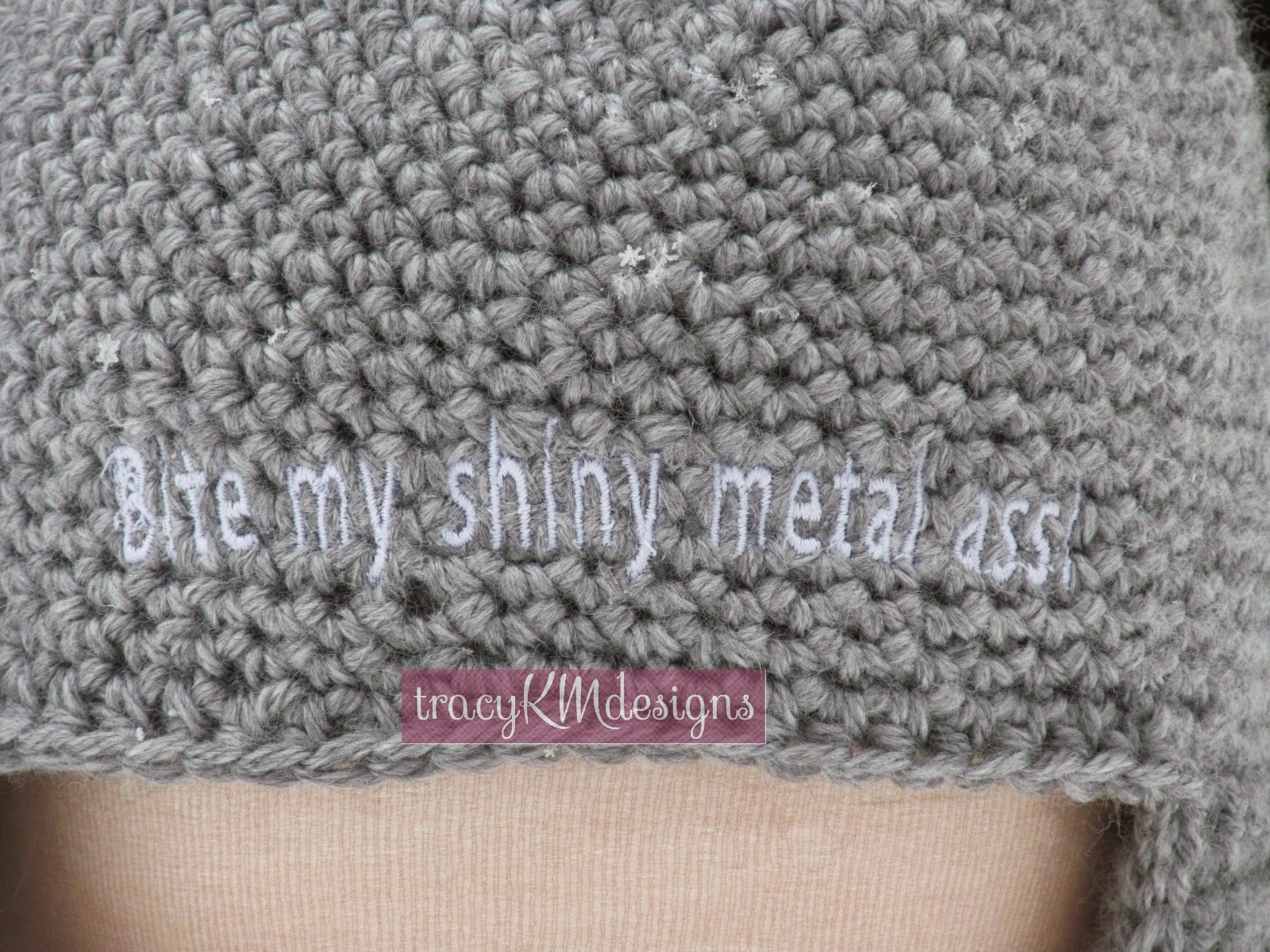 Once I had it back, I sewed on the antenna and the eyes, then crocheted the edging, joining both layers at the same time. 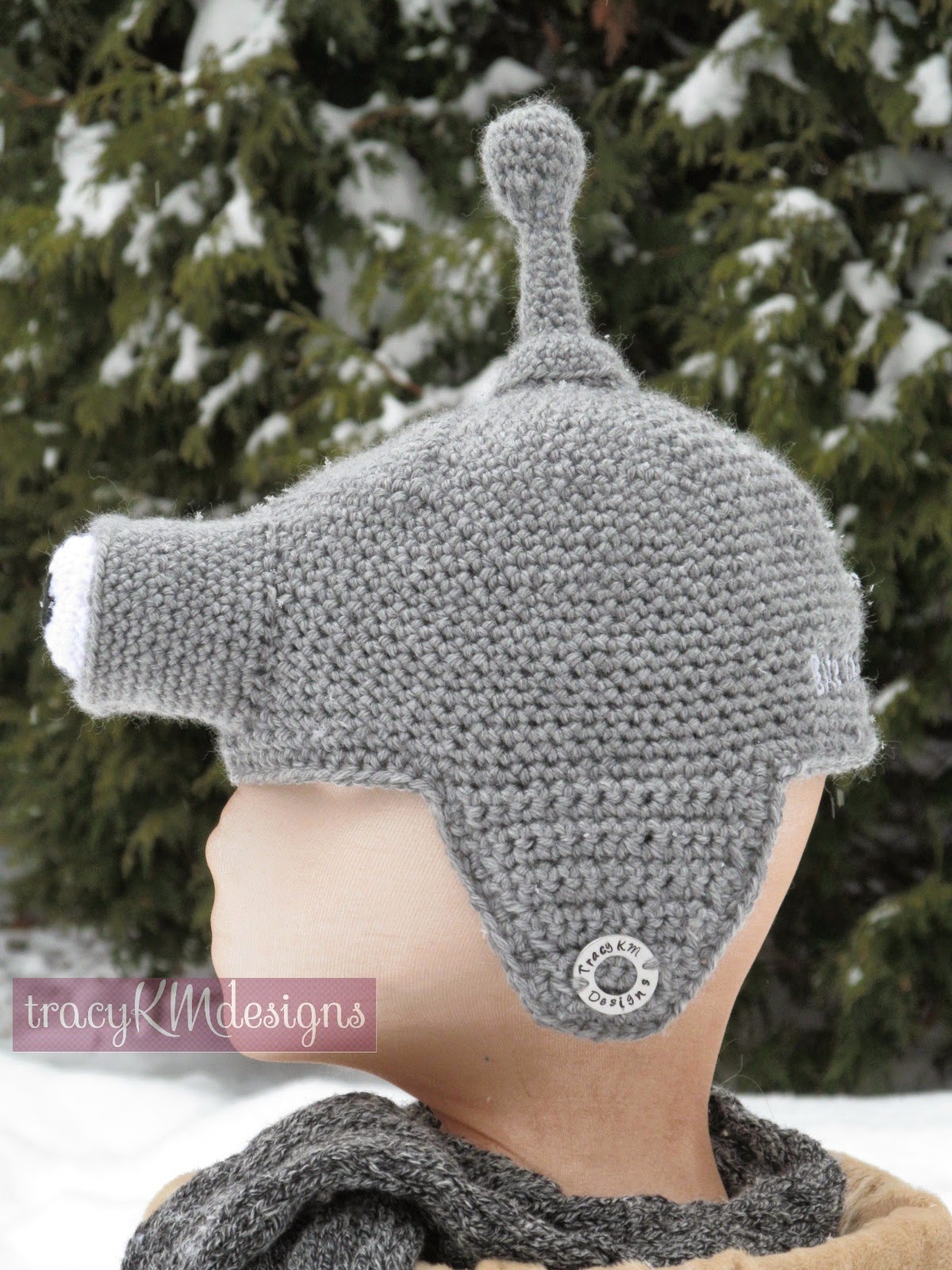 I wasn't sure if it was long enough.  It's kind of an awkward hat.  It's long over the forehead, so when it's worn, the eyes kind of angle upwards, which does bring the back downwards.  Most earflap hats I've made are a bit lower at the back. 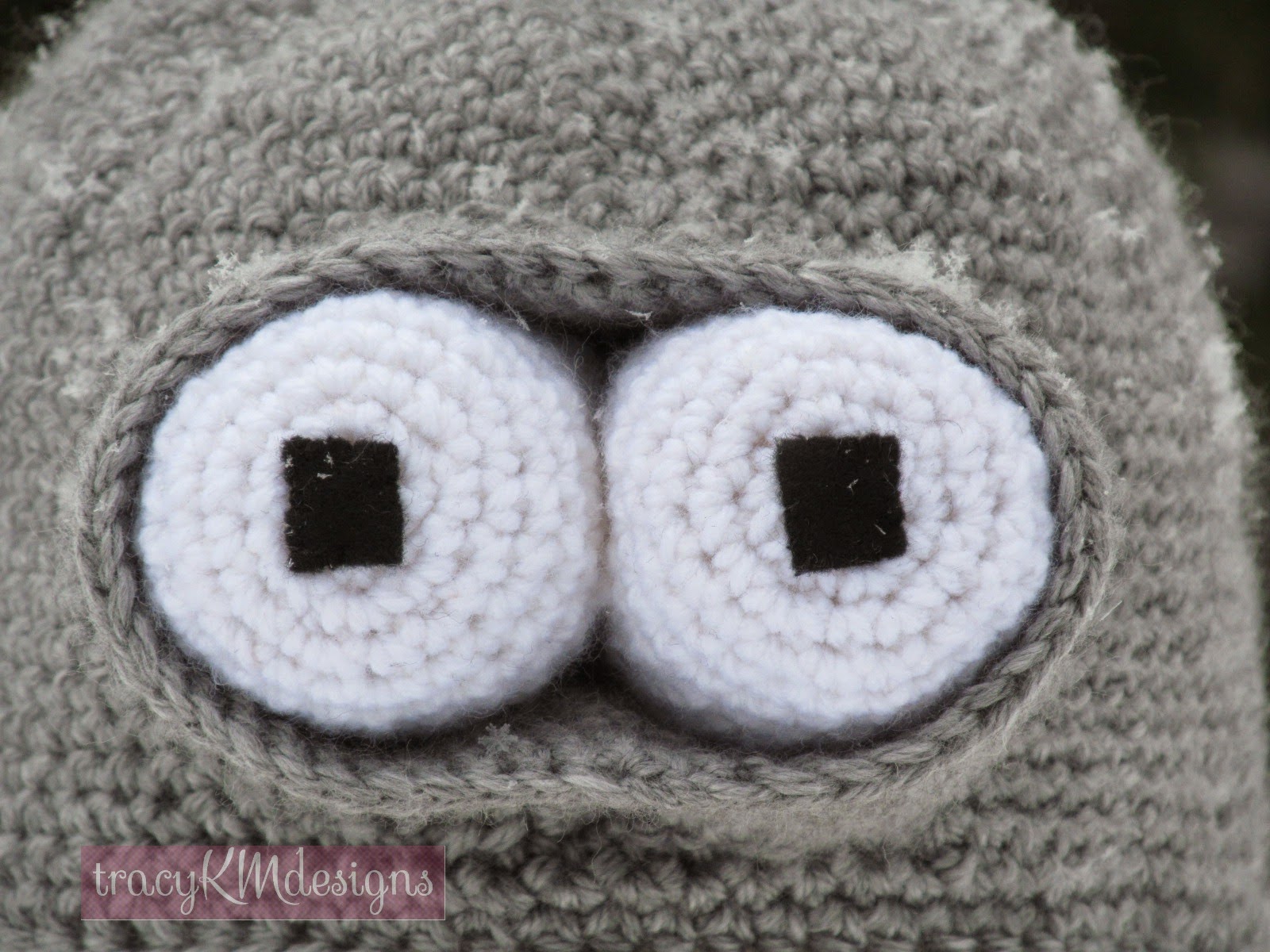 I used this picture as my business page and personal FB page profile, and several people recognized it right away as being Bender.  My SIL though asked me what it was...I had cropped it closer around the eyes and she said it looked like a pair of boobies :)

So, I had bought three balls of the "Soft"....and used slightly less than one ball, LOL.  I should have returned the other two, and that would have brought last year's totals under 10 000gr, but grey yarn is a great staple to have in the stash.