Back last May, or so, my cousin's wife announced they were expecting their first baby (she had two from previous relationships).  It'd been a while since I made a large teddy bear, so I was excited to start another one.  Then, about two weeks later, I found out that another cousin (his sister) was expecting....TWINS!  The Sisters-in-law were due just a few weeks apart! 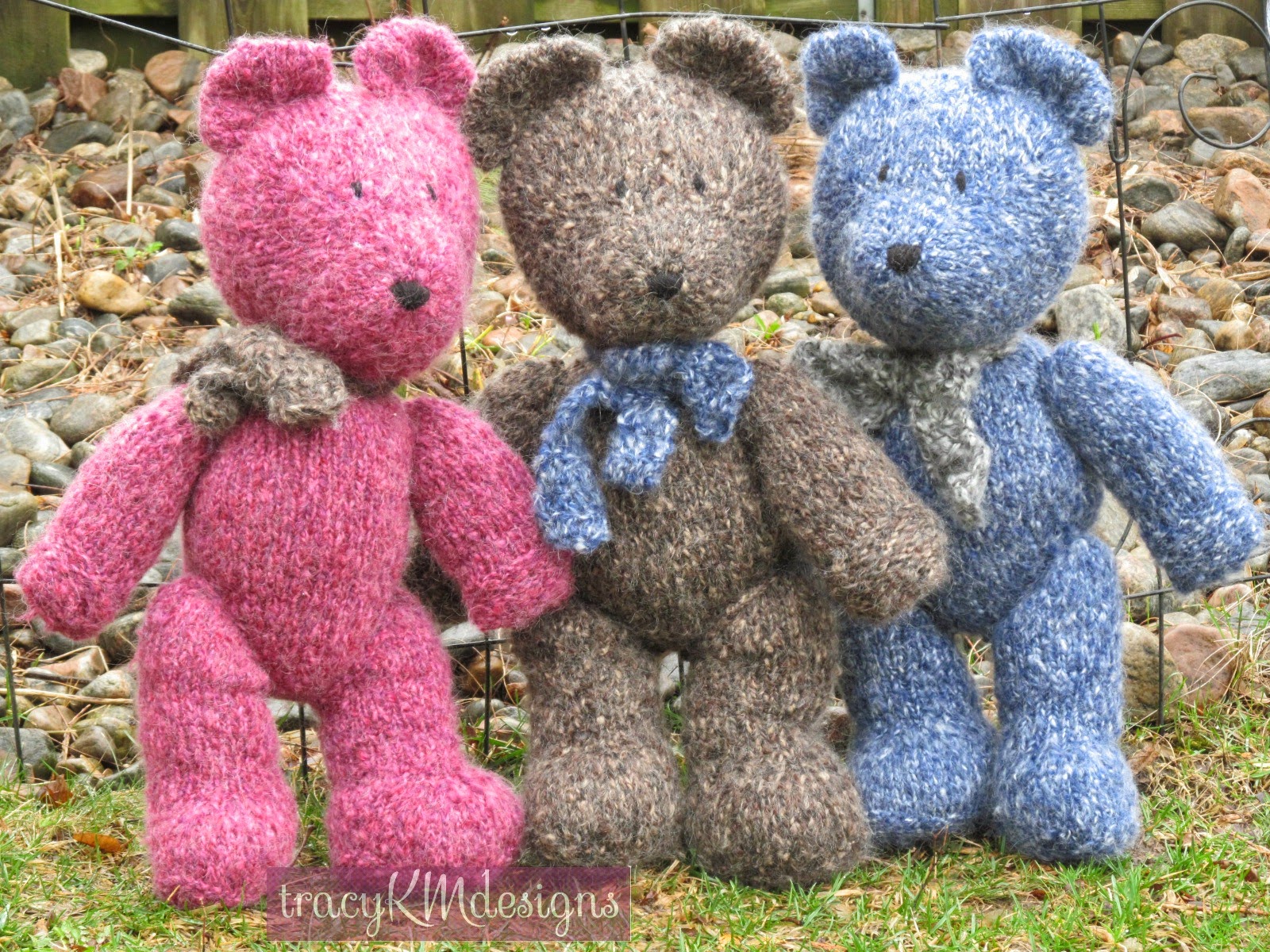 The single baby was going to be a boy, and the twins were boy-girl.  I decided for the single boy, he'd get a brown bear, and the twins would get one in blue and one in rose.  All these yarns are Patons "Divine", which I had used for the twins' big brother's bear.  I loved this yarn for his teddy bear, even though it doesn't show the detail well, it makes a wonderfully cuddly bear.  I'm so disappointed that it was discontinued.  I wish I had been able to go to the Spinrite tent sale last August and stock up.  Maybe this year.  I haven't been since 2009!!! 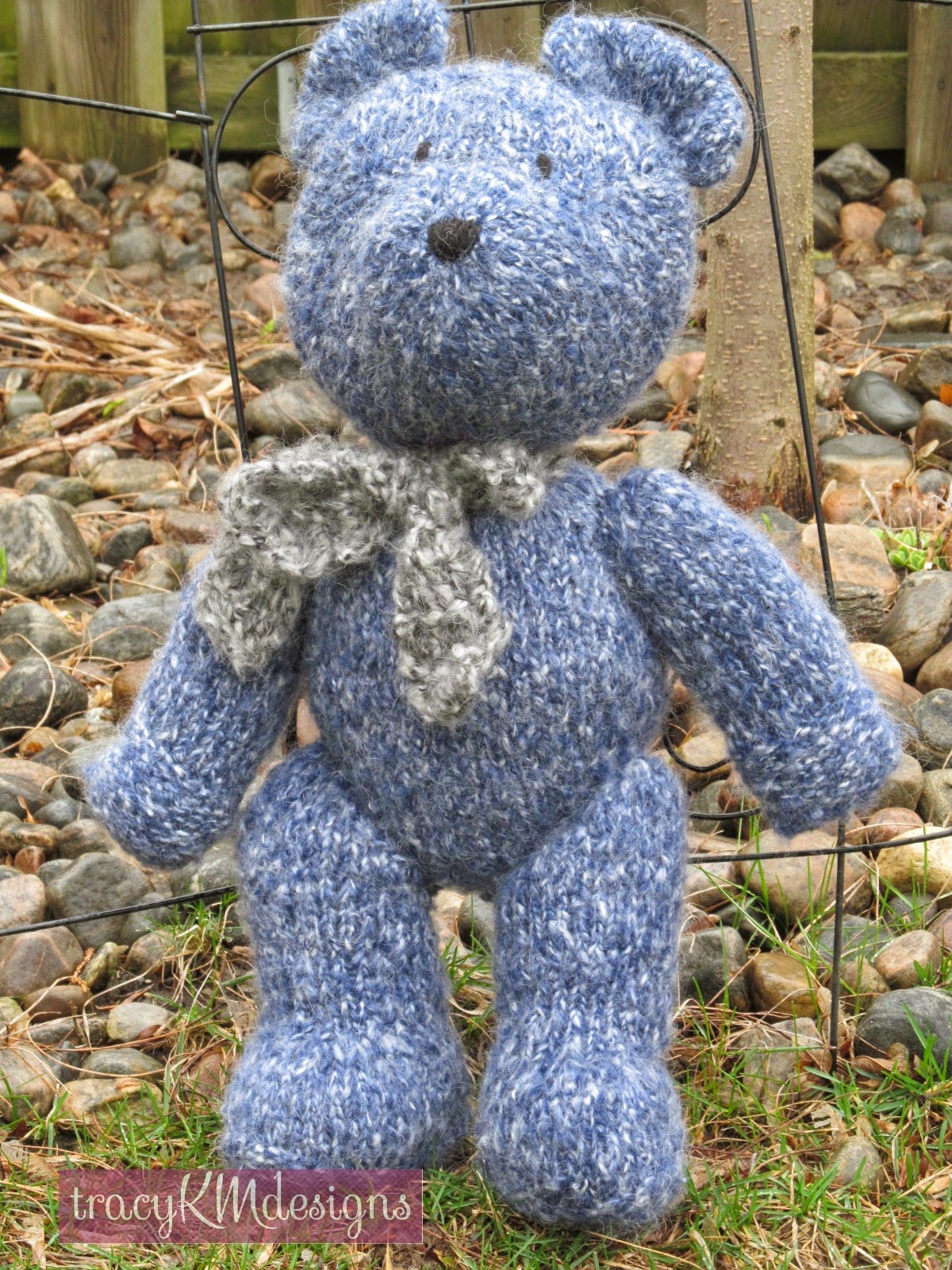 I got started on the blue one first, early August?  Then, I got swamped by hooded cowls, Pocket Buddies, Toothlesses, and more!  I had planned to have these done by last Christmas, but that blew past!  I got them done last week, and delivered! 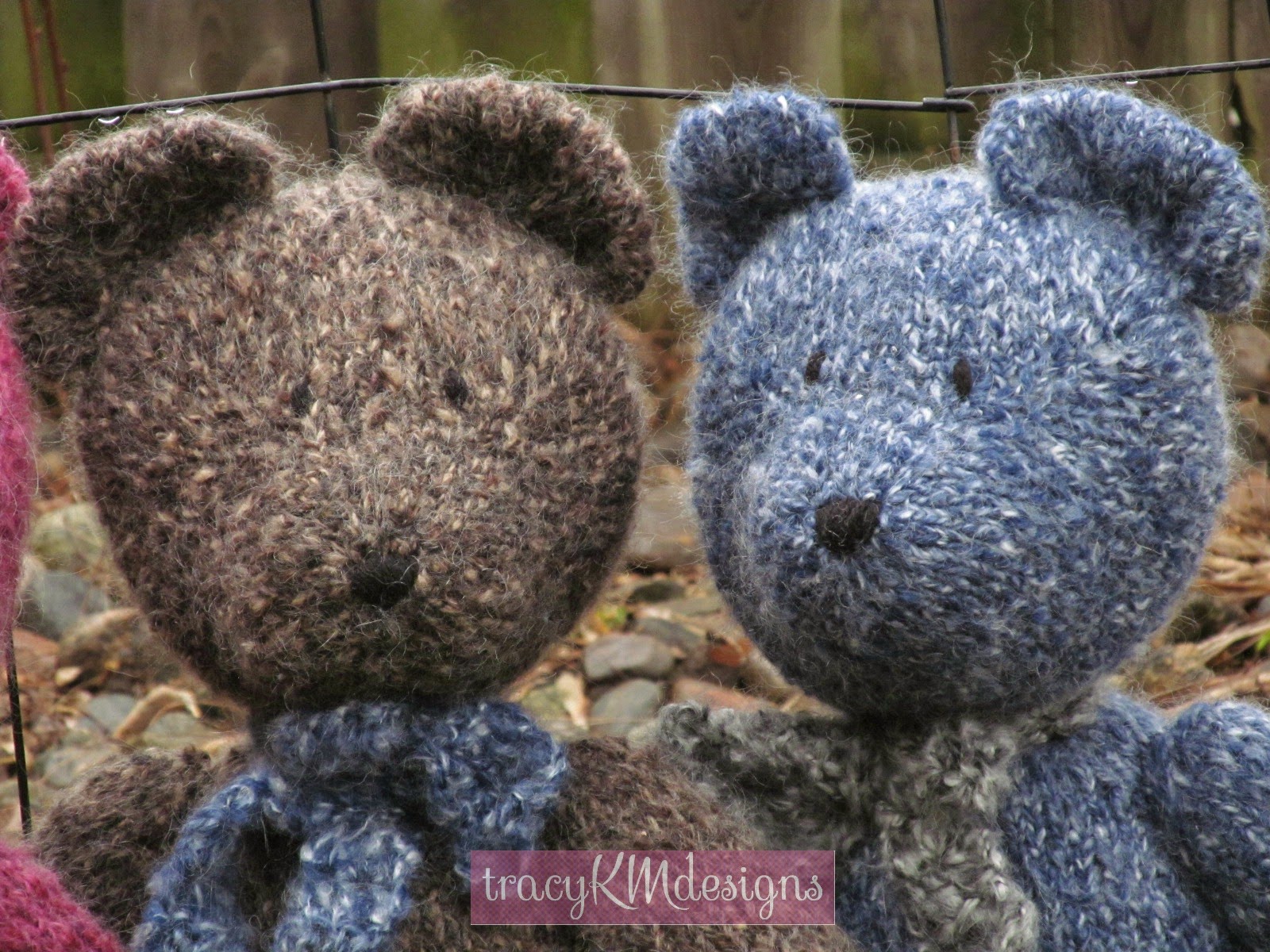 These are a Jean Greenhowe pattern, as mentioned in an earlier post... 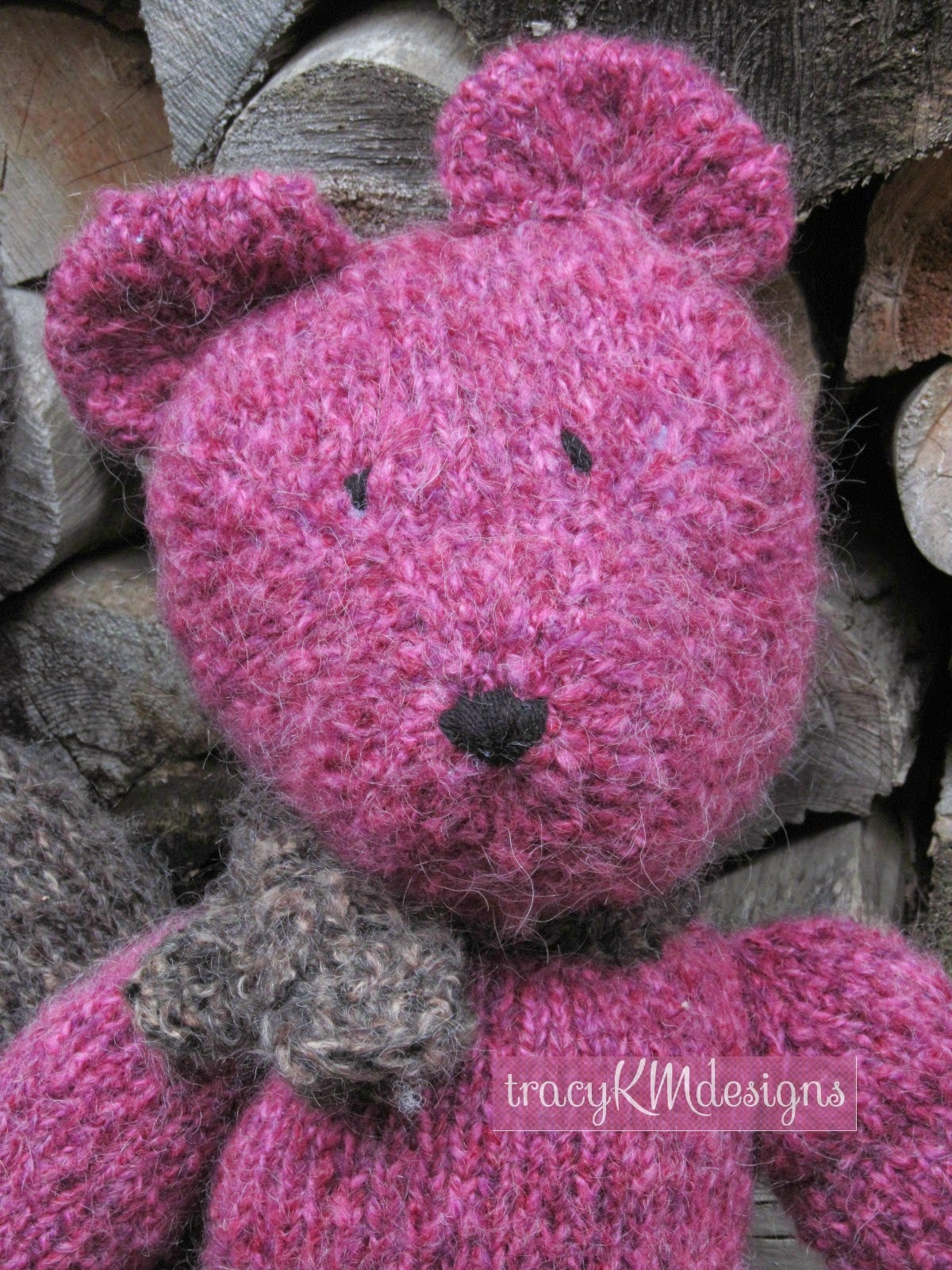 I've never done one in a colour before.  They've all been shades of beige, brown, grey, black, white... 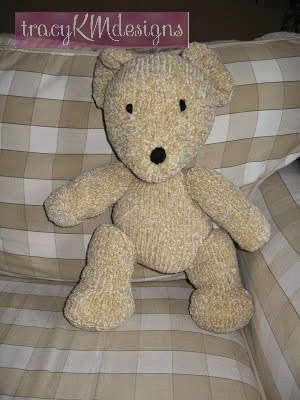 This one is a thick chenille, and I believe was made for the cousin of these babies. 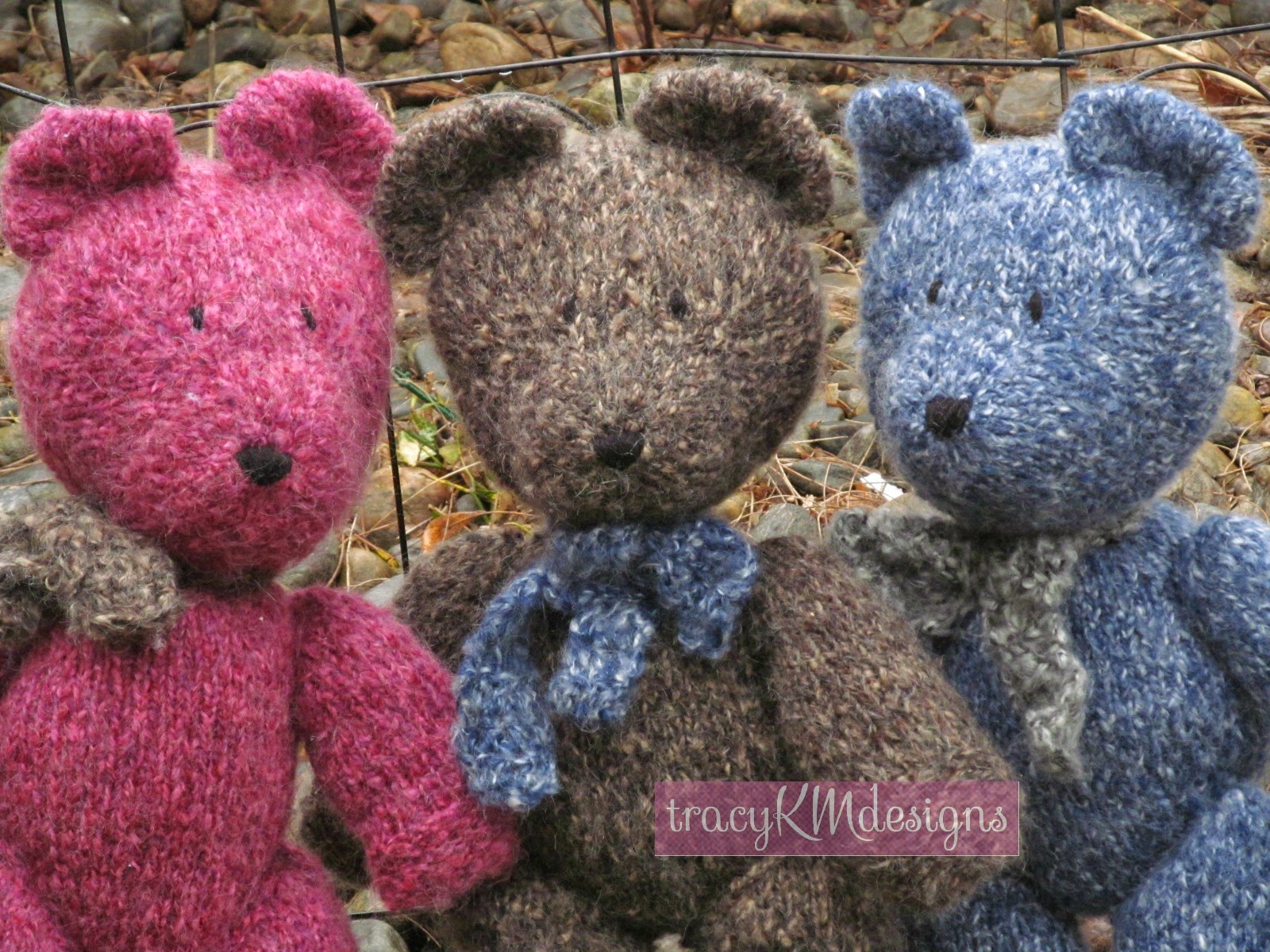 I usually use ribbon for the ties, but I wanted these to be more play-friendly.  I decided to crochet ties using the same yarn, but different colours.... 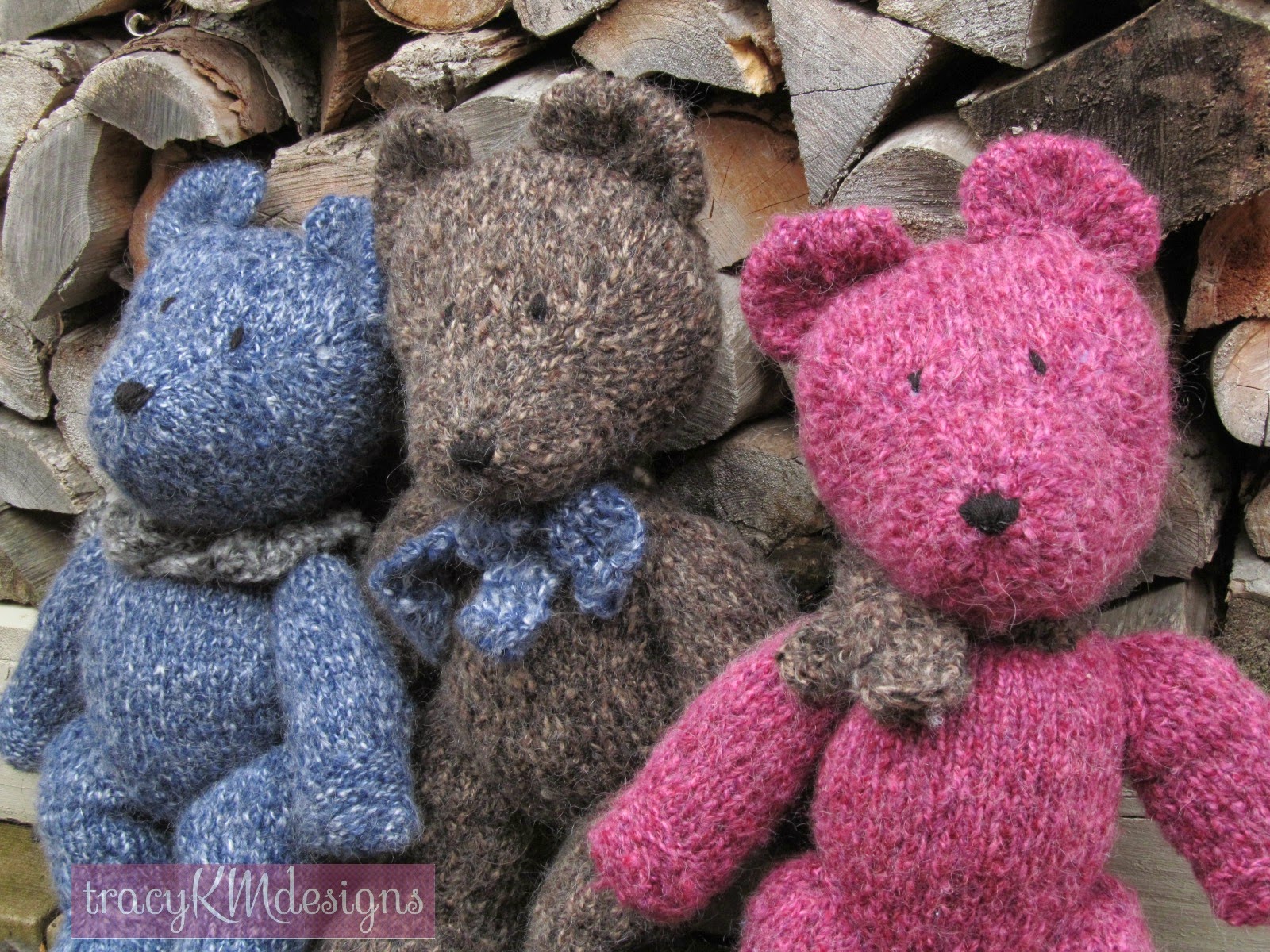 The boy bears could not have the rose yarn for a tie...so what to do for her? 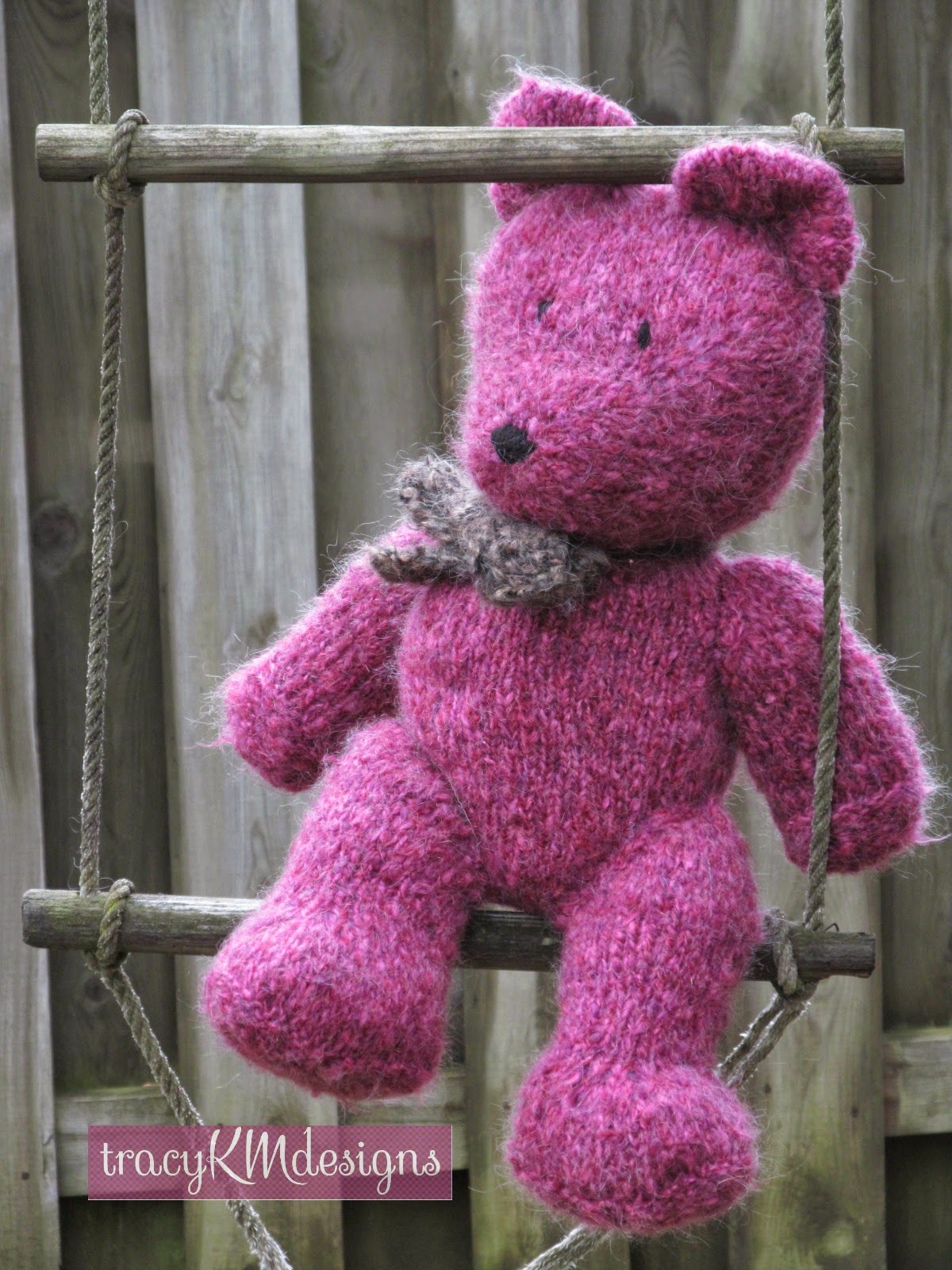 I decided to bring in the charcoal grey of her older brother's bear. 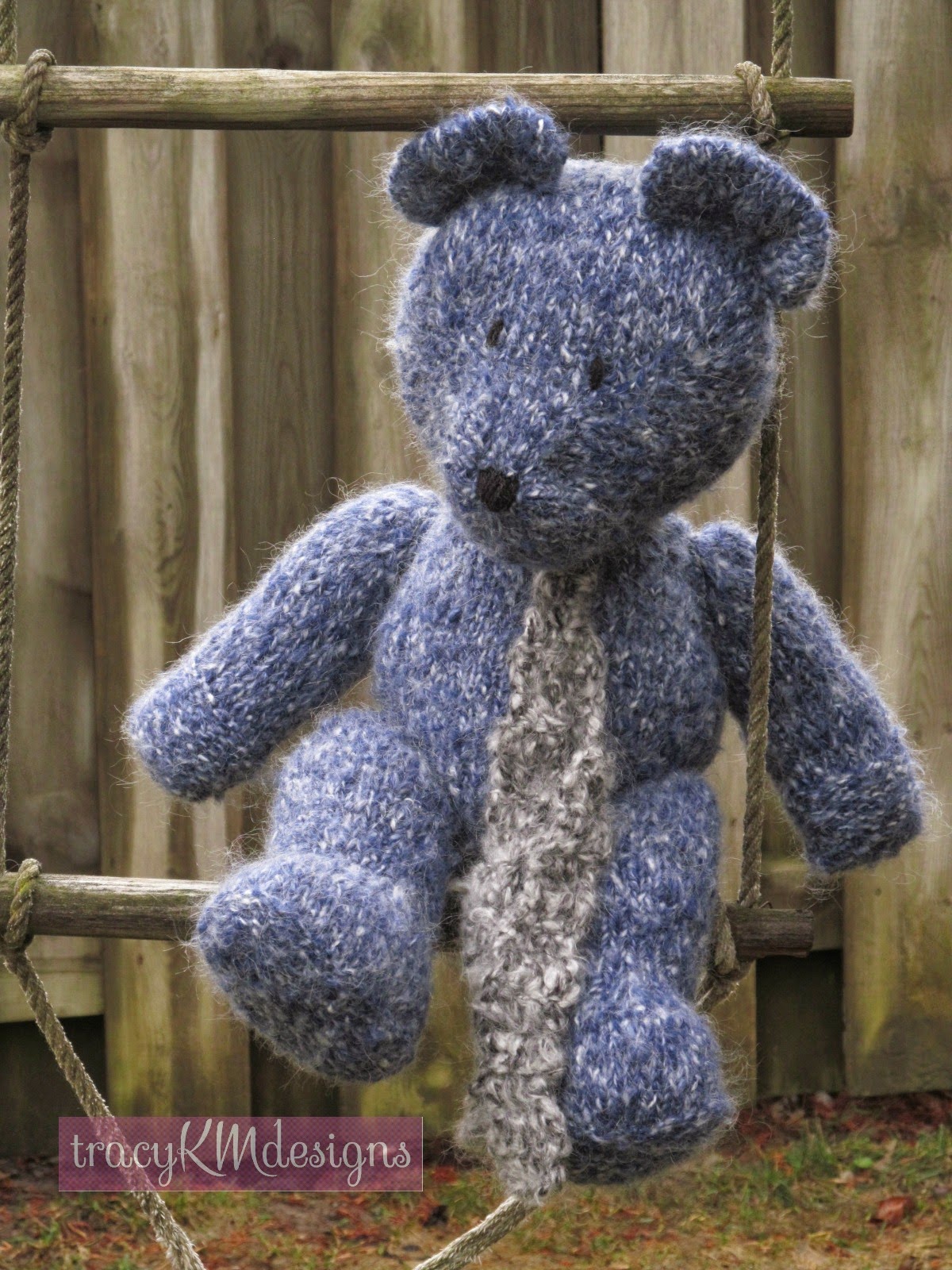 It worked out nice that I didn't like the grey scarf on the brown bear, so the twin boy bear got the scarf that matches his older brother's bear! 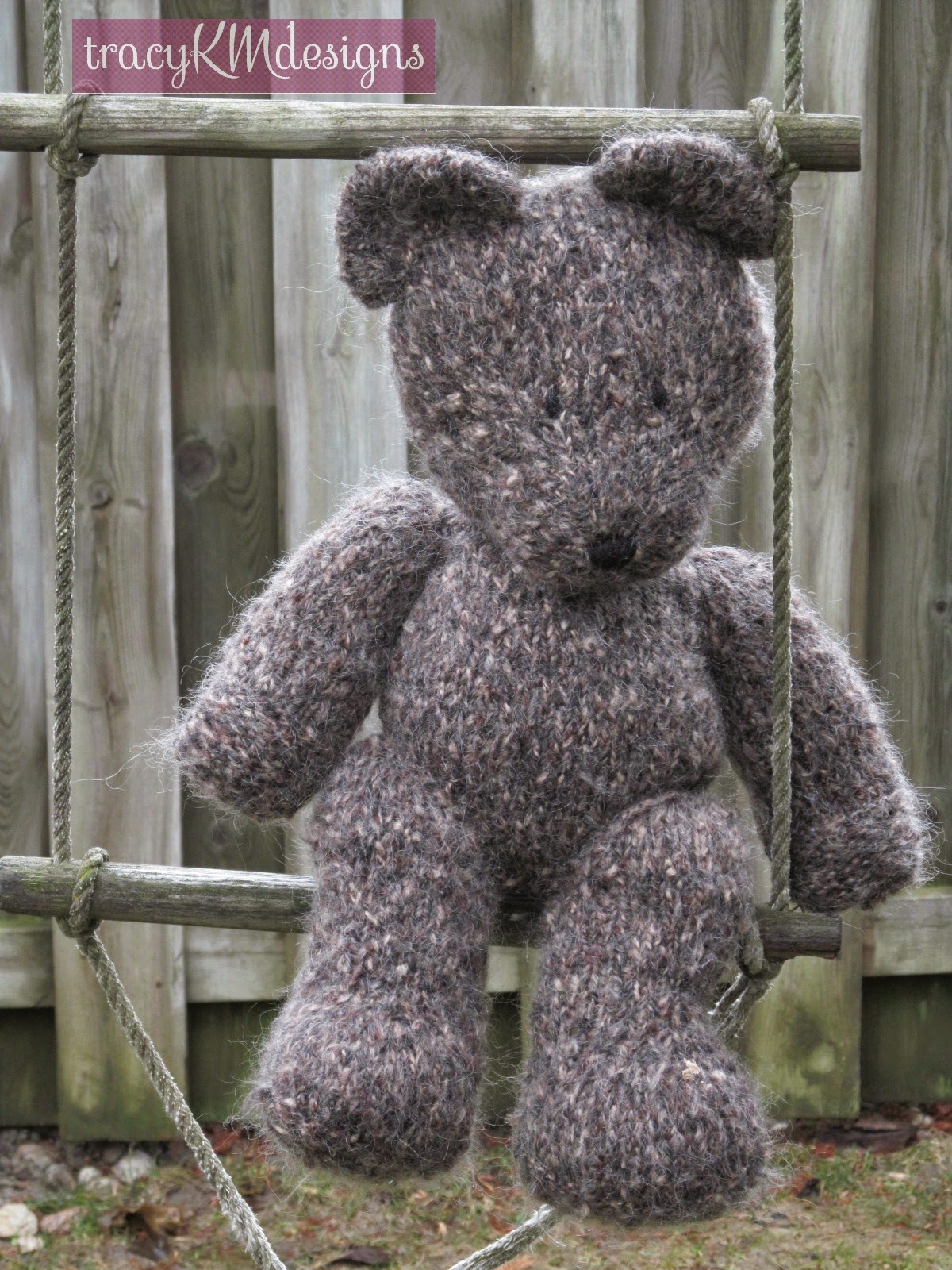 And the brown bear got the blue scarf...though here it is missing, LOL. 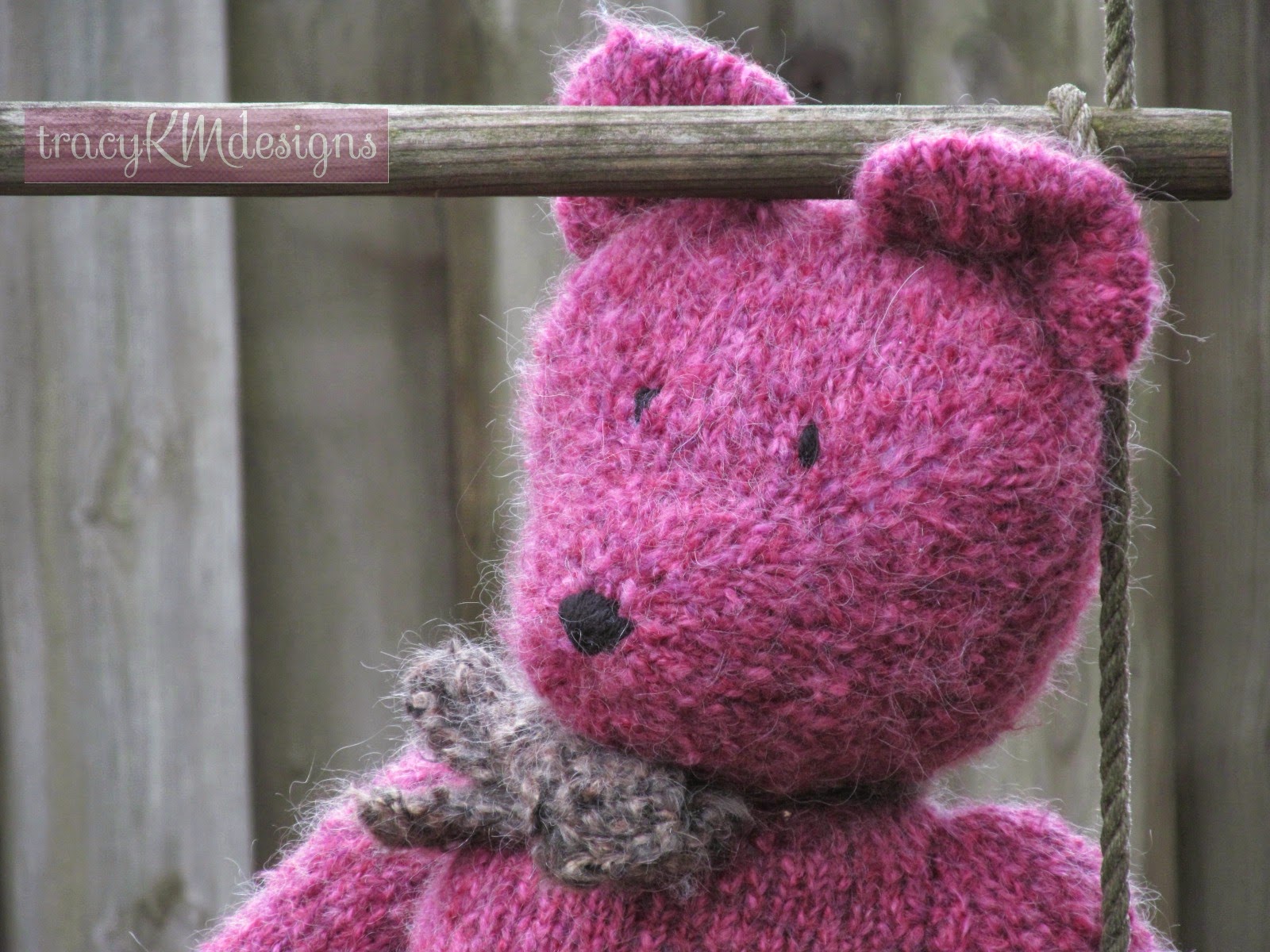 I love this picture so much it's my Facebook profile picture right now!

A gratuitous shot of the adorable foot detail.  This pattern is written to be knit flat, but I do it in the round.  I'm never sure the foot shaping is going to work, but it seems to.  Although they always seem to have one leg that turns outwards LOL. 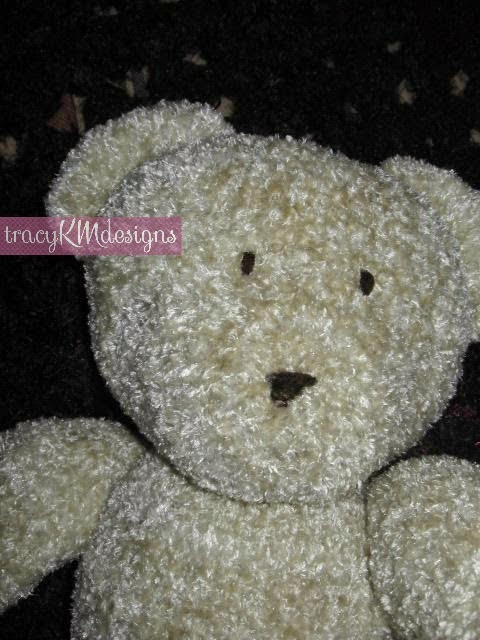 This is another one I made, back in 2006, just before I started blogging.  It is a VERY soft and slinky type chenille.  So slippery to sew together!

These were a little tricky to weigh, as I had to stuff the heads before finishing off the back.  Each bear weighed about 313gr, give or take a bit since each head was a bit different.  All together, 939gr, and the scarves were 48gr, for a total of  987gr!