I picked up some fabric from a destash. It was advertised as rayon spandex knit (I think...with being sick so much, a lot of details went poouff). It feels more polyester-ish though. It was supposed to be 2m but before she shipped it, the seller noticed that her daughter had cut it! By her description, I thought it would still be a good amount, but when it came, it was in two pieces and trying to fit this on was a challenge. I went with this New Look 6807 because I thought the looseness would cancel out any polyester. Longer sleeves means less body maintenance LOL. 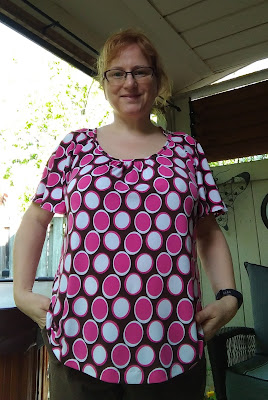 Not a great photo cause I was using self-timer LOL 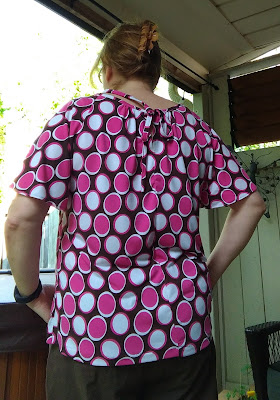 I tried to carefully match up the pattern on the back seam, but despite how the pattern looks, it's actually got a long repeat and is not flippable/reversible, etc. At least with the looseness, there's movement so hopefully it doesn't show too bad. 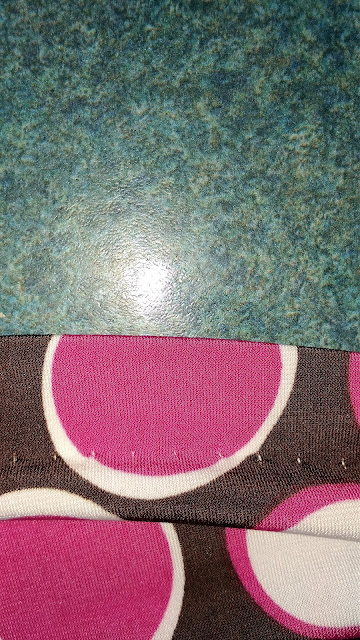 In many sewing groups, people ask about hemming knits. Twin needles is always the standard answer,or a zig zag. I have done lots of twin needle hems, but I realized that for a looser top or dress hem, it's not needed. I don't usually like zig zag hems unless the pattern hides it well. What I've been doing a lot of is blind stitch hems. It takes a bit of head scratching to make sure I have it folded right, but it ends up working out, has some stretch still, and is not distracting. I couldn't decide on what thread colours to use for this one--I think I was running low on the chocolate brown. So the white does show a bit on the right side, but again...it's a flowy top. 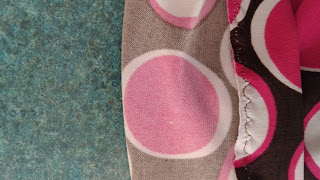 The backside. For some reason, even though I have it set to 6 stitch length (the longest stitch on my machine), the individual stitches are quite short. I'm not sure if that's how it should be, but I thought I had done it before with longer stitches. Maybe that was on wovens.

I really like this top/pattern. I have brown pants and shorts, and even bright pink capris. I have a pair of white capris with an animal spot texture...I don't know if that would look right together. I'm not sure I've ever worn the white capris cause I just don't know how to style the textured look and most of my tops are not plain LOL.