Back at the start of March Break, I had one blanket for charity finished, and was finishing up a second, when word came that they weren't going to collect anymore because of the current health crisis. I stopped finishing the second one and started another. Why not?

The group announced today that they had an urgent request for 120 blankets! I grabbed the almost finished one and got to work. All I had was a few ends to weave in! I've started working ends in by knitting with the tail of the old yarn and the tail of the new yarn together. So, they just needed a few rogue ends trimmed. It probably should have been washed too, but that'll get done probably before they get handed out. 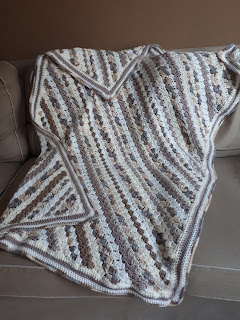 A corner to corner crochet blanket. 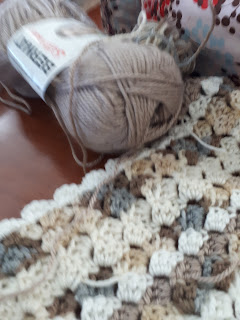 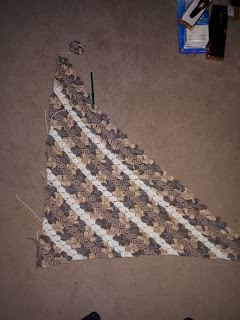 I originally started with this colourway, and did not like it. I hadn't even noticed how the multicoloured yarn was pooling, I was more concerned with how the solid beige yarn wasn't standing out like the cream yarn. Even though I had worked a fair bit, I wasn't happy, so I ripped it out. I might have also gotten to the halfway mark in the supply of one of the yarns, but not the half way mark of the blanket. 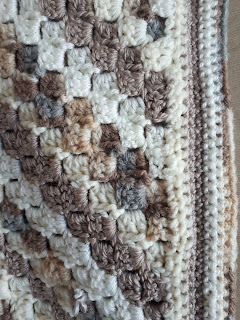 It ended up a smidge small so I crocheted a border.  707gr 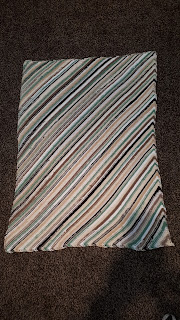 I had quite a bit of yarn left in the same colours, plus dark brown, and in the donated yarns there was the soft green. So I went back to basics, with a corner to corner garter stitch blanket, random stripes. I try to keep the stripes thin so that I can use up small little balls. As it was I was getting low on dark brown. I found a bit more and I think I was able to spread it out consistently. Just last week though, I found a skein of dark brown hiding in plain sight. 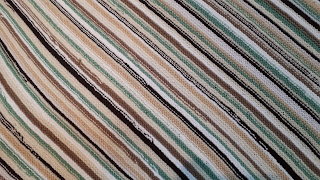 You can see how I double up the ends of the yarn to knit it in. 567gr 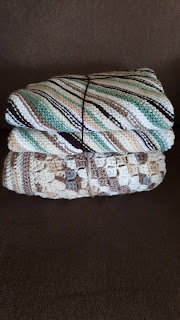 I had folded the first one all nice, so I folded the second one too. I folded it so the edges were on the inside of the fold. It looks so tidy, wrapped up.