I wrote in a recent post about Christmas stockings, a blanket that I had to rip apart to get more green yarn that was used in the stocking. I decided to get off my duff and finish up that blanket. Then, I measured the other similar one I did and saw it was too big. So I ripped it back and finished it up too. Then I looked at the multi-coloured one I did, and I knew it was way too big. I knit these on the looser side, which means as I lay them out to measure, it's easy for them to get wonky and not give a true size. When I ripped this one out, I rolled up the yarn as I went, so that I could just re-knit from this ball and save some time. However, I found as I got into the shrinking section, I was getting really long runs of the colours because the blanket was now narrower so the yarn that had done say, 5 rows before, could now do 8 rows. I did end up cutting some colours and moving on to the next, and also ended up with a baseball size ball of yarn left. So, I had to start another one. I weighed the first one, and weighed the remaining yarn. I was a bit short, so I grabbed a few balls of textured yarns to add in. I have a lot of single balls of textured yarn, or mohair, from when I was making newborn photography props. I'm not doing that anymore. However, they won't make good choices for charity blankets because many of them must be handwashed, or at least machine washed on a gentle cycle. 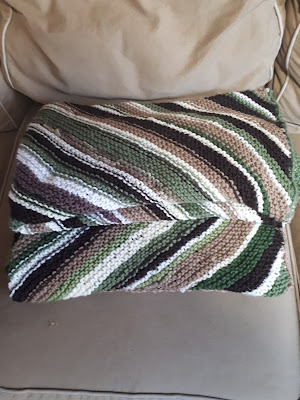 These are the first two, done in subtle shades of brown, beige, cream and greens. I'm pretty much out of these colours now, except for a ball of green and a ball of brown that I am still using in the latest multi-colour blanket. These weighed in at  476gr and 403gr. 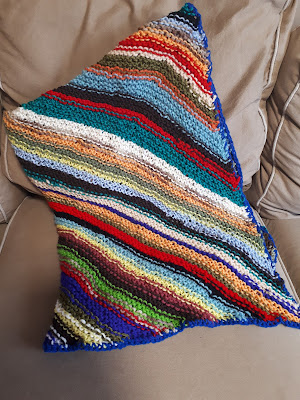 This is the one I've called "The World's Ugliest Blanket". I had no real rules, just making sure the intensity of the colours stayed random, and the length of the colours wasn't too long, or too many short sections before going with a long section. It weighs 407 gr. I'm going to round up these totals because there were a lot of ends trimmed up.

I should have one more blanket done (not the newest multi colour one) before New Year's. I also admit there is some yarn that came into the house that didn't get added to the totals. A ball of Woollike, and some cones. I don't count cones at all though LOL.