I wasn't going to do any Christmas sewing this year. Doing the custom stockings, and working part time, I just didn't want to add more stress. Then this 3D tree pattern was released. Although I didn't have a working printer, I knew Rob could just look at the picture of the pattern piece and draw me one! 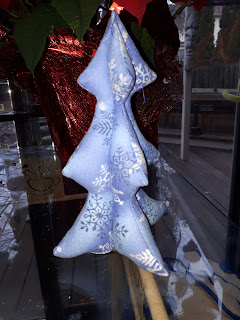 I really struggled with stuffing this. I was trying the big end of a really large crochet hook, but it wasn't working. I searched the FB group for Patterns for Pirates and a few recommended chop sticks. What? So narrow and pointy? I tried, using the larger end, and it actually worked really well. I'm not sure if I made that hole while stuffing, or if I clipped the corner too close, or what. It was a test run, but I wanted it to be nice anyway.

I thought these would make a nice gift for my SIL. She was doing a Christmas Eve event for us. She said her Christmas colour theme was red, so I had to go shopping! 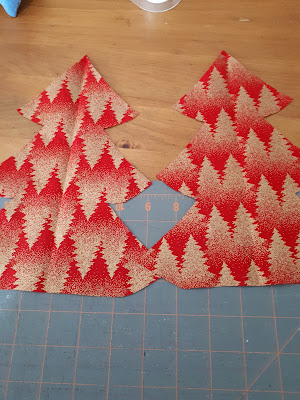 I found that if I flipped the pattern upside down, I could nestle the pieces really closely. However....totally forgot this one was a directional print!! It's almost like one of those pictures where if you look close enough, the foreground becomes the background and a different image pops out. I opted to cut more the right way up. I also widened the tree just a little by adding a bit to the fold, and I reshaped the boughs a smidge so they curved up instead of straight out. 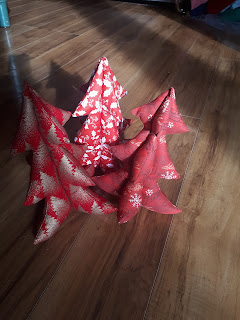 One of the other fabrics was directional, so I was smart enough to pay attention. One of the three is the original size. 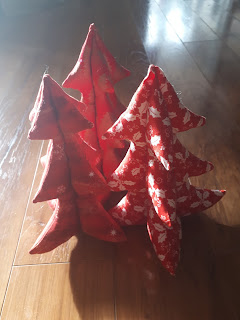 And since I was making my SIL something, I had to make my brother something. My SIL mentions everytime I make her slippers, that he would like some too. So I went shopping for boy fabric. I wasn't really happy with the selection. Nothing with snowmobiles. 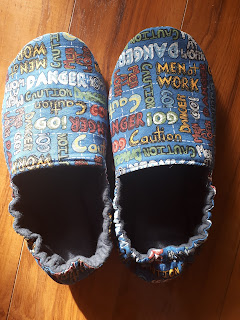 And that was all I sewed for Christmas. At least, that's all I remember sewing. I also made my first fruitcake. And I tried to make "hot chocolate bombs". That was pretty hysterical. My SIL actually did manage, using the idea I had for the mould, but I hadn't mentioned it to her! I wasn't able to find what she used though. Oh well. I tried!